Just a quick message for readers in the US and Australia - if you have a copy of the June issue of RT Book Reviews you'll find an update on what contestants from all five American Title contests are doing now. Worth a read for some great stories. And I'm there - right at the end of the article.
Posted by Evonne Wareham at 17:49 No comments:

Theseus : The best in this kind are but shadows; and the worst are no worse, if imagination amend them.
Hippolyta : It must be your imagination then, and not theirs.

I love this exchange from Midsummer Night's Dream - both the sentiment expressed by Theseus, and Hippolyta's waspish response. They're talking about the inept but well meaning theatrical performance put on by Bottom and his fellow artisans to celebrate the royal wedding, but both could equally apply to books.  The writer creates the shadows, for stage or page, but the reader brings something to the party too - their own imagination.

Monday was World Book Night (As well as being Shakespeare's birthday) and I attended an event held by Cardiff University's BookTalk - a king-size version of a book group -  which celebrated with a discussion of one of the books on the Book Night list  - Daphne Du Maurier's Rebecca. 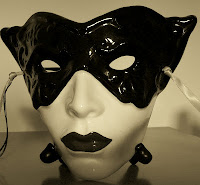 I've frequently speculated about writing a Gothic romance, and a trip to Walpole's Gothic mansion at Strawberry Hill is high on my list of Places I Really Want To Visit. Anything to do with what is possibly the most famous Gothic novel of them all has an irresistible pull.
Before the discussion of Rebecca, expert speakers took us on a fascinating canter through fashion, architecture and the Hitchcock film.  For me it threw  new light on the working of the imagination in relation to the book and the film, particularly about the creative power of the imagination.
Manderley, Maxim De Winter's home, is virtually a character in the book. I would hazard a guess that most people who have read Rebecca would be able to describe it in detail, but apparently the physical description of the house in the novel is minimal - I shall be checking that one out on my next reading. The Gothic image might be fixed from the Hitchcock film, but the house in the famous film does not exist either - they could not find a real building suitable, so Manderley was created from models and stage sets.(The fact that the filming took place in California, not Cornwall, might have contributed!) I would also have been prepared to swear that there is a depiction of Rebecca in the film - it is so strong in my mind that I can see her standing on the deck of the sailing boat, laughing - but she is actually never portrayed, except on some of the posters advertising the film. Hitchcock uses clever technique to suggest her presence, without ever making her real. An eponymous  ghost, hovering over Maxim and his new wife, recreated by her clothes, her rooms and possessions, her costume for the ball, but never in person. It was all the power of my imagination, as reader and viewer.

There is frequently debate about the fashion for headless heroines, and heroes - the book cover that depicts a figure from the chin or neck down, or from the back. But cover artists and publishers have a point - the reader can imagine whoever and whatever they  want, without having their image fixed by someone elses's taste. And if I'm anything to go by, the reader can imagine quite well for themselves.

Posted by Evonne Wareham at 01:00 No comments:

Today I dodged the showers at the Royal Horticultural Society Show at Bute Park in Cardiff, bought far too many plants - and some artisan chocolate that I hope is going to taste as good as it looks - and snapped a few of the show gardens. This is the kind of thing I imagine Kaz designing, and building. These aren't quite as big or as grand as the ones at the Chelsea Flower Show, but you get the idea. I didn't get wet, but is was a close call. Last year the weather was hot and sunny and we ate two ice creams each. This year hot soup would have been more appropriate!

Posted by Evonne Wareham at 21:21 No comments:

This week is the first UK National Gardening Week. The Royal Horticultural Society is putting on all kinds of events to celebrate gardeners and encourage more people to take it up. You can find out more at http://www.nationalgardeningweek.org.uk/

Right - so that's very nice to know - but what has it got to do with books - other than gardening books, that is?﻿
Well - I like gardening. Even better, I like going to gardening shows and visiting other people's gardens - all the fun, and none of the work. So - when I was looking for a career for the heroine of Never Coming Home, I decided to make her a landscape gardener. I wanted an unusual career, and one that would demonstrate her artistic talents in a way that would not impress her father, who is a famous artist and a terrible snob about people who can't paint. I made her a very successful designer, who has won medals for her gardens at the Chelsea Flower Show but who is also a hands-on gardener. I thought I knew just enough about both to be able to bluff. It's worked so far!
And this is where the first coincidence comes in. When I read about Gardening Week and thought it was a good subject for a blog post, I checked up on what special events were planned. And today proved to be Careers Day - highlighting the possibilities of gardening as - yes, a career. Just like Kaz. Neat, or what?

﻿
﻿ And it gets better. The day is being hosted by gardener/author/TV presenter Alan Titchmarsh. And Alan is also one of the plenary speakers at the Winchester Writers' Conference this year. I have a special place in my heart for Winchester, as I was a finalist in their competitions on a number of occasions. Never Coming Home was one of those finalists, in the first 500 words of a crime novel category. I'd encourage anyone trying to get themselves published to have a go at the Winchester contests - there are a lot of them, in all sorts of categories. You don't have to be attending the conference to enter, although the entry fee is slightly lower if you are. And if you're there, you have the magic chance of seeing your pen name on the finalists board at lunch time on Saturday. Which means walking around in a happy daze for the rest of the day. You can't beat that feeling. If you attend the conference you also get the chance at workshops and panels, individual interviews with editors and agents, meeting other authors - it's a fun weekend. Booking is open now
http://www.writersconference.co.uk/

So - that's gardening ... and coincidences.
Posted by Evonne Wareham at 11:16 No comments:

Confession time.
I'm currently in grave danger of succumbing to two of the seven deadly sins. That would be pride, and envy. And the source of this temptation? A perfectly innocent magazine - RT Book Reviews.

Making the final of the American Title contest, which was run by RT and Dorchester Publishing, was a big turning point in my career as an author. Never Coming Home was actually written while I was taking part in the contest with another book, Out of Sight, Out of Mind. And that book will be published by Choc-lit in 2013. So the magazine has a rather special place in my heart.

This Saturday the May 2012 edition of RT Book Reviews dropped through my letter box. It takes a while to get to me, as it has to swim the Atlantic first, but it was worth waiting for. Never Coming Home was reviewed in the  romantic suspense category, and was awarded 4.5 stars with the comment that it was a 'nerve-wracking thrill ride filled with deception, base emotion and death and a tempestuous love story.'

What can I say, except thank you? The book has come full circle. When I sent the manuscript off to enter American Title I never dared think that I would one day get to see the published book reviewed in the magazine. It was a dream.

But this year, dreams are coming true.

So - that's pride. But what about envy? Well - today is the first day of the RT Book Lovers Convention, which is taking place in Chicago. Friends Trish Milburn and Barbara Longley from American Title will be there, together with Lynne Connolly from the Romantic Novelists' Association. They will be signing books at the huge book fair that is part of the event, meeting readers, attending balls and cocktail parties, mixers and brunches and generally having one heck of a good time. And I am sooo envious. I want to be there too.
Maybe next year? In Kansas City?
Posted by Evonne Wareham at 22:13 No comments:

Easter at Choc-lit - and a Certain Rabbit

If you check out the Choc-lit authors' blog you'll find us celebrating the holiday weekend with a few Easter memories.

And on Saturday the Choc-lit new book for April is officially on the run.

Spend a few hours in the company of Sophie Green and you soon find out why the rabbit runs - murder charges, men with guns, explosions. It must be Tuesday.
Posted by Evonne Wareham at 10:10 No comments: 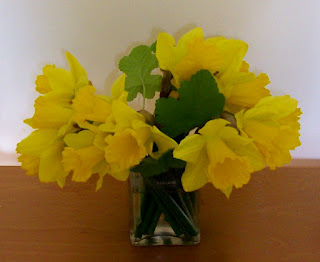 It occurred to me today that if the book was taking place in real time, the events of Never Coming Home would be starting soon. My hero, Devlin, makes a business trip to London in late April and decides to pay a call on Katerina Elmore. It's not a visit he wants to make, but a sense of obligation and a certain amount of curiosity drive him to do it. And what he finds out when he meets her ...
Well, that's the rest of the book.
In that early scene, Devlin is looking at the window boxes outside Kaz's home. He doesn't know much about flowers, but he can recognise a daffodil when he sees it. Yet this year the daffodils in my garden and almost over, and it's only the beginning of April.

It's a good thing books take place in their own time.
Posted by Evonne Wareham at 01:20 No comments: