Compliments of the Season


A very Merry Christmas and a bright and brilliant New Year to everyone.


And if you haven't read it yet and are looking to top up your e-reader with something a bit different for Christmas - don't forget ... 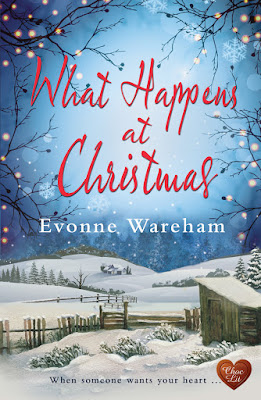 Never Work with Children and Animals

That's reputed to be an old saying in the movie industry.

In What Happens at Christmas, I did both.

I have no idea where Misty - the heroine's four year old niece - and Griff, her very independent minded cat, came from, but they were an essential part of the story. And as soon as I knew there was going to be a cat, my thoughts immediately turned to Ming. And he became a kind of pattern for Griff - not in personality, because Ming was a much gentler cat that Griff is - but the fact that he had a big enough spirit to become a family legend.

Most of Ming was white chinchilla, but he had a patch over one eye that was ginger and so was his tail. My Mum said it looked as if it had been stuck on. I can only go by what my Mum said, and a few old and blurry photos, because Ming actually died before I was born.

But he was remembered. And that takes a cat with personality, which is what I wanted for Griff. There were all sorts of family tales about Ming. He arrived home as a tiny kitten in my aunt's handbag - one of a litter from a girl she worked with. He was covered in lipstick and reeking of scent, as all the girls in the beauty salon had kissed him! My Mum named him, as naming of  family cats was apparently her job, and as London Zoo had just acquired a new panda, called Ming, that was what he became. (Although apparently the original panda was a she, who has recently been immortalised as a statue at the Zoo. )

And then there is the family legend - Ming was a very loving cat, who would meet my mother and my aunt at the bottom of the street on the way home from work and follow them home, jumping from wall to wall,  and he wasn't supposed to sleep on the chairs, but my grandmother always knew, because of the white hairs and ...

Well there are countless stories, and I wanted to create that sort of cat. I hope I have, with Griff.

And that's why one of the dedications in the book is to commemorate Ming. I think he deserves it.

Writing my new Christmas novella - What Happens at Christmas - was a bit of a surprise. It was never on the radar, until it was! I've gone into the details of how that happened in a post on the Being Anne blog, which was part of last week's launch week book blast.  There's a link at the bottom of this post, if you haven't read it yet.

Bringing Devlin back was a bit of a surprise too. After publication of Never Coming Home lots of people asked if I would be making him the star of a series - he got compared to Lee Child's Jack Reacher - a lot - which really surprised me. But I never expected him to have a role like that. He has his Happy Ever After with Kaz, and that's the story, for me.

Except when I was writing What Happens At Christmas, I knew that Drew was going to need some help. He's an action man, but he doesn't have the skills - or the connections - to get himself out of the mess I've dropped him in, on his own. I'd already given him a flat in London - I can't remember if it was already in Chelsea. It may have been, as it's an area I used to live and know reasonably well.

When I realised about the needing help thing, and exactly who was going to be perfect for the role, it didn't take much to make them neighbours in Chelsea, then friends.  And of course Devlin was exactly the person Drew would be able to reach out to, when he needed that sort of skill set.

It was actually great fun to bring Devlin back, in a cameo role, and to get a glimpse into his family life. In fact, I enjoyed it so much I have half an idea for another story with Devlin and Drew. It would have to have another hero too - and a new heroine and a new love story ...

Can I cope with that?

That really would be another story

The best way to celebrate the launch of a book is with friends. Yesterday I was at the Marcher Chapter of the Romantic Novelists Association and we had cake. Roulade, to be exact. Meringue, cream, almonds, fresh strawberries ...

What Happens at Christmas - launch day.

It's been a long wait, but it's out today. Do you have your copy yet? 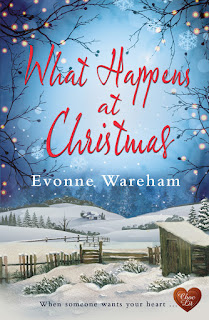 
Posted by Evonne Wareham at 06:30 No comments: