Never Coming Home takes the reader to a wide variety of locations as Kaz Elmore and Devlin embark on their search for truth.

This 'tour' is my chance to share photos of some of those locations, and the stories behind them, with readers of the book.  It's an armchair tour - no passport, visas or transport required. If you've already read the book, then I hope it will take you back to some favourite moments. If you haven't, and are about to read it, then I hope it will enhance your enjoyment as you read.

The book opens in the United States, on a road somewhere between Atlanta, Georgia (where Devlin has just sorted out a major disaster for a client of his security firm) and his business HQ in Chicago. That is a lot of road! I don't have pictures, because the site of the car crash that starts the action is a location I invented, somewhere on that very long road. 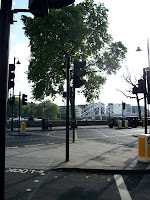 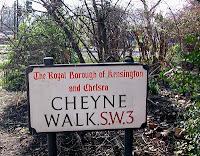 The prologue switches quickly to London, to Kaz Elmore's home, in a mews cottage off Cheney Walk, where Kaz receives heart-breaking news. It's here that Devlin tracks her down, six months later, when he comes to London on a business trip. Cheyne Walk is a posh part of London, overlooking the river Thames, in Chelsea. When I worked in London I lived in Chelsea for three years - in a very small studio flat, well away from the Thames - but this was one of my favourite places to walk on a Sunday afternoon. The area between the King's Road and the river has always had rather a rakish reputation, being the home of writers and artists like Oscar Wilde, Bram Stoker and Dante Gabriel Rossetti, and more recently, Mick Jagger and Keith Richard, of the Rolling Stones. When I was looking for a place for Kaz to live, it seemed the obvious choice. Whether it is a bit of wish fulfilment on my part I don't know. That's one of the things about being a writer, you can give yourself anything you want, in your imagination, through your characters. 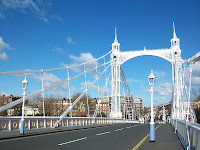 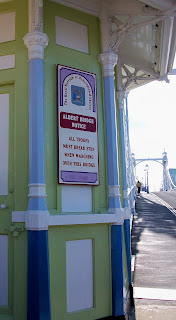 I created a small mews (which is where the horses would have been stabled when they were the only means of transport) just off Cheyne Walk, for Kaz's house, so she does not have a direct view of the river. The house belongs to Kaz's mother, Susanne, who bought it a long while back, when she was a top model and appearing in all the fashion magazines.

Another feature of this part of the Thames embankment is the Albert Bridge. It's recently been renovated and is very pretty. It has a starring role in Never Coming Home, featuring in a number of chapters. Kaz goes there when she needs to think, or work out a problem. She used to take her daughter Jamie there, in her pram, when she was a baby. Then later, when Jamie was older, they would go to look at the boats. It has a more poignant role too, which is revealed later in the book, but I won't risk spoilers by being more specific. 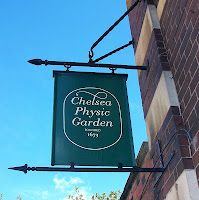 While we are in the area, the last place that should be mentioned is the Chelsea Physic Garden. My editor wanted an exact location for Kaz's  landscape gardening business. When I lived in Chelsea I belonged to the garden society which met in the Chelsea Physic Garden, so that immediately came to mind as the best location for a yard and greenhouses, plus the large shed that serves Kaz as an office. I slotted them in beside the Physic Garden, alongside their sheds and green houses. I don't think they will have noticed.

This is not the public entrance, which is on Swan Walk, but is the door used when I attended events organised by the garden society. Slipping in by the back way, after hours, always gave it a 'secret garden' sort of feel, but maybe that is just my novelist's imagination working overtime. 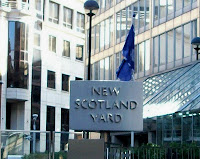 Where shall I go next?

When Kaz hires Devlin to help find the truth about what happened to her daughter, the trail leads them to Florence, so we'll be going there in a moment, but to complete the central London locations for the book, I have to include Scotland Yard, where Kaz's uncle Phil  is a detective inspector. I have been inside Scotland Yard - for a meeting, I hasten to add. It was quite a long time ago, but my impression, which I have used in the book, was that it was basically an ordinary office block, which could have been situated anywhere in London. The police get through a lot of paperwork, like any large organisation, so that is probably not too unexpected, when you think about it. I hope I haven't shattered anyone's illusions - maybe there were more exciting parts that I didn't get to see? I gather the Black Museum is interesting, if you can wangle an invitation.

A short, crucial scene calls Phil out of the office to meet an informer in St James's Park. I circled the block and walked up and down for quite a while, figuring out the route he might take and the timing. I was expecting to be asked what I was doing, but I must have looked harmless, because no one asked me to explain, even when I was taking photos.
'Well, you see officer, I'm a romantic novelist ...'

I decided that Phil's route would be via Queen Anne's Gate, and spent a long time wandering the perimeter of the park, deciding which bench he would chose to wait for his meeting. I spent a considerable time too, taking photos of my selected bench for this tour, in order to get one with the perfect  view. I have maybe a dozen pictures, and one is exactly the shot I wanted. Then I found out about the Royal Parks rules on use of photography and decided that I could not use it after all. The bench is close to the road and the fountain, If you're ever in that vicinity, maybe you can find it for yourself. Phil goes there to meet a potential informer, who may be able to help him crack a difficult case he's working on. I won't say any more, but if you've read the book you'll know what happens next. I wanted a place that had some bushes close by, and was also close to the walkway, for a fast exit. 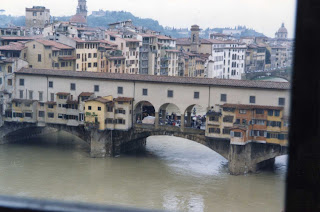 While Phil is taking a meeting in the Park, Kaz and Devlin are in Florence. One of my absolute favourite cities. When I was thinking about places that Kaz's ex-husband might decide to live, I could not resist using it. As Jeff is a would-be artist, and Florence has so many beautiful things, not just in museums but in the churches, on the street and in the squares, I thought it would be appropriate. These photos were taken a few years ago, in May, when the weather was not very kind. We even had a few flurries of snow! I've adjusted the weather when Kaz and Devlin get there, so it is sunny and warm. They make two trips to the city. During the first there is a tiny, romantic interlude when they walk across the Ponte Vechio at night. Here it is, in daylight, under a cloudy sky, with a muddy looking river Arno running beneath it.  If my memory is accurate, I took the picture from the Uffizzi Gallery, which is why there appears to be part of a window frame around it. 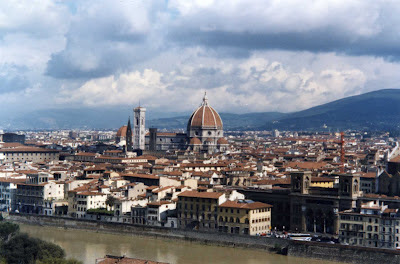 When Kaz and Devlin return to Florence, later in the book, they visit the Piazzale Michelangelo, where Devlin has an assignation with a colleague. This is the view over the city which Kaz admires. Imagine it with blazing sun, not stormy clouds.

There are a number of other significant locations in the book, although I only have one more picture. Devlin and his partner Bobby fly to Dublin on business, and Bobby ends up alone in Uxbridge, which is a part of London I know quite well, as I lived there for many years.
I spent a wet morning after a Romantic Novelists' Association summer party exploring buildings around Hayes station, in Middlesex, for an important confrontation scene. Most of the general geography in that scene is accurate, including the steps, and there are some derelict buildings close to the rail line, but I altered and rearranged them to suit what I needed in the story.

I like to set at least one scene in my books in my native Wales. In Never Coming Home, it is a short one, but important to the plot, and takes place around the Central railway station, where Kaz and Devlin arrive by train. I have to admit to inventing an office block next to the station. This was the fastest building project ever to happen in Cardiff - that office block went up in a flash, between one page and the next.

I've visited the remaining European locations - the South of France and Lake Garda, in Italy, but this was in the days pre digital camera, so I don't have any usable photos. For the last scenes we return to Albert Bridge again, and then to Chicago. I've never been to Chicago, so that part is imagined also.

So, that's it - a whistle stop location tour of Never Coming Home. I hope it's given you an idea of the places that appear in the book and the thought processes of  authors, who ruthlessly create and destroy whole buildings, to suit their own convenience.

Now that is power. It's imagination.