On being a 'treat'

Last week I was the Choc-lit Friday Treat. I’ve never been a treat before – it sounds slightly wicked.

For those who have not signed up to Choc-lit’s mailing lists, a treat is a short story – a piece of flash fiction, really, from a Choc-lit author – often someone who has a new book out. It usually arrives in time to be read with morning coffee/tea, which is very civilised.

If you’re signed on to Choc-lit’s mailing list, and to receive the treats, you know about this. If you aren’t signed on, why not? It’s free, and it means you get those little treats arriving in your in box on a Friday – not every Friday – and a monthly newsletter with info about new books, events, the occasional chance to win stuff. If you hop over to the Choc-lit site you can sign up. But don’t go yet. I’ll give you a link at the end.

Anyway back to my treat. As regular readers know, I’m not much for short fiction. I always blame it on the plotting requirements of romantic suspense, which need more room than 500ish words, which is true, but it’s also that I don’t have a big facility for writing short. It’s not my thing. Except sometimes it is. I occasionally get an idea, and then I enjoy putting it down in a short format. Which is what happened with this one. I wrote it when I was editing Summer in San Remo (a process that took on the proportions of painting the Forth bridge, it had so many stops, starts and beginnings again) which meant that I had it all ready when the book was finally released – which earned lots of brownie points with the lovely Lusana in the Choc-lit HQ (at least, I hope it did) and not a little astonishment.

It’s a very romantic piece, set in Paris, and I particularly tailored it to include echoes of Cassie and Jake’s story in Summer in San Remo, although it’s not about them. That was quite satisfying to do, a little test of skill, like trying to complete a crossword – I’m not all that good at those, either – I won’t talk about what those were, because it would be spoilers, but if you’ve read both you will probably have picked them up, and if you’ve only read the treat, that’s a little added extra when you come to read Summer in San Remo. I hope you will read it. I think you’ll enjoy it.

To sign on for the treats, you need to email info@choc-lit.com with Treat in the subject heading. If you ask nicely they might even be able to send you mine, if you haven't already read it.

The link to the CHOC-LIT site is HERE 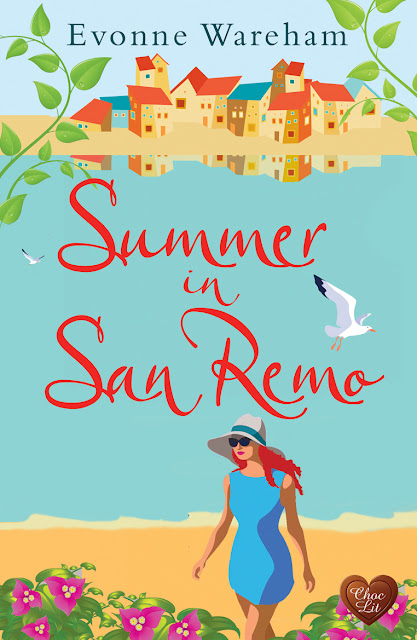 Tarrah! Here it is - the cover of my new e-book from Choclit

That's because the book is different. Not the kind of thing I usually write, it's a chase around the Riviera involving confidence tricksters, mysterious strangers, cocktail parties, film crews,  picnics, shopping for shoes  ... A summer fling, if you, will.

Crime, but with a much lighter touch.

Not a dead body in sight.

The chance for some fun, in time for the holidays.

Available NOW from all e-book platforms.

CHECK IT OUT WITH THIS LINK - HERE

On sale on all e-book platforms and of course, the COVER REVEAL.

It's a secret, but I think this guy may know something. 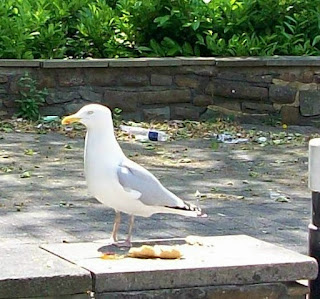 Posted by Evonne Wareham at 12:42 No comments:

It all happens on Tuesday 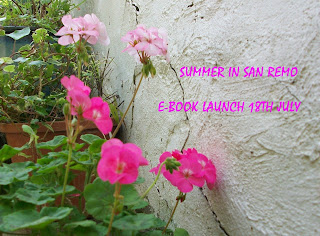 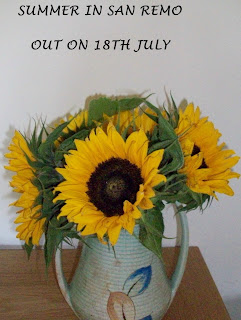 Posted by Evonne Wareham at 06:30 No comments:

Research (and romance) can happen anywhere

I ran away to London again for the weekend. It will be the last for a while as my bank balance is screaming at me to step away from those nice hotels with the delicious breakfasts - one of my biggest weaknesses.  This trip was special as it was a reunion for people I knew when I worked in Eaton Square. It was lovely to catch up and see old friends from what was probably the best job of my career (Not counting being a writer, of course.)

As well as the reunion and a trip to see Andrew Scott's Hamlet at the theatre, I also managed a salon at Carlyle's House, in Chelsea, and a trip to the Hampton Court  Flower show. And took pictures.

The evening at Carlyle's House was lovely - a chance to have a brief look at the house, in all it's Victorian  splendor, and drinks in the garden - which had an apricot tree (shades of the Duchess of Malfi) The house would have hosted the likes of Chopin and Dickens in Carlyle's day. We weren't quite so august, but it was a good evening. The talk from Sarah Wise was on the Old Nichol, a notorious Victorian slum in Shoreditch - she had pictures and statistics that prove that you can't always believe the rumours and reputations that are handed down - appealing to me as an historian and a writer.  I prowled the area before the talk too, as it's the part of Chelsea that I chose for Kaz to live in Never Coming Home, and my hero in the novella I'm working on has a flat there. I was able to pick out the sort of place he would have, so that was useful. See - research everywhere.

Then the next day down to Hampton Court, and the flower show. And there was plenty there to attract a romance writer - from the rose of the year, to the vegetable plots, to the food tent with cakes and cocktails. I have a romantic suspense series on the distant horizon that is set in an invented village on the Welsh coast, and I am always on the look out for arts and crafts which might go on there among the normal inhabitants, not the ones who do dark deeds for a living. I collected some good ideas. And, of course, a cake covered in edible petals would be just the thing if there happened to be a wedding ...

And now for something completely different ...


This is an exciting time for me - my first new book from Choc-lit in ages.

It's arriving on 18th July - Summer in San Remo - just in time for the holidays! One of Choc-lit's secret releases - no pre orders - and no-one sees the cover until it's ready to roll. But I have to tell you, the cover is gorgeous!!!!

It's a little different from what I normally write. Actually, make that a lot different. It's crime, but not as I usually write it. This one isn't gruesome, or scary. No dead bodies. At all. No one falling from high buildings.


There is someone falling in the swimming pool ...

Cassie and Jake have history - romantic history. And all the baggage that entails. And that's without some disappearing money and a mysterious stranger. On the Riviera.

You get the picture.

This is me, letting my hair down and having a little fun. Just for the summer. I hope readers will enjoy the story as much as I enjoyed writing it.

But don't worry - the WIP in progress is back to the dark stuff.