On tour this week.

This week I am on a blog tour with the lovely Brook Cottage Books to highlight Summer in San Remo as 'the perfect summer read', in time for those of us lucky enough to be having an early holiday over Easter. And if you are looking for a sunshine read and prefer to read in paper rather than by electronics, then the book will be out in paperback in July.


The tour dates are -

I hope you will join me on some (or all) of them. There will be reviews and I've done a couple of very interesting Q&As with some fascinating questions. Not so sure the answers are fascinating, but I've done my best 😃

The next book - maybe

I've spent the last few days disentangling part of the first draft of what I hope will be the next Riviera Rogues book - I say hope, because I'm also at the cold feet stage wondering if the Choc-lit tasting panel will like it (All right, what I'm actually saying is 'Do you really think you are going to get away with this one?' Really?)

It's got quite a complex plot (By complex, do I really mean complicated? Really?) It's an Ocean's Eleven type scenario with a group of friends getting together to take down a con artist. When you see those plots in films, the bit where they are organising the sting is usually a montage of members of the gang doing mysterious stuff, all of which becomes clear at the end. In a book people have to sit down and talk about it. (Is this bit boring? Really?) I do think I've ironed out the parts where disbelief wasn't so much suspended as dangled head first over a bottomless chasm, so that's a plus. I also seem to have a mystery involving my hero's parents which I don't remember writing (the joys of anaesthesia) and am pretty sure I have not resolved. It will be interesting to see if I did.  I'm not sure that the villain isn't too nasty for a light romantic comedy - but everyone likes to hiss a villain, don't they. (Do they? Really?)

On the plus side I got to spend more time with Cassie and Jake from Summer in San Remo. Considering that they both come out of my head, the chemistry between them is very confusing - I love writing them, and once they are talking, I have  a problem shutting them up. The new hero and heroine, Nadine and Ryan are different - more reserved. Ryan is more insecure that my usual male leads, but he has a very strong protective streak - a knight in shining armour, and quite cute with it. Nadine is a few years older than he is, a very successful business woman and a widow, so she has to convince him that she doesn't always need him to protect her and can stand on her own feet, although a shoulder to lean on is also very welcome on occasion. I think he's getting the message. Slowly.

It's set in Bath and then on the Riviera, naturally - the area around Nice. There's a old farm house in the hills where Nadine and Ryan get to spend some time and a gorgeous villa where the wedding is arranged to take place. Did I mention that the whole thing revolves around a wedding? At the moment it's called A Wedding on the Riviera, but that will probably change.

That's if it make it past the selection panel.  Writing about it here has made me a bit more hopeful. Fingers crossed.
Posted by Evonne Wareham at 08:30 No comments:

The thank-yous at the front of the book

Acknowledgements. Those lists, usually at the front of the book - the equivalent of an award winning actor thanking everyone from their mother to the man on the 48 bus.

Do you read them - or just skip over them to get to the good stuff?

I read them. I'm nosey. I look in other people's baskets in the supermarket to see what they've bought. And at books other people are reading, to see the title. On the Tube last week (Got let out for good behaviour and ran off the the wicked city overnight, to do romantic novelist stuff) I went as far as asking the man sitting next to me what his book was. He got out at the next stop. I hope he wasn't too far from his actual destination.

Acknowledgements can be intriguing, when the author thanks people for the information on llama farming, or shark fishing, or hot air ballooning. They can be sinister, like the thanks for information on famous poisoners. There is usually a list of people who have helped write the book, which sometimes reads like the cast of a Hollywood block buster, except books don't seem to have best boys and key grips. Sometimes the author has held a contest to name a character and you get to find out about who and what.

There are some author's acknowledgements that I particular enjoy. Harlen Coben is one, as his are often funny, which is a contrast to the thrillers that he writes. And Jane Lovering's are also likely to make you laugh.

That's why I read Acknowledgements - because they can be informative and are often amusing. And, speaking as someone who has written them for her own books, they are a genuine expression of appreciation to all those people who have helped with the book. It's nice to get the chance to say thank you.

I've written acknowledgements and I read them, but I never expected to be in one. But if you read Georgia Hill's Millie Vanilla's Cupcake Cafe books, which have just been amalgamated and released in one volume, you'll find my name, along with fellow author Wendy Lou Jones, credited for helping with the inspiration for the books. The three romantic stories are all together now, full of fun, but also with a share of heart break and, of course, with lots of delicious cakes.

Finding my name in the acknowledgements was a lovely surprise.


Posted by Evonne Wareham at 08:30 No comments:

Don't for get I will be 'in conversation' with Jill Barry at the Barry Library on 13th February. An early celebration of Valentine's day. 2 pm and it's free. 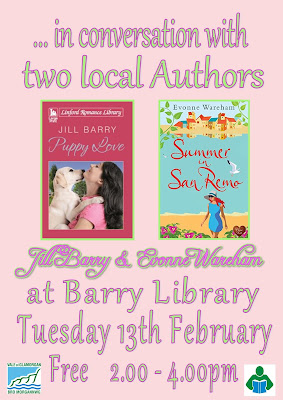 Posted by Evonne Wareham at 17:38 No comments:

I've blogged before about the strange experience of seeing your book in translation. Your name is on the front, but you have no idea what the contents is really like.

This time it's Norwegian and the book is Never Coming Home. This is what they look like.  Isn't the cover lovely. It's released by the publishers Cappelen Damm. Here's the link  LINK 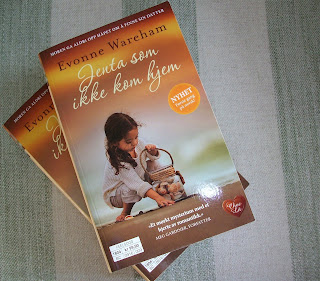 I hope my Norwegian readers enjoy it! 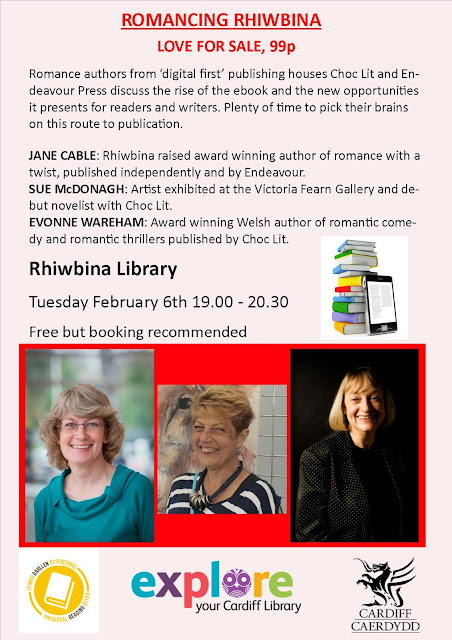 Posted by Evonne Wareham at 17:31 No comments: