Something to read on the Beach?

As you know, I'm the Choc-lit author at the dark end of the selection box. The one that writes the scary, creepy stuff. Heroines in jeopardy, tortured heroes. Lots of dead bodies.

Don't get too attached to anyone, they might not make it to the end of the book.

Except that the next book that's coming out with my name on isn't like that.

It's crime, but not the way I usually write it.

This one has sunshine and parties and cocktails and pretty clothes and picnics - and two ex lovers sleuthing on the Italian Riviera. And maybe falling for each other all over again?

I’m really excited, as I haven’t had a new book out in ages. Life, and all that stuff, getting in the way. It's called Summer in San Remo, and I'm hoping that it will be the start of a light-hearted series called Riviera Rogues. I don't have a cover to reveal yet, (Although I’ve seen the art work, and it’s gorgeous) but it should be out as an e-book next month. And then I’ll be able to say that I write in the sunshine and in the shadows.

But the next one is all sunshine.

Something different, just for the summer.

Posted by Evonne Wareham at 07:00 No comments:

Alibi in the Archive Part Two

Saturday at Alibi in the Archive was a packed day. Starting with a fresh look at Sherlock Holmes from the inimitable David Stuart Davies, who had played a very convincing murderer in Ann Cleve's murder mystery the evening before, we next whizzed through  the publishing history of Agatha Christie's monumentally successful books - beginning with a three book contract in 1924, from David Brawn, who now looks after the Christie legacy. 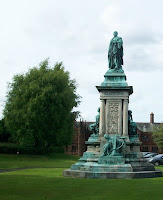 I was particularly interested in Martin Edwards' talk on the Detection Club, which began in 1930 as an invitation only dining club for crime authors which is still going strong now, and the Crime Writers' Association, the professional body for crime novelists, begun in 1953 by John Creasey. The weekend was to celebrate the Gladstone Library acquiring the archives of both bodies. If you are interested in the luminaries and forgotten names who were once best sellers in the Golden Age of Crime, I recommend Martin's award winning book, The Golden Age of Murder, the product of years of passionate research, and it shows.

After lunch those with strong stomachs enjoyed Linda Stratmann's look at poisoners, particularly those of the Victorian era, Linda is disturbingly expert on arsenic and other delights! I've blogged before on the crime classics that the British Library is publishing - particularly the wonderful covers, based on vintage travel posters. A talk from Rob Davies from the British Library, provided the background on how the series came about, with a glimpse of what may be to come. After tea we had a look at clerical crime, with Kate Charles - priests, nuns, monks, ministers and rabbis, historical and contemporary, who all combine their calling with a little sleuthing on the side. It fell to Kate Ellis to round off the day with a look at the way past and present supply ideas for novels. Kate was also responsible for the after dinner murder mystery, which was great fun, with the actors getting into the spirit in costume and the whole thing revolving around the discovery of a corpse in a trench at an archaeological dig. I couldn't make up my mind which of two candidates was the culprit - of course I opted for the wrong one!

Sunday morning brought a illuminating and entertaining talk from Stella Duffy, who has taken on the job of finishing a partially completed Ngaio Marsh story - three chapters and some notes, set in New Zealand at the end of World War Two and taking place over the course of a single night. And that night being the midsummer solstice!!! I can't wait to see how she manages it. Her descriptions of researching places in New Zealand that are connected to Marsh, and the locations she may use was fascinating.

Two last sessions looked to the future - for the Crime Classics series and a past and present round up, with all the speakers.

As I've said, it was a really brilliant weekend. So brilliant, in fact, that they are now hoping to repeat it next year.

And if that gallop though the proceeding has whetted your appetite, I have a little surprise. The Library records it's talks, and a number from the weekend are already up on their 'cloud'. If you want to hear more from Martin, Linda, Ann and some of the other speakers, and they were all fabulous, then try this link HERE

You'll need to scroll to find the ones you want. Happy listening.

Email ThisBlogThis!Share to TwitterShare to FacebookShare to Pinterest
Labels: The Crime Writers' Association. Alibi in the Archives, The Detection Club

The Gladstone Library and Alibi in the Archives.

I just had a fabulous weekend at the Gladstone Library in Hawarden, North Wales, for what now appears to be the inaugural Alibi In the Archives, weekend - but more of that later.

First, the library - a library with rooms which has been on my radar for some while - highly recommended by other writers if you have a book to begin, finish or sort out in the saggy middle, I had a booking for a few days there in late 2014 but had to cancel when life got in the way, so this was my first visit and the chance to check it out. I wasn't actually staying in the guest rooms - they'd filled up before I organised my ticket - so I stayed in a nearby hotel with a day ticket for all the events and food. I have to say the food, surroundings, and general ambiance did not disappoint, and I now have to put a return visit on the bucket list. Whether that will be for a book or the day job  - we'll have to see.

The purpose of the weekend was to mark the  Library giving a home to the archives of the Crime Writers' Association and The Detection Club - a select, invitation only dining club that was begun between the wars and boasted some of the huge names in Golden Age crime fiction. It's still going strong and some of the crime names who are now members are not exactly dusty, either!

The programme focused on Golden Age crime, partly inspired, I think, by the crime classics currently being re-released by the British Library. I've blogged about them before. If you like classic crime and want to explore some authors who were very successful but have now slipped into obscurity, check them out.

The weekend started with some gentle after dinner sleuthing, when participants had the chance to pit their wits against Ann Cleeves, in a particularly devious crime scenario, a murder in a garden next to a large conservatory, enacted by some brave members of the audience and complete with a forensic report. I say it was devious, because I had no idea whodunit. I know who would have if I'd been writing it, but I didn't have a clue on the night. It was a lot of fun and a really good start to the weekend.

Ann was also one of the guest speakers the next day, giving some insights into having both her Vera and Sheltand novels turned in to TV series and talking about the circumstances that led her to chose the all important settings and how the characters developed.

It was a packed weekend and I want to do it justice, so I'm going to stop there. Part 2 next week!

Link to the British Library Shop and the crime classics catalogue. HERE
Posted by Evonne Wareham at 15:13 2 comments:

Email ThisBlogThis!Share to TwitterShare to FacebookShare to Pinterest
Labels: The Crime Writers' Association. Alibi in the Archives, The Gladstone library

Just a walk by the sea

Sometimes you just need some space. On Sunday, after an overcast day, the evening cleared.

I went for a walk and took some pictures. You can't smell the elder flowers blooming in the hedges, or hear the sound of the waves, but the sea and the sky are still blue.

Just a walk by the sea.