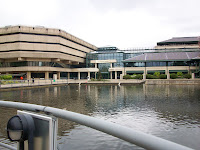 I have an anniversary of sorts on 28th February, which is Sunday. On that date last year  (a Friday) I spent the day in London, at the National Archive, doing a final reference check for the PhD. It was a good day, I enjoyed myself, found all the files I needed, looked around the With Love exhibition - love letters from the archives. (It's now on line and highly recommended, poignant and beautifully presented.) I travelled home on a packed train. It seems like a lifetime ago. Reports of a new virus were beginning to sound disturbing. Roll on a couple of weeks and my planned next trip to London to see a friend, once I was free of academia, had to be cancelled. And that was that.

Who could have imagined?

One year later and the idea of travelling on a train or a bus gives me shivers. I'm out of practice. Going to the supermarket is scary enough. Like everyone, I'm waiting for the escape route of a vaccination, but even then I think it's going to be quite a while before I'm comfortable in crowded places or transport. I miss libraries, archives, exhibitions, cinema, theatres but I'll need to be very sure of myself before I venture into normality again. The social skills have gone up in smoke.

Lockdown does have a few compensations, Zoom being one of them. Regular on-line meetings with writer friends means that get togethers can encompass attendees from all over the country or even the globe. I'm also enjoying a lot of on-line lectures and courses that either would not have been offered that way, or I would not have thought about joining. I have one on painting coming up in March, but at the moment I'm working through sessions from the International Thriller Writers, based in the USA. It gave me a small buzz, when passing the book display in Asda, to see books from Karin Slaughter and David Baldacci, with whom I had a masterclass on Monday.  Okay - it was a recorded panel session and they didn't know I existed, let alone that I was there, but it was very good and I got that little buzz. Reflected glory. I have been to that conference in New York and hope one day to go again, when I will get the chance to be in the room with those big names. You take what you can get when you're confined to the house. Sadly you can't currently buy the books in the supermarket, as they are classed as non-essential items.

Other than the scary supermarket and the occasional  delivery, the big excitement of the week is sorting the re-cycling!

I'm really hoping that the next anniversary on 28 February 2022 will be very different, for all of us.

What make a series?

I'm currently contemplating a possible new series. Yes, I know I have more to do on the Riviera first. I did say contemplating. It's legal, doesn't cost anything and it's fun. The messy part starts when you begin writing the stuff.

It's made me think about what constitutes a series. Obviously the books need to have something in common. On TV a series/serial can be installments of one story line, or possibly several, over a period of time. Or a group of characters appearing in each episode with a different story for each installment. The first would cover any of the soaps, the second detective dramas - same sleuth, different mystery. I think the first one might be a little more difficult to sustain in books in it's pure form, as the story would never complete, but lots of authors develop a plot line over a trilogy to good effect. The second option of course applies to numerous successful crime series in books or on the tele.

I've been thinking about other possibilities too. There might be a shared location - a village perhaps, with stories for different inhabitants. Lots of rom-coms are based on that sort of set up and the location becomes part of the attraction, and feels very real, like coming home to a familiar place.

The model I've been using for my Riviera Rogues is using broadly the same location - various places on the Italian and French Riviera - with a loose connection thorough the detective agency and a new couple each time. The idea that I'm mulling over, like many romantic suspense novels, would be based around an organisation. Crime fighting - good guys but not official. I'm not planning on researching police or any of the alphabet soup agencies. If I invent it, I can do as I like with it. My game, my rules - or probably theirs, once the characters start getting up off the page and giving me grief. I'm thinking interlocking partnerships and again a new couple for each book, and the chance of a glimpse at characters who have had, or will have their own stories.

I've done that a bit with the Rivera books - it's fun when you get an idea for including characters from other books in the current story. That's tended to be spontaneous; when I needed a Hollywood star it was natural that it would be Dan Howe from What Happens at Christmas.

This would be more organised and planned in the new idea. (Until the characters start doing their thing - see above) . So nice to have a plan - or think you have.

So- as I said, I'm contemplating. At the moment that's taking the form of wondering how all the different ideas I have, some of which are partially written, can be brought together. That's the fun bit.

When I was in school He Who Would Valiant Be - with it's refrain of 'to be a pilgrim' was a favourite hymn. I guess that it may not be sung quite so much now in school assemblies, if they still have those. John Buchan's Pilgrim's Progress might not be a set text these days either. I'm sure I read it, but I don't remember it. My school days were a long time ago.

The word came to my mind when I was writing the post about travelling last month, and I mentioned a pilgrimage I want to make to Scotland. A pilgrimage is defined in the dictionary as journey to a sacred place, and even in our secular society, there are many that still happen for that purpose, across many religions. A looser definition  that I have also seen used would be be a journey with a purpose, and my proposed trip to Scotland would encompass that.

It is a very sentimental journey. One I promised I would make several years ago, although personal circumstances and pandemics have intervened. The place I want to go is to to the Isle of Orkney, most specifically to Scapa Flow, where the World War Two wreck of the warship HMS Royal Oak still lies. The ship was sunk by a U Boat in the second month of the war. I want to visit, as my mother's cousin, my cousin, once removed, was one of the sailors who went down with the ship. Ruben was just 20 years old, an only child, just out of training, who had a long standing ambition to join the navy. apparently it was all he ever wanted to do. His parents were naturally devastated, as were so many others who lost sons, fathers, brothers in a global conflict.

With a writers imagination, which can sometimes be a burden as well as a blessing, I've often thought that his parents probably only had a sketchy notion of where their son died, and as far as I know they were never able to visit what would be his grave. I decided then that I wanted to go, for them. Very sentimental. It's my little pilgrimage, and I hope that I eventually get to do it. Maybe next year?

As regular readers will know, I'm incorrigibly nosey. I always say it comes of being a writer, but I suspect it's just a character flaw. I'm also a collector of unconsidered trifles - the magpie complex. You never know what that snippet heard on the radio or read in the paper might be useful. This time I heard a piece on the radio about changes in shopping habits since we've been  getting most of our retail fix on-line. Predictably fewer party dresses and more stuff for lounging in. I also read that one popular shoe designer is not doing shoes with heels for next season as we are all wearing flats and trainers. This is good for me, as I can't seem to manage heels these days.

I don't think that any of this is going to be of any use for a book, although I must admit that I do like to send my heroines shopping on occasions. They also sometimes wear my clothes. Someone has to, if I'm not going anywhere to get some use from them!

This got me thinking about my own shopping since lockdown, aside from food and other necessities. At first I was buying clothes for the much anticipated holiday on the Riviera that was supposed to be happening in May, and then in October - and then - well maybe this year, but not until I get my jabs, so that's not for a while. I now have a capsule wardrobe of two trouser suits, a dress, two jackets and a linen shirt all ready to go. Please don't ask if they still fit. I don't dare check. My other big expenditure is chocolate.

Once I'd figured out that no, I was not going anywhere significant any time soon, and that Zoom only required a reasonably tidy top half, I stopped with the clothes  - except for the Christmas jumper, which was the result of bullying on the part of some of those Zoom attendees, who like to call themselves my friends. You can call it peer pressure if you like, but the result was that I caved and now have a red sweater  with glitter and reindeer.

So - what took the place of additions to my wardrobe? Fairly predictably, books - the e-kind and and those supplied by post by my nearest lovely indie bookshop Griffin Books in Penarth.  A number of those were travel books - research for novels to come, I hope. I've also signed up for a number of online courses including some modules from the International  Thriller Writers' MBA programme all the way from New York and featuring some big names in crime writing, so I'm really looking forward to those. New adventures. My last indulgence, surprisingly, was jewelry. I have a decided weakness that way, and Facebook seems to have noticed and keeps showing me adverts for lovely stuff. I've been good and not bought anything in the last two months - had to pay the tax accountant and the gas people for the boiler insurance, and all those subscriptions to writing organisations that come due in January. Will I hold out for long now that the bills are done for the moment? I shall try.

Now comes the nosey part. I'd really love to hear about other people's indulgences while in lockdown. Is anyone brave enough to confess their shopping secrets in the comments? I promise I won't tell.