When the leaves are turning ... 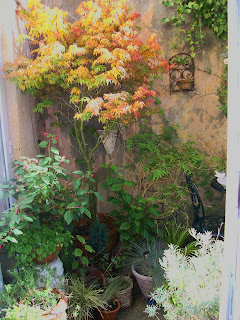 Autumn is my least favourite season, especially after the clocks have changed. I don't do well when it is cold, but it's a lot to do with daylight as well. I don't like winter either, but at least after the solstice the nights begin to get lighter and you know that something better is on the way, whereas in autumn it's just a lot of cold and dark to look forward to.

Which makes it surprising that I have a few ideas for books bothering me at the moment that want to set themselves at this time of the year. I think it is because they have a spooky, supernatural element, and this time of the year lends itself. Halloween and all that. I'm thinking - or they are - books in waiting can get quite stroppy on occasion - more in the way of folklore and old stories and some hedge witchery,  rather than ghouls and ghosts and people flitting about on broomsticks. It's all been helped along by a lecture at the university last week about the time around Halloween - Martinmass and St Martin's day, which is on the 11th November. Apparently it was a time of celebration of the harvest with feasts and fairs stretching over up to eight days - St Martin's Fairs and Mop Fairs and Goose Fairs and Hiring Fairs are all connected, and there's Guy Fawkes in the mix too. The idea of a time of potential misrule has possibilities.

Guy Fawkes night has rather been overtaken by Halloween in the last few years, with the emphasis now on 5th November on large, organised, and safer public displays of fireworks. Communal bonfires, with wood collecting going on for weeks before the event, fireworks in the back garden and making a guy and collecting pennies on the street corner all seem to be fading away - quaint and old fashioned. And 11th November is, of course, marked with poppies as Remembrance or Armistice Day, rather than a saint's feast day. 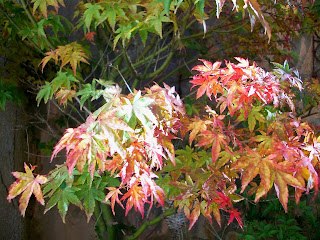 But the idea of a fair or celebration over a few days in autumn, with an other worldly element to it? Well, as I've said, there are ideas brewing. Will they win, over my preference for sunshine?

We'll all just have to wait and see. 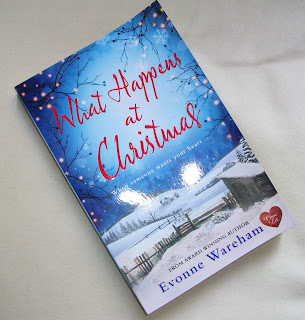 In general, characters arrive out of nowhere too. There is quite a big and varied cast in the forthcoming Christmas paperback - What Happens at Christmas - including a very precocious four year old, a handful of movie stars, some people from the publishing industry and a ginger and white cat, who was inspired by Ming, a family legend who died before I was born.

I have indulged myself a little with the hero and heroine, I have to admit, as they are both writers and I have given them all the things a writer dreams of ... Drew is mega successful, the type that causes queues around the block when he does signings and his books are made into films and he gets asked to do TV programmes and stuff - although that actually gets him into a lot of trouble ... He does a lot of extreme research too - he writes fantasy adventure, and that is not me at all. Lori is a would-be author when the book starts and then ... but that would be a spoiler, so I won't say any more.

And the other notable thing about the book is that Devlin, the hero of Never Coming Home, makes a guest appearance. That wasn't planned at all, but when the point came when Drew had really got himself in a mess and needed help - well, who else was I going to call?

It's not your usual Christmas book - not with the hero managing to get himself kidnapped and then not knowing who, or why ...  There are villains, and they get their come-uppance, so that is probably un- Christmassy too, although, to be fair, that does not happen at Christmas. But is does have snow, in the Brecon Beacons, because every Christmas book has to have snow, right? I had to do something traditional and the snow was very handy, as it kept Lori and Drew together over the holiday itself, chaperoned, of course, by the four year old and the cat.

I better stop, before I give too much away. If you decide to buy the paperback (It's on pre-order now, for 1st December) I hope you enjoy it.

Glad to be back with romantic suspense

It was a big day last week - the paperback copies of What Happens at Christmas arrived - my second paperback release this year and in the shops in a few weeks time.

Nothing beats holding a book in your hand. It's still a bit unreal, to think 'I wrote this.' It's good to be back with romantic suspense too, as it's a genre I love to write, but that book got written sort of by accident. It arose out of a conversation with friends over how we would go about kidnapping someone - yes, writers do have that sort of conversation - and another discussion about how you would combine romantic suspense, which is not exactly warm and fuzzy, with the feel good things that are expected in a Christmas story.

Of course, once the ideas had been planted ...

What Happens at Christmas was the result. NOT your usual Christmas book. Kidnapping, secrets, attempted murder - all the usual stuff, with a freak snow storm in the Brecon Beacons thrown in, for good measure. Well it's Christmas - I had to have snow. And it was very useful to keep the hero and heroine cosy together on the big day itself. They have a chaperone, though, in the form of a very precocious four year old. And there's a cat.

Unlike some writers, I don't write with a theme in mind, but sometimes the book turns out to have one anyway, after it's been written. In this case, I think it might be being in the wrong place at the wrong time. Things happen and lives connect because people are not where they were expecting to be.  And it's not entirely a Christmas book - the first scene takes place in spring, and hero Drew is not exactly having a good time, (I've always wanted to write one of those fights on a train roof scenes). That's nothing to what I throw at him later though, and the action of the book then covers just over  twelve months, starting in November - so it actually has two Christmases. It was fun, and a challenge to write, and it has got some good reviews, so it looks as if at least some people think I managed to pull it off!

I have a lot of ideas lined up for future romantic suspense novels. At the moment none of them are set at Christmas, but you never know, I might decide I want to do it again.

All writers have their quirks - an attachment to nice stationery seems to be fairly universal, and an awful lot plot by post it note.  With me, it's time lines. No, time lines, not time lords. Yes I know there is a new Dr Who on the block, but please try not to let your attention wander.

Time lines - in case you are not keeping up - are exactly what it says on the tin - lines with times - or rather dates, on them. I love them, which is surprising, as I have a terrible memory for dates. I do one for most books, sometimes for lots of events, if the plot is getting complicated, but always for sorting out when characters were born - I like to know where everyone fits age-wise in relation to each other. It's useful too for back story - appropriate names, favourite bands and stuff like that. The prompt for this post was a book I just read - great plot, characters, etc, but something was just a bit off. In the end I realised that the ages of the different generations of the family didn't quite mesh together - not off by much, but just enough to make me unsettled.

Which just shows how useful a time line can be. I like to draw mine diagonally across the page, which is another one of those writer's quirks.

It works for me, better than post it notes - but to each their own.

These days, with phones, texts, skype, etc, etc ... it's difficult to avoid your nearest and dearest, and the not so nearest ...

But even in the relatively recent past, things were not so easy. Then it was just the post  - letters, or maybe newspapers ...

I had the idea for this post from a post on Elizabeth Hawksley's fabulous blog which is often a mine of historical quirkiness. This one is about entries in the personal column in The Times for 1870.
Here

I can remember a time when the personal columns were a fascinating, if mysterious read (Come on, I'm not that old - alright, yes, I am ...) Spies were said to use them to communicate and as Elizabeth points out apparently lovers did too.

From my own use of contemporary newspapers from WW2 for the day job, it came as a shock when I first encountered the hospital lists - coded lists on the condition of patients in the isolation hospital for relatives who would be unable to visit because of the nature of the illness and the distance - and some of those patients might have been children with Scarlett Fever ... We take easy communication so much for granted now.

Of course it's not all progress - everyone who has ever read a Sherlock Holmes novel knows that it was possible to send an invitation to dine or make an evening appointment by post on the same day, at least in London. With three or four deliveries, why not? Now you'd send a text or an e-mail, but the idea of a letter is a lot more romantic somehow.

Lack of communication can be a blessing for a novelist - I can't count the times I have had to interfere with a piece of modern kit so hero/heroine doesn't get a vital piece of information. On one level writing before technology is very alluring. But then, if you have to summon help in an emergency and you're left looking for a working pay phone ...

It's all swings and round-abouts. I'm looking forword to writing contemporary and putting a foot in the past, when the day job is over.
Posted by Evonne Wareham at 08:00 No comments: