In the kind of books I write the hero is usually the strong, silent type - with a job that tends to fly somewhere under the radar, or even on the wrong side of the track. Not revealing too much is a given - it's taken as a virtue. Which is not a problem, except when they are not even willing to talk to me.

I'm currently kicking around ideas for a trio of connected novellas that centre around a house and a government department that isn't black ops, but might be classed as the darker end of grey. (No, not that kind of grey.)

And three books gives me three heroes - a nice place to be, you might think - and it is, once I can get them to talk to me. And they could start with a name ...

Many authors will tell you that getting the right name for a character is important. The wrong choice can make the whole book feel uncomfortable. I don't know why, it just does. Trust me on this. And which is why I have a problem - as my three guys are being particularly difficult about names - as in not being willing to tell me what they are. Mr X, from Book One - naturally, it has to be Book One - is being especially evasive. He's begun to make conversation - not with me, but with the dog - but there's no hint of a name. I've tried explaining that at the very least he could part with name, rank and serial number - even the enemy gets that - but he's not buying it. And really, I'm not the enemy. Although if he has any idea of some of the stuff I'm planning to put him through, he might not be convinced on that. But he's not going through the mill as much as the hero in Book Two who has given me a first name - Lex - but nothing else. Number Three? For him I have a last name - Kelvert. He's the buttoned-up, back-room type, so it might take a while for anyone to use his first name, so I'm OK with that at the moment. Romilly, his heroine, knows what it is, as they go way back to school days together, so she might tell me at some stage.

All this is going on in my head at present. It's a bit busy in there at the moment with three sets of characters tramping around. Actually, make that four, as there is also a full length book in the mental works too. And I'm fighting the hero on that one, as he's emphatic that his name is Charlie and I'm not sure I can work with that.

Email ThisBlogThis!Share to TwitterShare to FacebookShare to Pinterest
Labels: names

Writers collect all sorts of information, on the basis that it might be useful one day - at least, this one does. Which is how I came to be at the Glamorgan Archive a few weeks ago for a talk on Medieval seals - that's seals as in wax, not sea water. It was a fascinating afternoon. At the moment I'm not working on anything remotely historical but expert information is always worth collecting. 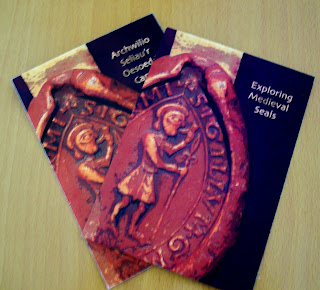 Dr Elizabeth New took us on a beginners' tour, and I think everyone was surprised how much information can be read from a tiny piece of indented wax - and they are often tiny, about the size of a shilling. The chance, after the talk, to see some of the examples held by the Archive, was a bonus. The matrix - the implement for making the impression, and usually made of metal -  is also small and carried in a pack, pocket, or on a belt loop, is therefore easy to lose. Which is why metal detection enthusiasts have rich pickings on what would have been Medieval grass verges. Dr New pointed out that these were very personal, even intimate items, reflecting the owner's identity and representing them on legal documents.

I tend to think of seals as connected with secrecy. Documents fastened with a seal, in order to preserve the contents intact and private.  (This is what writing romantic suspense does for you.)  Victorian love letters and that sort of thing. In fact the most common historical use was for validation  - documents were not considered official unless they were sealed. The fixings for the seals were also often complex and small works of art in their own right - tags and bindings that were cut out or braided. Sometimes a thumb print is still visible on the back of the wax, even after 700 or 800 years!  The impressions could be quite sophisticated - figures, religious images, plants and animals, even puns and word play on names - part of a visual culture before reading was common. Apparently experts can discover a considerable amount of information on things like shipping from the images depicted. Fascinating from something not much bigger than a thumb nail, although corporate seals for towns and cities or royalty might be bigger.

Thanks to Dr New's enthusiasm it was an absorbing afternoon. Will what I learned surface in a book one day? It's gone into the melting pot in my subconscious, so who knows? All sorts of things work their way to the surface, over the passage of time.

You can find out more about the project Dr New is currently engaged on here:

A fabulous year (and a bit!)

It's been a fabulous eighteen months for my debut novel - Never Coming Home. In that time it has picked up four awards - two with trophies that I get to keep - as well as a number of places in finals and other award nominations.
Success beyond my wildest dreams.
The latest and last trophy, a beautiful piece of marble, with my name on it, arrived this weekend.
Thank you to the Oklahoma chapter of the Romance Writers' of America for making it their romantic suspense winner in the National Readers' Choice Awards. 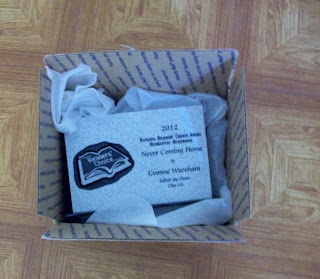 Posted by Evonne Wareham at 06:00 No comments:

A trip to Oxford

I made a flying visit to Oxford last week - and the AIEP conference of international crime writers. A fascinating two days, with delegates from all over the world and a packed programme that included a few treats - like a guided trip around the city with author Martin Edwards, who knows pretty much everything you would ever want to know about who wrote what, and where. Oxford, between the covers of a book, appears to be a hotbed of crime. I wouldn't know about any other kind! Excellent hospitality at St Hilda's College, perfect weather, good company and a great deal of enjoyment. I also snatched a morning for a short ramble round the city, before travelling home. And took pictures.

Wherever you are in Oxford, you're being watched - no, not by CCTV, but by faces and statues on doors, walls and roofs - old stone and carving everywhere. Quirky alleyways, glimpses of gardens through doorways and gateways, the doors themselves - all things that I find fascinating, with the suggestion of thing hidden, secret, maybe even forbidden.  I also chanced on a fabulous exhibition in the Bodleian Library  - small but full of treasures - medieval manuscripts and a first folio of Macbeth amongst them, illustrating aspects of fantasy and magic used by authors such as Tolkien. There were several exhibits that fitted into a long term project that is currently in research. I now know what a volvelle is, and there will definitely be one of those in the book. I briefly checked out the Ashmolean - I shall need to look at some pictures there in due course - and I took a quick look at the Randolph hotel. I was staying there for the weekend when I picked up an entry form for a writing contest - which I won! My first validation that I could write and that maybe one day I would publish a book.

I had a really good time, and the picture gallery is below.

Email ThisBlogThis!Share to TwitterShare to FacebookShare to Pinterest
Labels: Oxford

The link below is to my first ever book trailer!

Celebrating that Never Coming Home is in the Kindle sale for another few days.

I've wanted to do one of these for ages - even did a course on Movie Maker, and took a lot of pictures to use, but never got my nerve up to do it. Now, thanks to recommendations from other writer friends, I've managed 30 (free) seconds from Animoto.

So, starring Rosie and shot on location in Florence and the back garden - the big budget trailer for Never Coming Home I've crashed the text a bit in the last shot (wince) but I'll do better next time.


Never Coming Home
Posted by Evonne Wareham at 12:01 No comments: