A lot of authors write to music - and issue a playlist for the books. I'm not one of them, but the other day, standing looking at the baked beans in ASDA, Tina Turner's What's love got to do with it? came up on the tannoy and it occurred to me that it was quite apt for the scenes I am currently writing. That got me thinking that it would be fun to find a few more titles that fitted.

So - here it is the WIP playlist. Please note it is the titles of the songs rather than the lyrics that are the significant things - clues to what I hope will become Riviera Book Four!

What's Love Got To Do With It? - Tina Turner

Masquerade from the Phantom of the Opera

Shot in the Dark - AC/DC

We Are Family - Sister Sledge

Those are the clues - hope I've made you curious.

A lot to learn? 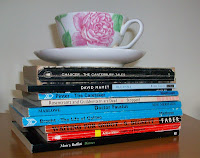 Regular readers will probably have realised by now that I am a bit off a junkie for academic stuff.  I'm not doing any more degrees - that really is too heavy - but that doesn't stop me sneaking off for the occasional quick fix. One of the few good things to come out of the pandemic is the availability of all sort of lectures and courses on line. Museums and universities in particular have transferred their offerings to the internet which means that the audience can join in for events which would be impossible in person. Large audiences with participants from all over the world are quite a regular thing.

And, of course, I'm right there. In the last few weeks I've done lectures on swords, unicorns, and the influence of alchemy and of the occult on modern art. Tonight there is a talk on duels and on Friday I'm doing something on Egypt with the Ashmolian. That last is research for the WIP. And all without leaving the house.

A lot of this stuff finds its way into books. Not quite sure if that will happen to the dueling and the unicorns, but the art often gets absorbed.  A couple of study sessions I did with the Wallace Collection on Watteau  have found their way into an unexpected part of the WIP. I hope that will add to the readers enjoyment, if and when it makes it to the outside world.

Book news. WIP is moving, slowly. I had a good day on Sunday, when words flowed like a dream - which probably means there is a dirty great plot hole in there somewhere. Not found it yet - but give it time. A Villa in Portofino bounced into a best seller flag and out again, twice. Doesn't last long but it is fun. A Wedding on the Riviera was featured in Vale Life magazine. It's all good.

Writers in their Ivory Towers?

Writing is essentially a solitary occupation. Possibly because of this writing retreats, where a group of writers, sometimes friends, sometimes strangers gathered together by particular tutors or venues, are popular  - or at least they were before the pandemic. I'm sure they will bloom again when we achieve normality. The object of the exercise is to have a block of time away from routine to get work done, the support of other writers and often freedom from domestic chores. I've often thought I'd like to do a retreat - either on my own, which is also useful for getting work done, or in a group. I never got round to it pre-pandemic - blame the doctorate - but it is on my bucket list. Of course another constraint to doing a retreat is paying for it - getaways don't come cheap, especially the very enticing ones that take  place abroad. 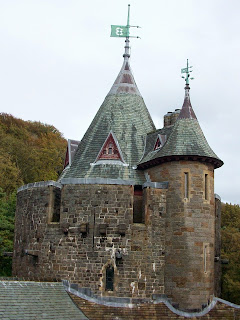 So can it be done without leaving home? The answer is - yes. The Cariad Chapter of the Romantic Novelists' Association did a virtual retreat last week. Heroically organised by Jessie we assembled on Zoom at 9am, noon and 5pm to set goals and report progress. Admittedly some were still in their pyjamas for the first session - well, alright, I admit that was me. But they were a very posh holiday pair especially worn for the occasion. Some people were only able to come to part of the day due to other commitments and if you wanted feeding and watering  it was down to you - I got myself a fancy ready meal so I didn't have to do too much.

The big thing was - it worked. It was lovely checking in with everyone to find out how they were doing. My morning was hijacked by some unavoidable admin stuff, but in the afternoon I got back into the WIP which had been languishing due to house repairs and other excitements and worked my way over a sticky bit that has opened up the way to the next section. I wasn't the only one - everyone seemed to get something out of it, even members  of the chapter who were not able to be there have said since that they did something useful on the day. Quite a number who had been a bit stuck, or circling around a project found that the time and support helped them break through.

So - it was fun, it was a success - hopefully it will result in the appearance of a number of books in due course. And of course now we all want to do it again!

(And of course the picture isn't an ivory tower - it's Castell Coch.)

How many dreams can you have come true?

It took me a very long time to make it as a published author. When I finally did, my debut novel won the RNA Joan Hessayon Award for newly published authors graduating from the New Writers' Scheme. It was a dream come true and one I'd almost given up on ever achieving.

More books - and life - happened. I'm six books in now, although it could be more, except that those life events, and a little thing called a PhD intervened. The PhD was another dream, one that I signed on for when I thought I was never going to make it as a writer - well, you can guess what happened ...

The doctorate was something that I could control, with hard work and application - although it took a lot longer than it was supposed to - life again.  But once I was published, I moved on to another dream. I dreamed about becoming a finalist in the Romantic Novelists' Association RONA Awards. Another one that seemed almost unobtainable. But if you don't have dreams then life is very blank - and you have to have something to aim for ... 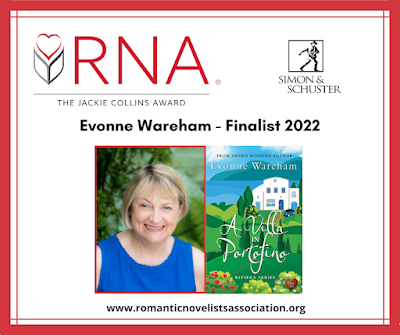 I've had this secret since the middle of January, but yesterday it was announced - I am a finalist for the RNA Joan Collins Romantic Thriller Award.

Will I win? Who knows? I'm in competition with some fabulous authors.

I do know this - even if I don't win, it is a thrill and an honour just to be nominated.

Dreams do come true more than once.