... which is why, at the weekend, I was doing what might be called active research.

I have a rom/com book in very slow progress which involves the heroine starting her own bakery. I have no idea when, if ever, it will be finished, or whether the publisher will like it when it is, but for the moment it's the WIP.  Which is how I came to spend last Saturday in the company of eight other ladies, one brave gentleman, a vast amount of equipment and an inspiring teacher, refreshing my bread making skills. 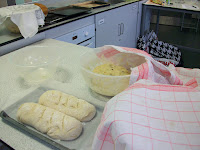 I have made bread before. I'm not revealing how many decades ago that was, but the techniques and a few new ones that teacher Claire recommended did come back. My first effort was a sad little pancake, but by the time I got to the focaccia I'd got into my stride and was quite proud of the results. We also learned how to turn bread dough into buns, which I was thrilled about, as one of the plot points of the book turns on a bun, as it were. 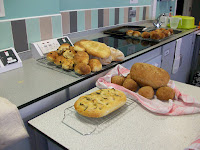 It was an energetic day, and I came home shattered, but with a fabulous haul of new bread and up-to date experience of the whole process.


Research - it's not just about stuff you read in books or look up on the Internet. Sometimes it's about learning and actually doing stuff too.
Posted by Evonne Wareham at 08:00 2 comments:

When the machine knows more than you do. Or thinks it does.

That's the spell checker, in case you're wondering. Don't get me wrong, I love the little beast. I shudder to think what my manuscripts would look like without it, as I've never been able to spell, despite the efforts of numerous people to try to teach me. That's why my hand writing is so bad. If you can't read it, you can't tell me it's spelled wrong. The typing is a bit dodgy too. And don't get me started on the voice recognition software ...

But sometimes the spell checker gets just a bit full of itself. I find it fascinating to watch auto correct doing its thing on a jumble of letters and turning it into what I thought I was typing, but some times, no, sorry, that's not what I wanted. Sometimes that's OK, we can negotiate. Sometimes it's a pain.

People have asked me how Andrew Vitruvious, the hero of What Happens at Christmas, got his unusual surname. Well, the answer to that is, the spell checker chose it. Originally he was called Ventris, but the spell checker kept giving me Vitruvious, and in the end I gave in, and now I like it. It's different, to say the least.

That one worked out, but at the moment the spell checker and I are wrangling over what it thinks I meant and what I did mean, and I'm not giving up on this one. I can't, because this time it's not something I have a choice about. When writing about the Second World War - thesis, long story - the phrase 'heavy raid' makes sense. It's what I want to say. What I need to say. What I am saying. And I'm saying it quite often, it appears, the number of times we're arguing about it. (I can tell you all about the heavy bombing raids on Cardiff, if you have an hour or so. Oh, you don't want me to?)

Unfortunately I keep typing 'heavy riad', which doesn't help, and spell checker doesn't know I'm writing about the Second World War and keeps wanting to change it to 'heavy rain', which is no good at all. Even when we both get it right, it doesn't give up. It keeps showing me the word highlighted in blue, to tell me it still doesn't approve. I keep telling it that's what I want. And it still isn't listening. It thinks it knows better than I do.
Posted by Evonne Wareham at 08:00 No comments:

Always something to think about

On Tuesday I had a fabulous day.
I got out of the house and away from the second word war for a whole day.
I spent it in the company of the lovely and talented writers from the Romantic Novelists' Association Marcher Chapter.
The amazing ladies from Liberta aka Sophie and Joanna put on a terrific workshop for us on adding bling to your work.
It was great to talk books and writing for a day.
It was great to have the opportunity and the stimulation to think about the nuts and bolts of writing - the chance to step back and absorb
It was interesting to see how six different writers tackled the short exercises, and yes, we all produced very different results from the same prompts, but we all went for the dark side when it came to choosing three atmospheric words. Maybe it was Storm Gareth and torrential rain what did it.
It was worth leaving and arriving home again in the dark.
And now ... back to the war. I have some fascinating stuff on the Ministry of Home Security ...
Posted by Evonne Wareham at 07:00 No comments:

On not reading serious books

Anyone who knows me knows that the part of my brain that doesn't do the academic stuff is mostly full of feathers. Actually, I suspect the feathers are trying to invade the academic bit, but that's a story for another day.

The feathery bit of me doesn't read serious book unless absolutely necessary. Like research or something. I have lots of samples of books on my Kindle - Marlowe and Shakespeare, labyrinths and mazes, Queen Guinevere, various guide books, railways, grimoires and other spooky stuff, - all research which I will turn into full scale books when the time is right. Or maybe write. At the moment they are marking the place, as it were. Otherwise I only read trashy books. Nothing that is going to teach me anything, preferably as far away from real life as possible. I can get plenty of real life at home, thanks.

Which makes it rather a surprise that I am currently reading Phillip Pullman's Daemon Voices, which is a books of essays (yes, essays) on storytelling. It's a serious book, made up of lectures and short articles and programme notes and other odds and ends, with an index and everything, and I am enjoying it. I think the last time I read essays was Orwell and that was in school, but this is about telling stories, and about being a writer, and what sort of writer and where do you get your ideas from and all that kind of thing.

I don't do book reviews either, and this isn't one, but I think a reader would be interested and a writer fascinated by a lot of what Pullman has to say. I am.
Posted by Evonne Wareham at 09:30 No comments: