Celebration of release day - the What Happens at Christmas Location Tour.

The official release day for the paperback and audio versions of What Happens At Christmas is on Saturday 1st December!! (Although there have been some early sightings around the country.) To celebrate I've put together a short location tour of places that feature in the book. Unfortunately none of them involve snow- you'll have to imagine that for yourselves.

The armchair tour is on the Pages spot at the top of the blog. All you have to do is click for a glimpse of  the Brecon Beacons and Chelsea.

I hope you enjoy it. 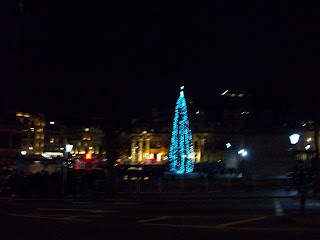 Should you ever try to revive an old manuscript?

When you have been in the Romantic Novelists' Association New Writers' Scheme as long as I was, it is inevitable that you have a lot of  old manuscripts in the drawer - and I mean a lot. Most of them will stay there. One or two might have possibilities if I have time on my hands and plenty of patience. Hah! But there are two I definitely want to go back to. Funnily enough, neither of them are finished. Maybe not so funny - is that the appeal? Unfinished business?

The first is an historical - a Georgian romantic suspense submitted as a partial MS that was my very last NWS submission before I was published - with  a contemporary in the same genre. It got a good report and I would have gone on with it, but then publication happened and it went off to that bottom drawer with the others. I wrote it for fun, but since then it has stayed with me, and ideas for making it a series that will connect to something contemporary have been growing, so I definitely think it is worth another look.

The other one was my first attempt at a contemporary romantic suspense. It got quite a good report. I was usually told I could write, which was encouraging, but there was an awful lot that was wrong. I think, looking back, it suffers from a common fault of inexperienced writers - there are two stories in there fighting with each other, or maybe a story and a half. Too many good ideas and not enough space to put them. It started with a Romeo and Juliet story of young love and tragedy and then resumed with the lovers 15 years later. My reader wasn't happy about that - I remember the comment that the heroine in particular was too young and that her mother was more interesting and the way it was written a reader could easily assume she was the heroine  ... And so on.

I decided to start a new novel rather than try to unpick that one, and I know the next attempt went a lot better - I think it may have eventually turned into Out of Sight Out of Mind, but I'm not sure.

The unfinished manuscript still came back into my mind now and then - there were a lot of things I liked about it and the hero, Luke, was one of my favourites. I can't remember the name of the heroine, but her mother was called Nadine - which might give some credence to the comments of my NWS reader ...I half promised myself I'd  have a look at it again, to try and get out the book that was lurking in the undergrowth. Simplify the story - turn it round so the R&J bit was a flashback interlude - possibly give it a new villain. Or a new motive. And probably get rid of the heroine's mother! She might get her own story in quite a different book.
One day ...

I've been using scrap paper to write on lately and a couple of the pages, when I read them, turned out to be old drafts of that book. I was surprised how good the dialogue still sounded. And I still fancied Luke ... And then I heard a scientific programme on the radio that gave me a lead on a plot point that had been a stumbling block that I hadn't entirely resolved, which I am now researching, and the book is now back on the table.

It will take some work and it's not going to happen soon, but I am certainly promising myself I will have a go.

And the motto of the story? Never throw anything away.

The use of silence

Writing this in the week when the Armistice that ended World War One was commemorated, when the two minute silence is one of the most universal and poignant parts of any ceremony, has prompted thoughts on the power of silence to a writer. Aspiring - and not so aspiring - writers are told, or reminded, about using all the senses, and hearing can encompass all types of noise, from rain on the roof to opera to the sound of waves on the shore - which can be remarkably noisy, as you learn when you live by the sea. Some writers like to have music while they work, and will make a play list for a particular book. Sounds are very emotive for creating atmosphere - a distant bell, footsteps in an empty corridor, the sound of a door closing, very softly. All creepy, all very simple.

But what about silence? Not easy to convey in a book. Yet we have probably all experienced that feeling when silence has been so strong it almost seems like something you can touch. It can come in an empty, desolate place. It can be significant when there is an absence where there should be a presence - no sound were there should be one, like a heart beat. Silence in a conversation can speak volumes that words don't.

Silence might be a little difficult to convey. It needs some thought. It's not an easy option, but it can be powerful and worth thinking about.

I have two books in the half completed pile, which I am waiting to get back to, that open with a silent house, one an historical, one contemporary. I probably have both of them as neither manuscript is finished - I might have avoided repeating a similar scene if either was published - but I hope as they are different genres it will be OK. It's clearly a scenario that appeals to me. In both cases my protagonist -one male, one female,  is alone in an empty house where they have long memories and associations, and it is the prelude to leaving and beginning a new life, in neither case one that is sought or looked forward to. It is a scene of goodbye, and a certain amount of heartbreak. I hope it is a powerful beginning to the book. In both manuscripts I had to think about the effect of silence - in this case on memory. That absence where there should be presence - a kind of metaphor for all they have lost.

Fingers crossed that they work.

Now I'm keen to get back to them. Soon.
Posted by Evonne Wareham at 08:00 No comments:


For those not into the jargon - NaNoWriMo is a collective madness that seizes large numbers of writers during the dark month of November and provokes them to try and write a book - or the first draft of a book, in a month. And one of the first cautionary tales of the attempt is that it is a first draft, not an oven ready book. Basically you commit ( I use the word advisedly) to about 1,700 words a day to reach a total of 50,000 by the end of the month. And, of course 50,000 is more like  a very healthy novella, given that most books are in the region of 80,000 - 90,000, but you get the idea. If you sign on you get various encouragements and the chance to buddy and other stuff. There's a link at the bottom of the post if you want to know more from the official source.

My knowledge is not complete, because I've never done it. In fact the idea has always rather struck terror in my heart, but that, I realise now, was for reasons of time. When I was working and caring and then just caring, it was an impossibility - I was just too damn tired to try. And for the last six years (ahh, panic - six years!!!)  there's been the PhD. I have produced books as well in that time, but never against the clock. And this November is no different, although I have been taking an interest in the friends who are trying it and beginning to think .... maybe?

The PhD is still with me. Yesterday, I had a Very Low Day and if I had had access to a wheelbarrow, the whole lot would have found it's way into the sea, but I feel a lot better today. Ups and downs and 'Why did I ever start this?' happens. Not unlike writing a book. I'm also thinking about the time after PhD - with or without the assistance of the wheelbarrow. For better or worse the PhD will be gone by next November, and the idea of taking part in NaNoWriMo is starting to look ... well, interesting. I might actually have the chance to write and get somewhere with the word count and the deadlines. So, it's a maybe.