Everyone must know by now that because I write romantic suspense, I claim to go to twice as many literary parties - those for romance and those for crime writers. And that applies to conventions too. Last year I went to the ginormous RT Booklovers convention in Kansas City, so this year for my trip across the Atlantic I chose Thrillerfest. Not quite so big, but just as fascinating/informative/enjoyable.

What is Thrillerfest? It's the annual get together of an organisation called International Thriller Writers - which is, you've guessed, exactly what it says on the tin. Thriller writers from all over the world. As well as holding the convention they have an e-magazine, present awards and publish their own anthologies, with contributions from some of the biggest names in the business, which is how the organisation finances itself. The current one is called Face Off  with authors like Lee Childs and Steve Berry donating stories. I'm going to include a fact file at the end of the blog post, and you can get more details from the sites in the links there.

Who attends? Just about everyone, predominantly authors and aspiring authors and mostly from the USA, but with a strong sprinkling from the rest of the world, which this year included me. Plus fans and readers and industry professionals from all branches of the publishing world.

Where is it held? Always in New York and always at the Grand Hyatt on 42nd Street, which is right next to Grand Central Station - good for fast food and transport links if you are hungry/want to do the whole sight-seeing thing. The hotel's public rooms are impressive and an excellent setting.

What goes on? There are a variety of strands and events - for fans, for aspiring authors who want to pitch to publishers and agents, for authors looking to hone craft skills and for everyone interested in what makes up the thriller scene today. Panels, receptions, a gala awards dinner ...

I signed up for the core conference, which was from Thursday 8th to Saturday 12th July. I was part of a panel. I went to a fabulous 'extra' day, with the New York FBI. I spoke to Ian Rankin in the elevator (and no, I'm sure he won't remember our memorable conversation. Me 'Have you just arrived?' Ian 'Yes'. Then we stopped at his floor, and that was that.) I took a trip to the roof of the hotel. I had lunch at the famous Oyster Bar in Grand Central - and no it was not oysters. I indulged in a little shopping. (Victoria's Secret and Sephora for Bumble and Bumble shampoo, if you must know.) I took pictures of stuff that only a writer would want to photograph and managed not to take pictures of things that I probably ought to have. And I met and/or listened to some amazing people. I had a great time.

Having set the scene I'm going to end there. What I write isn't called 'suspense' for nothing.

Next week - my journey through Thrillerfest. Hanging out with the FBI, meeting some big names in the Romantic Suspense world, talking about strong story lines at 8 am ...

There really should be a maid service especially for those returning from a holiday. I'm just back from a fabulous two weeks in the United States, which took in the amazing Thrillerfest convention in New York. 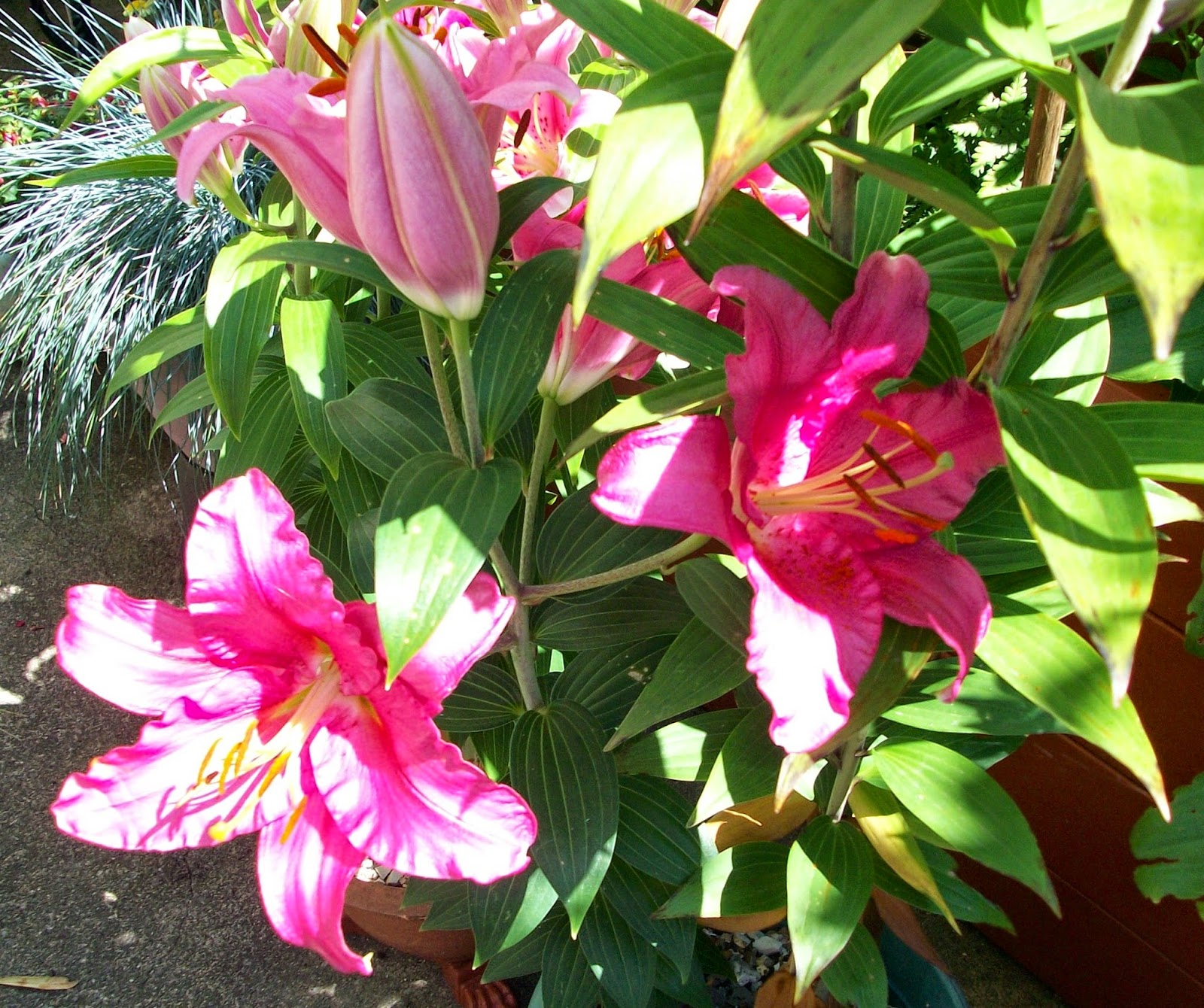 You'll recognise the scenario - a mountain of washing, a garden that looks like a jungle - the bits that haven't died or attempted to escape into next door to get some attention, a teetering pile of mail. And bills. An empty refrigerator. Nearly 1000 emails to be dealt with, as my account went into deep sulk and wouldn't let me in while I was away. And I haven't dared look at my university account yet.
But my lilies waited until I was home to burst into full flower - so there is something good in the garden. I thought I'd share a picture - I can't share how fantastic they smell - you'll have to imagine that.

I'll be blogging next week about Thrillerfest - hanging out with the FBI, sharing an elevator with famous authors, speaking on a panel about building strong story lines ...

In the meantime - if you could just hand me that box of washing powder over there  ...
Posted by Evonne Wareham at 08:00 No comments:

The Quality of Silence

Having lived in London for may years, where it is rarely quiet, even in the early hours of the morning, one of my favourite things about being back home in Wales is the silence. Especially at the moment, when we are having some summer weather, and I can sit out in the garden with the first cup of tea in the morning. You can almost touch the silence, except for the odd gull on the roof. When it's very still, I can hear the clock chimes and the peal of church bells from the mainland. Not exactly silence, but something that is possible because of it. Of course, when the sun shines and the beach is full there are plenty of other sounds- traffic, the funfair ... 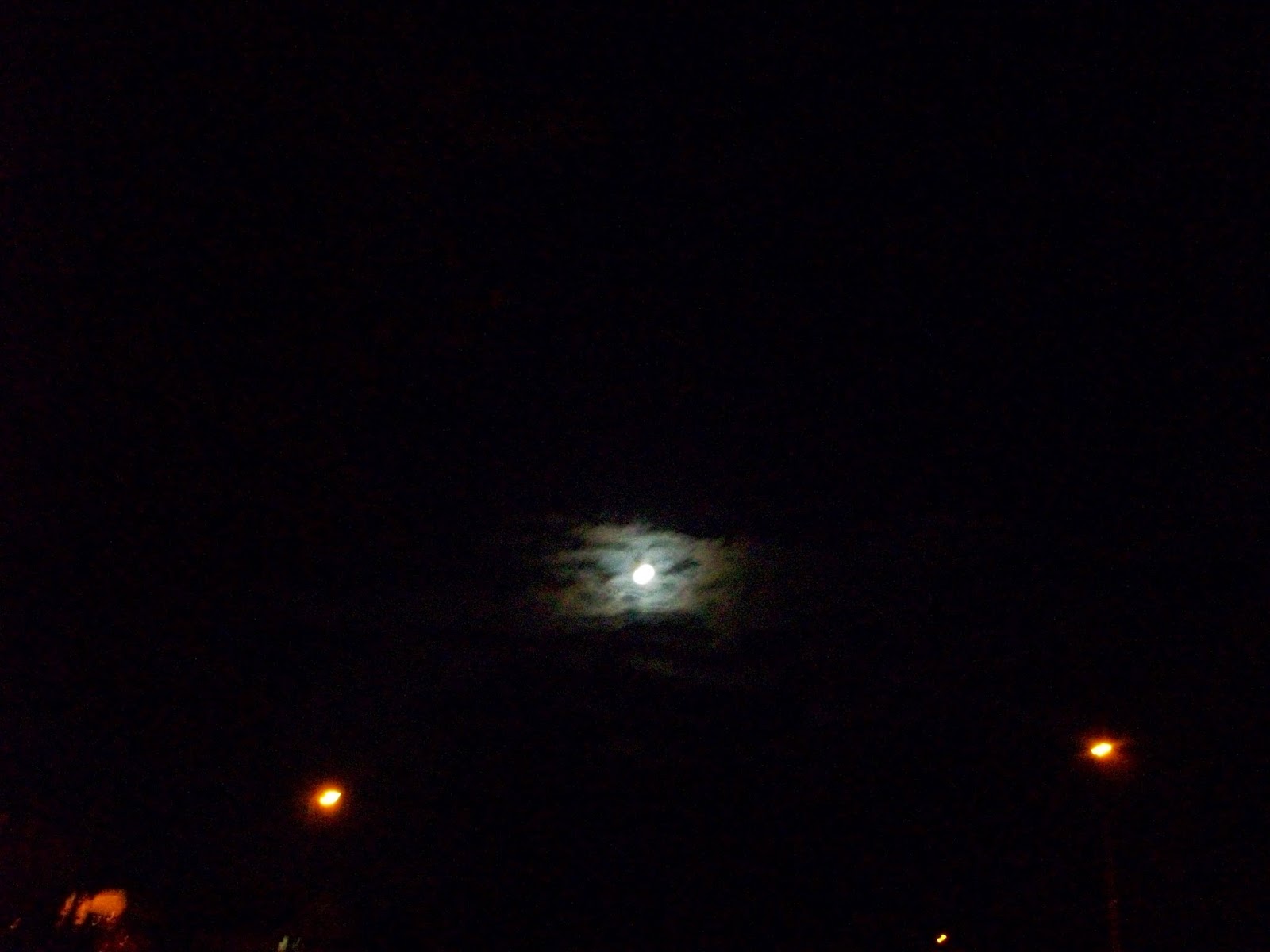 Then there is the silence in the middle of the night, when the rest of the world seems to be asleep and only you and the moon are awake. Until the local cats decided to come and sing under the window. You don't get that in London - or at least, not in a 5th  floor flat!

But silence can be a powerful thing. One of may favourite playwrights , Harold Pinter, is famous for his pauses - the use of silence to convey an atmosphere - usually something menacing. Perhaps it's the playwright's influence, but my heroes tend to be big on manipulating silence. If you don't speak, then other people feel compelled to fill up the gap. And maybe give away more than they intended ...

I've been thinking about how to convey an ominous silence too - not quite so easy in a book. People talking - well you just write down what they say - but when no one is speaking? It's all down to conveying an atmosphere. I'm playing with a scene set around this time of year, when the nights are short and something distinctly threatening is about to be revealed, just as the dawn comes up. Pale light first, then strange shapes where bushes and undergrowth are not fully visible. Maybe a little rustling sound that might be the breeze, or a bird or an animal.
And a figure, standing motionless among the trees. ....

By the time you read this, I will be in New York.

Attending Thrillerfest. That's a gathering of some of the biggest names in crime and thriller writing from both sides of the Atlantic. It's going to be hectic and I hope it is going to be fun too.

And the big big news - I'm going to be on a panel VERY early on Friday morning (11th July) with authors Matt Cook, Dani Pettrey,Ursula Ringham, Suzanne Rorhus and panel master Kelli Stanley discussing how to build a strong story line, one brick at a time. Apart from having to be on stage by 8 am, I'm really looking forward to it. Although, with the effect of jet lag, my body clock will be thinking it's lunch time, so maybe that won't be so bad. And after that I'll be signing books.

If you're attending Thrillerfest, I hope you'll chose to come along.

If you're not, I'll tell you all about it when I get back.

Email ThisBlogThis!Share to TwitterShare to FacebookShare to Pinterest
Labels: Thrillerfest

One of the best things about living on (almost) an island, is being surrounded by the sea - the other is the number of bays and beaches. Although we are connected to the mainland now by a road and rail link, this didn't happen until just over a hundred years ago. And we still have the bays and beaches.

They get into my writing. Especially at the moment, when the sun is shining and I'm brewing a new novella set on an imaginary stretch of coast that - surprisingly - bears a strong resemblance to where I live, but re-organised to suit me.

It's not all sunshine though, the beaches are just as good in the winter, provided you can stand upright in the wind. Sometimes they are better, as you get them to yourself, if no one else is mad enough to venture out. 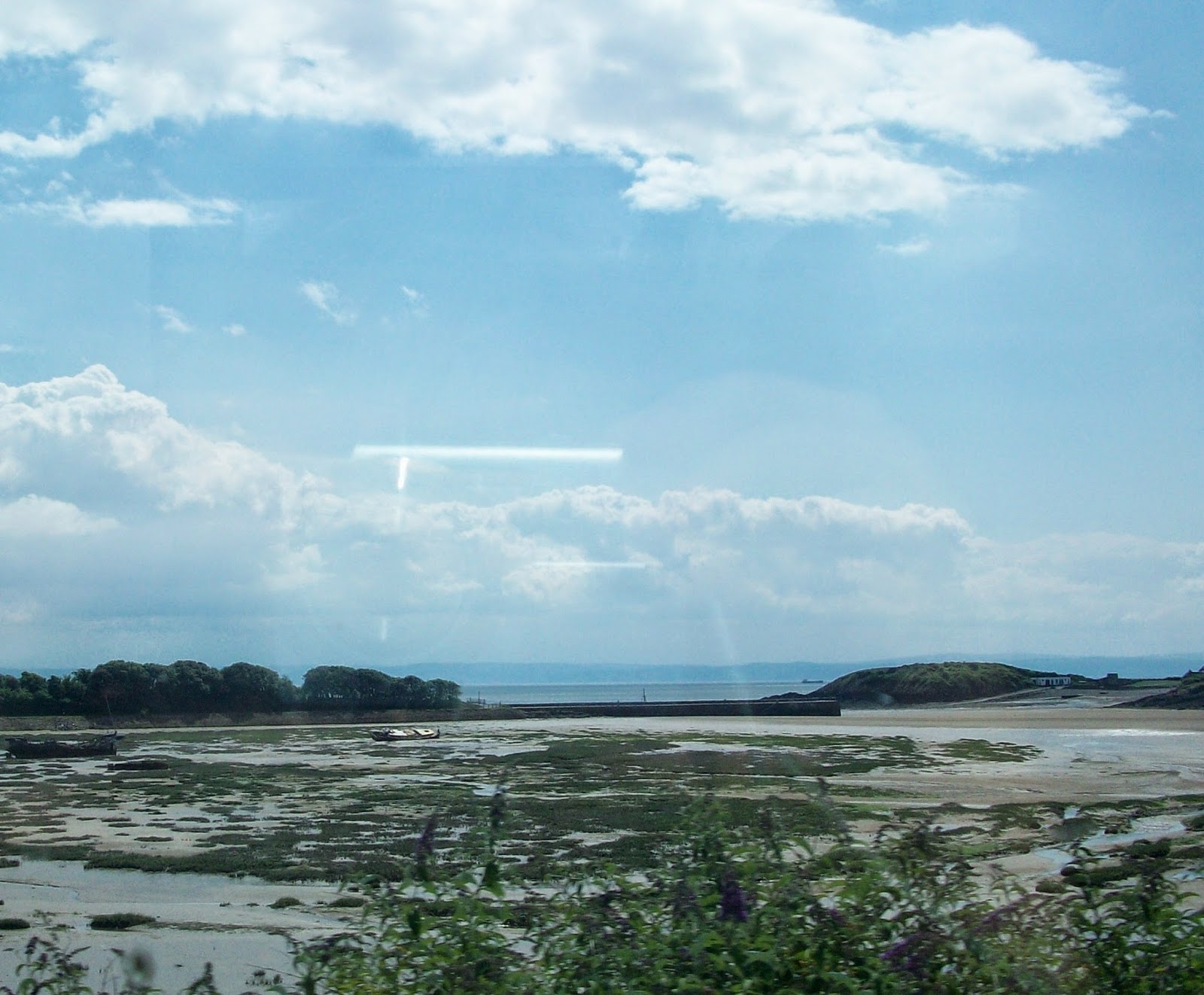 I was trying to think of a way to describe what we are, now we have the mainland links - and came up with lots of lovely words. Hey, I'm a writer, I love words. I was wondering about isthmus (try saying that after a few beers) 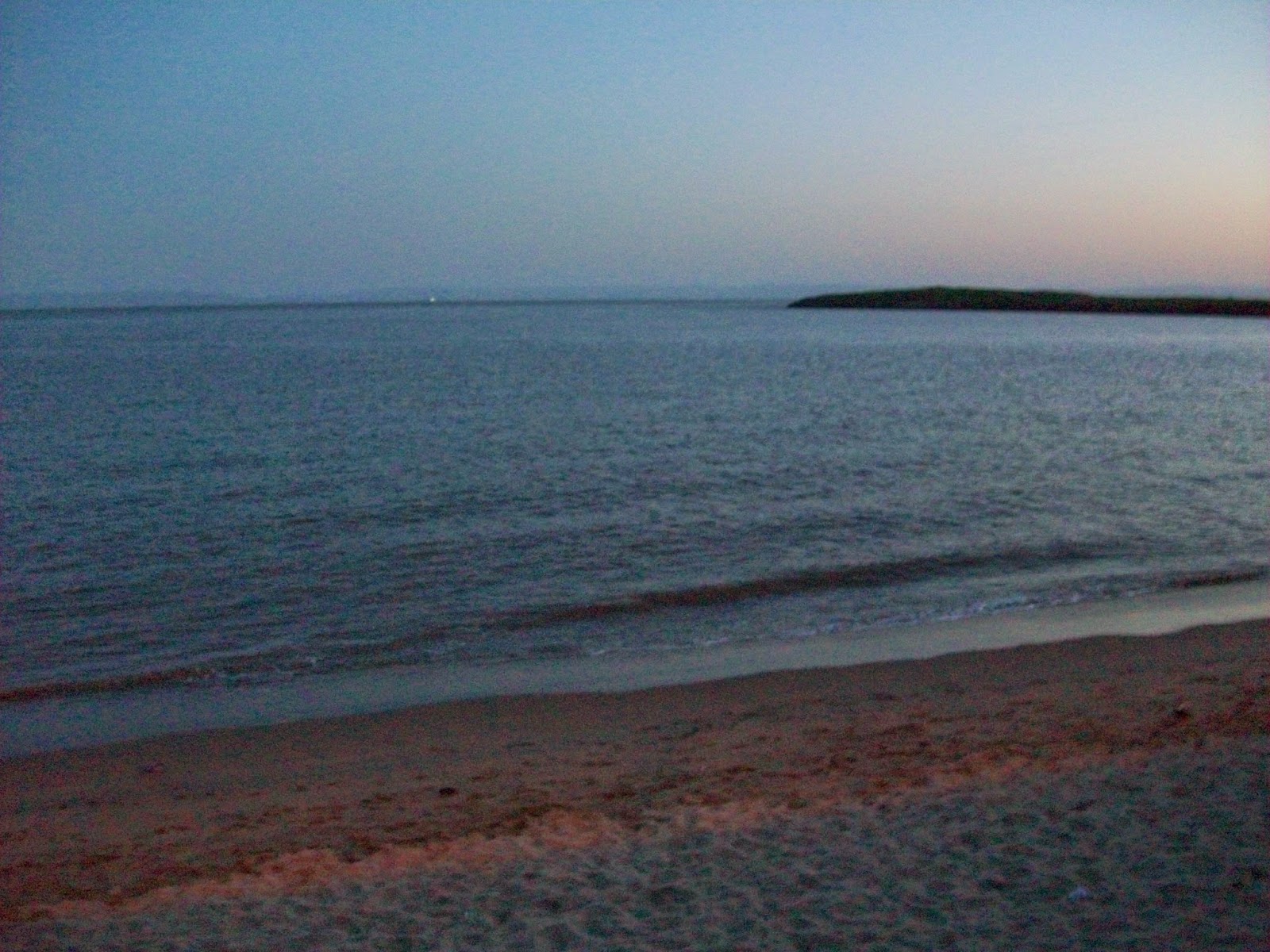 but apparently that is a strip of land with sea on either side, linking two bigger pieces of land, so that is probably what the causeway to the mainland is. Then there's peninsula, which is a long narrow piece of land, projecting into a sea or lake. (You can tell I took the Oxford dictionary to bed with me last night) We might be a peninsula, but we're not long and narrow. Then there's promontory, which is probably my favourite, because of it's Shakespearean connections. The quote I have floating about in my brain soup has something to do with a mermaid. I would have said it was The Tempest, but apparently it's Midsummer Night's Dream. Both plays are favourites - Tempest, because it's set on an 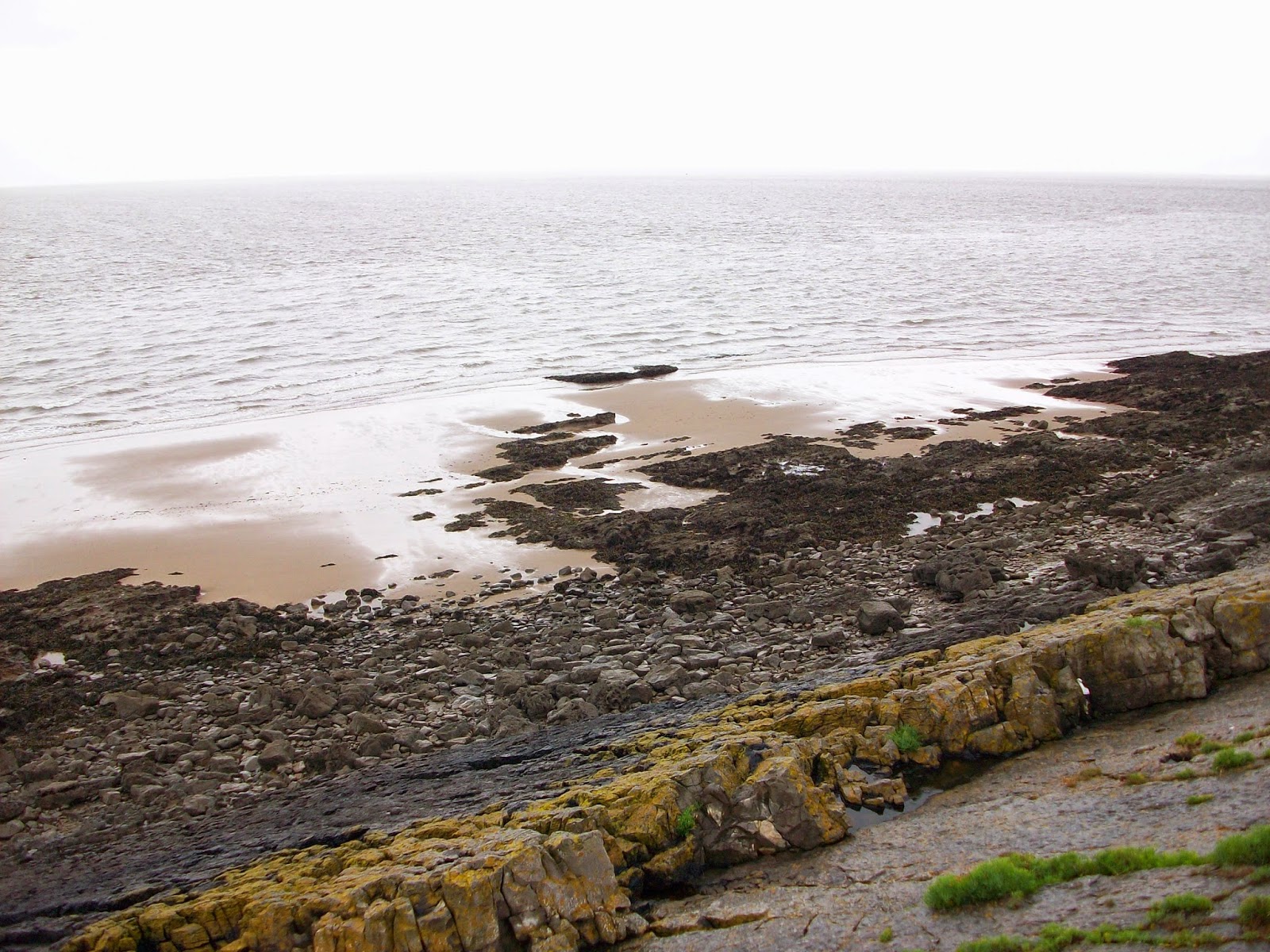 island, of course, and Dream because it's set at my favourite time, Midsummer - although the weather described in the play is not actually very pleasant. I suspect they were having a lot of rain when it was written. Dream also has Oberon - an  archetypal alpha male and one of my first on-stage crushes. And of course they both have magic in them, which just about makes them irresistible.


But this is a long way from a promontory, which is apparently a high cliff jutting out into a sea or lake.  Now I always imagined it as a long finger of land - more like a peninsula, actually. It just shows you what you can learn from the dictionary.  (and I have to say, from the Internet, where you get pictures.) 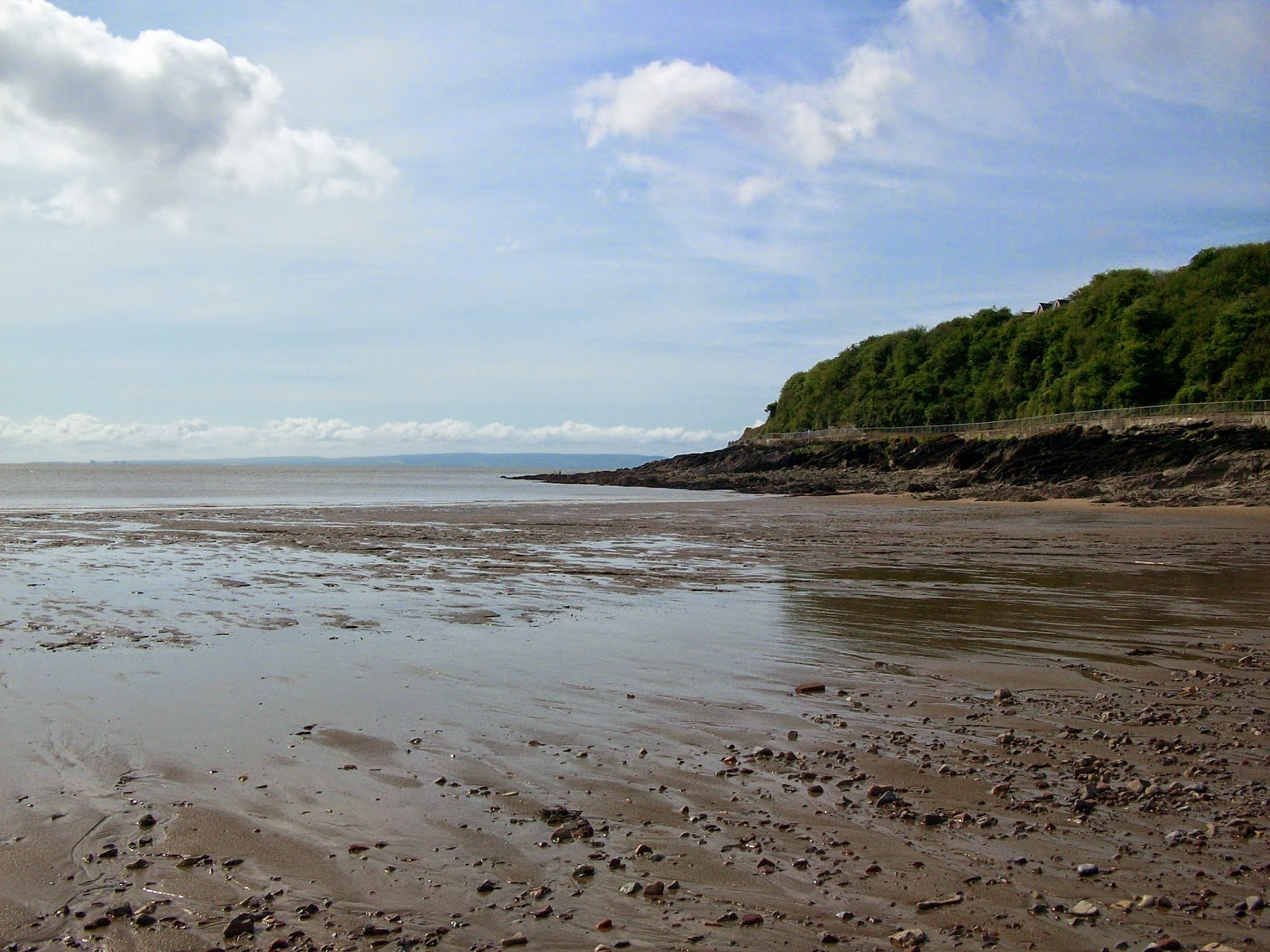 We probably have all three of those things on the Island.  I've attached pictures, so you can have a look.

That's another thing about being on an island - there's always something to photograph ...
Posted by Evonne Wareham at 10:59 2 comments: