I don't do a lot of original tweeting - maybe a bit of promo here and there, especially if there is a new book about, or a special sale going on somewhere - but I do re-tweet quite a bit. And that got me thinking about how much your re-tweets say about you.

Books Well yes - what  did you expect?  Especially on a Tuesday,  because Tuesday is the day when members of the Romantic Novelist's Association  re tweet each others news and most of it is about books.


Historical stuff - an overlap from the day job and  tends to be from my favourite archives.

Museums and historic houses and gardens - especially if they have events on.

Posts from Visit Wales - particularly those about the Brecon Beacons as that is where the last book was set and there have been some lovely ones of the Beacons in snow, which is also in the book.

Italy - also because it is a favourite setting for books

Lectures and talks and events

The occasional spooky/ghostly stuff, if I happen to be researching that kind of thing at the time.

London - one of my favourite places and again a book setting.

Looking at the list, it's pretty predictable really, and it does say a lot about the things that interest me. You are what you re-tweet?

Yesterday was the Spring Equinox. My favourite of the four compass points of the year - equinoxes and solstices - as the days are going to continue to lengthen for a while and there is the prospect of warmer weather. Having said which, there is some talk of MORE snow for the Easter weekend!

The Equinox has made me think of our continuing fascination with thing that are associated with old traditions and celebrations, with a touch of the supernatural. Not paranormal, but old customs, myths and the slightly spooky elements that make it into so much romantic fiction - horoscopes, tarot cards, standing stones, time slip, fortune telling, ghosts - we may be an urban society, but old ideas still have power. I have to admit that I have a fascination and an ever growing library (Thanks, largely, to The Works!) of books on symbols, magic and other witchy goings on. This time it is all research, as I am far too much of a wimp to try any of it out.

Although I could have done with a few spells when my big computer, the one I do my writing on, died this week. I've had to get a new - well, re-conditioned - one and a new version of Dragon - the voice recognition software that I use to get the words onto the page. Both Simon the computer guru and the man on the other end of the phone who sold me the new Dragon were somewhere between astonishment and hysteria when they found that I'd had both for ten years. Well, if it's not broken ... So I have lost my dear old XP Professional and my disc based Dragon and now have to train a new one. I have a feeling it is not going to be easy. But I digress - probably because my mind is still very much on the disaster of losing kit that has become an old friend. We knew each others quirks. And I still have to transfer my backed up files to the new machine - shudder. Now that is really something horrible to contemplate.

But back to the equinox. I've been working on a romantic suspense that has supernatural elements in it - hence the research, although it will be a while before it gets finished as I'm now enmeshed in the day job and sorting out what I hope will be the next Riviera Rouges. Nothing supernatural in that.

I am wondering why we are drawn to darker things on the page, even if we don't really believe in them in real life. Why do we like being slightly scared? I don't read horror, or watch it, but I still have that fascination with an older system of belief and way of doing things.

Maybe lots of us are looking for a connection to something from the past - and that's why time slip in particular is a popular genre?

Adventures in the Archives 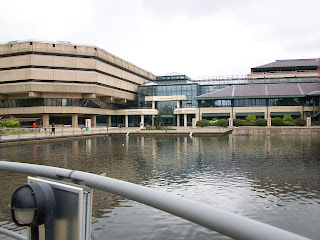 We all have quirks. I like archives. A hobby I have taken to ridiculous lengths by embarking on a PhD in History.

Last week I spent a fascinating few days at the UK National Archive, at Kew, in London. Well, I found it fascinating, although I can see that not everyone would find that tattered and dusty files make their heart beat faster. But they do mine. I get a kick out of poring through documents that were typed/written in World War Two, when the world was a very different place. Typewriters and carbon copies for starters.

The index can be a bit of a mystery tour sometimes You order a file and take a gamble on what will be in it and whether it will be useful. I stumbled on something that is going to have a major impact on the thesis quite by accident, in a file I was looking at for a totally different topic. It was about air raid shelters in a file that was entitled Parades, Celebrations and Visits. Of course, it was the last item in the file, with no indication of what happened next. And the next number in the file series was for another part of the country. So - what did happen next? Will I ever find out? The hunt is on. I may need Sherlock, or Poirot.

I had my first visit to the second floor - I didn't know there was a second floor - that's where they keep the big/heavy stuff. I got a large and very heavy box, presented on a trolley, that contained wads of very well thumbed and dusty accounts. I finally found the piece I was looking for, and, of course, it was no use to me at all!

I also had a file with a mysterious envelope fixed to the back. With assistance from the staff I got it open safely and found that it contained photographs - supplied by the Chief Constable of Cardiff to the Parliamentary Secretary to the Ministry of Home Security, showing bomb damage to air raid shelters. Another first - I got issued with a pair of rubber gloves to handle them. It is probably many years since anyone looked at those photo. Until me.

One of my files appeared to be quietly morphing into a werewolf - it was distinctly furry - on the outside. After a discussion with the staff we speculated that it was some sort of preservation that had been put on and was breaking down. The file was about 70 years old. Apparently there are a few more in the vaults that are doing the same.Of course it was nothing sinister. But if members of staff start to disappear down amongst the stacks ...

I did a bit of sleuthing too, into my father's war. The war diaries of the RAMC unit he was attached to, and their progress up Italy. Scary and illuminating. That's for a book that I hope to write someday. I didn't find his name in any of the documents, but I still have fingers crossed on that one.

So - that's the fun week I had last week, playing in the dusty archives.

It takes all sorts.

Where are my pictures?

DON'T KNOW WHAT HAS HAPPENED TO MY BOOK COVERS, ETC. SHOWING SOMETIMES AND NOT OTHERS.

WILL HAVE TO INVESTIGATE.

TECHNOLOGY!
Posted by Evonne Wareham at 18:15 No comments: 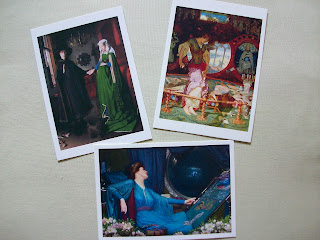 On my last lightening trip to London, I was able to squeeze in a trip to see the Reflections: Van Eyck and the Pre-Raphaelites Exhibition at the National Gallery. I was attracted initially because of the Pre -Raphaelites, who are among my favourite painters, but I'm also a fan of the Van Eyck picture that was the starting point of the show - the Arnolfini Portrait. That's the one with the young couple holding hands in a bedroom that might be a wedding or a betrothal and where the woman may be pregnant. Or is it the style of the dresses of the time? Lots of mysteries about the picture’s subject matter, which is always a fascination. Funnily enough there is no mystery about the history of the picture as it has quite a comprehensive provenance right from the time that it was painted. That too is interesting as it survived war and moves through several countries before ending up in London.

The theme of the exhibition was the influence that portrait had on the Pre-Raphaelites and one of the major links, surprisingly, was mirrors - particularly convex ones. It had never occurred to me how many of the Pre-Raphaelite paintings feature mirrors. As The Lady of Shallot was one of their favourite subjects, perhaps it should have. The various depictions were fascinating and the chance to look into one of the mirrors which was owned by Dante Gabriel Rossetti was a high spot for me – one of those spine tingling moments.

Of course writers like mirrors too – illusions and images which may or may not be real. Smoke and mirrors. As I have been outlining a piece of work that involves a music hall magician, I think I may be introducing something involving a mirror into that. It is a long term project though so will not be seeing the light of day for a while.

It’s also given me a yen to own a convex mirror of my own. Although it won’t be as spine tingling as Rossetti’s.

Although I suppose that might depend on whether it finds it's way into a book.


Posted by Evonne Wareham at 08:30 No comments: