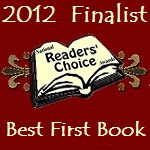 Writers will tell you that there is nothing to beat the feeling when your first book is accepted for publication. It's a time of euphoria, but when your feet start to make contact with the ground again, it's a scary time too. If you have friends in the industry you know that the work begins NOW. Edits, followed by promotion of the book, followed by ...

That's the scariest point of all - the book goes out to the public. Readers. People who have paid for you to entertain them. Your publisher had faith in you, which is reassuring, but it's no guarantee. There are an awful lot of books out there. A recent trip to the London Book Fair confirms this, if it needed confirmation. (More about my visit to LBF next week.)
Your book is there - friends and family buy it and say how much they love it. Then reviewers find it and make their judgements ...

My second book, Out of Sight Out of Mind has just made that journey and I'm glad to say is collecting some generous and enthusiastic reviews. But the story has not ended for my debut novel Never Coming Home.

I'm delighted to announce that Never Coming Home has been chosen as a finalist for best first book in the Oklahoma Romance Writers Of America National Readers' Choice Awards.

I'm so pleased to be chosen to be part of these awards. It's an honour for my first book and even if I don't win, I will treasure the nomination. My thanks to all those involved in organising and judging the contest, for their work in making it all happen.
Posted by Evonne Wareham at 12:00 1 comment: 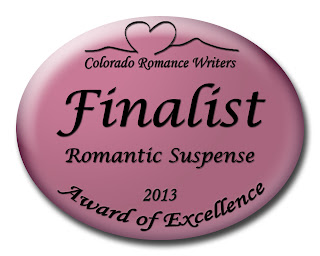 I'm pleased and excited to be able to display the badge above - which was awarded to my debut novel Never Coming Home for achieving the final of the Colorado Romance Writers annual Awards of Excellence, in the category romantic suspense. The winners of the awards will be announced later in the year. Do I have hopes? Of course - but I know that all those other books in my category will have as much heart- stopping romance, and be as thrilling, as their authors could make them. The competition will be strong, and the ultimate winners are the readers, as everyone strives to produce the very best book they can.

Just to be in the final, with my first published book, is an honour. I wish every success to all my fellow nominees, in all categories, and my thanks to the organizers and judges who give their time to make the contest possible.
Posted by Evonne Wareham at 12:03 No comments:

Heroines and careers... and books

We're right in the middle of National Gardening Week - 15th to 21st April. 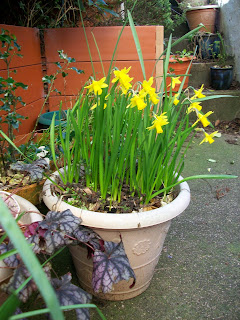 What has this got to do with a writer of romantic suspense? Well - one of the themes of this year's Gardening Week is careers in gardening, and it just so happens that Kaz, the heroine of my debut novel Never Coming Home, is a landscape gardener.
When I was choosing a career for her I wanted something that combined the artistic and the practical. If you've read the book you will know why - if not, I won't spoil it. Gardening seemed to fit, and it was something I know something about, and enjoy, although I am no expert. I wanted her to be independent and resourceful. Giving her her own business to run, very successfully, seemed to illustrate this.
Madison, the heroine from Out of Sight Out of Mind, is a research scientist. Neither career is in any way out of reach for a woman, but both are slightly unusual. It seemed to me that this feeling of being just a little different calls out qualities in both of them that are useful when they suddenly get plunged into mysterious and life threatening situations. As you do, when you run into a romantic suspense novelist in full plotting mode.

This week is also the London Book Fair. I'm planning to attend for the first time. I'm hoping to meet friends and learn things, always an interesting experience. I shall probably tell you all about it next week.

Once a book is published - when it grows up and leaves home, it takes on a new life. It's making its own way now, in the world of readers and reviewers. All the writer can do is watch from the side lines. It is wonderful to hear that a reader enjoyed your book. That was what made you write it in the first place. Not so good if they didn't enjoy it, but everyone is entitled to their opinion. Good reviews make you happy, bad ones make you wince, sometimes particularly perceptive ones make you thoughtful. Getting awards, or being nominated for them, is the icing on the cake.

I've been incredibly lucky with my debut novel, Never Coming Home. It's been nominated for a number of accolades and won a few. I'm immensely grateful to various reviewers and judges who liked it enough to put it forward. I can honestly say that every one of them has been a complete surprise.

And late on Wednesday night I had another surprise. The nominees and winners of the RT Book Reviews Magazine Reviewers Choice awards were announced. I clicked on a link to see if there was anyone there that I knew. There was - me. Along with Sharon Sala, Diana Layne, Joya Fields, Robin Covington and Teresa Hill I was a nominee in the Indie Press/Self Published Contemporary Romance category. I hadn't won, that honour went to Sharon Sala, but just to be nominated was a terrific thrill. Wildest dreams territory. In fact, so wild I e-mailed my publisher early next morning to check that I wasn't imagining things. I'm a writer - we do have vivid imaginations.

The reply came back promptly - yes it is you.

I'm going to be attending the Booklovers Convention organised by RT Magazine in Kansas City this year. To be going as one of their award nominees is a fabulous feeling.
Posted by Evonne Wareham at 13:07 2 comments:

In a few weeks time I will be one of a party of Choc Lit authors attending the RT Booklovers' Convention in Kansas City. It's a huge event and it is going to be pretty hectic - talks, signings and panels. I'm going to be helping out on Sunday afternoon when Juliet Archer leads a session on Jane Austen. As Juliet is Choc Lit's Austen expert, re-imagining the books into modern settings, and I write contemporary romantic suspense, and am in no way an Austen expert, this might have resulted in me simply volunteering to hold her coat and mind her handbag while sitting, fascinated, along with the rest of the audience.

But I thought I should make an effort at something I could do. I could visit Bath and look at some of the places that would have inspired Jane and influenced her writing. So I did. And took pictures. I'm still nowhere near being any kind of expert, but I hope I might be able to find one or two interesting remarks to make on the day. If not, I am reasonably adequate at holding coats and minding bags.

Two of Jane Austin's books are set in Bath - Northanger Abbey and Persuasion and there are references to the city in other books. As a spa town it was a popular place to visit in Jane's time - with shops, entertainment and the chance to 'take the waters' - to drink, or sometimes to bathe in, the waters of the thermal spring that were thought to have medicinal properties.

And as it happens the new novella which I am really going to finish very soon opens in Bath. So there is a connection. But it's not Jane Austen. 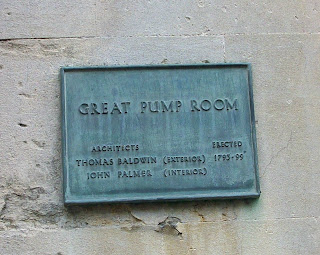 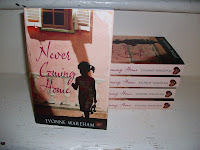 I'm on the Riverina Romantics site today - with a spotlight on  Never Coming Home and a give away. That site is HOT. Strictly adults only - with a gatekeeper to negotiate. Once inside there is a terrific mix of talent, from authors that scorch the page, to those that spice their romance with scary stuff - I'm in the company of previous romantic suspense authors, such as Cherry Adair, who have also been highlighted.  How did I get there? I won a promo package in the Romance Writers Of Australia 's virtual conference - Claytons, donated by author Eden Summers, one of the RR group. Many thanks!

If you want a chance for a signed copy of Never Coming Home, take a look.


Posted by Evonne Wareham at 10:33 No comments:

If it's good enough for Agatha Christie ...

I mentioned on this blog, on 16th January, that I seem to have been ambushed by a new idea for a book. I'm happy to say that it is still hanging in there and getting more complicated by the minute. It's staking a pretty strong claim to be the next thing written. It arrived with quite a bit of the story in place, but with the inevitable holes that need filling.

I've joked a lot since then about a necessary part of creating a book - staring into space and calling it plot planning, but actually that is not so far from the truth. I do like having the shape of the book, many of the scenes, and details of dialogue fixed in my mind before I start to write anything down. But I've never been quite sure where planning ends and procrastination begins. Am I fooling myself, saying that it has to be pretty much organised before I put pen to paper?

I recently re-read one of my old library of Agatha Christie classics - The Man in the Brown Suit - and in order to find out some of the background to how it was written I looked up the references in John Curran's brilliant book Agatha Christie's Secret Notebooks - which uses the notebooks she left to give fascinating detail on how the author planned and drafted her stories.

Imagine my delight when I found a passage (on page 67) quoting from a radio interview, recorded n 1955, when Agatha Christie confessed that she didn't have much method in her writing - that the real work was done before the book was written. (My italics) It was then that she spent time 'thinking' and 'worrying' about the development of the story, and that the process might take a long time.

Which is more or less what happens to me too.

So - my method of working is not as unusual as I thought it was. Which is very nice to know.
Posted by Evonne Wareham at 07:30 No comments: