Everyone has secrets
Some are stranger than others
But when you can't remember what yours are --
That can get you killed.


Out of Sight, Out of Mind  is a book about secrets.

Madison Albi works in a scientific research establishment that specialises in unusual talents - she doesn't make a habit of revealing that her special skill is mind reading.

Jay is an amnesiac - he knows he has a secret - probably more than one. He senses that it is a threat. But he doesn't know for sure.

The cover of a new book is usually revealed with an impressive fanfare.

But for a book about secrets - maybe it's better to be discreet about what it's going to look like ... 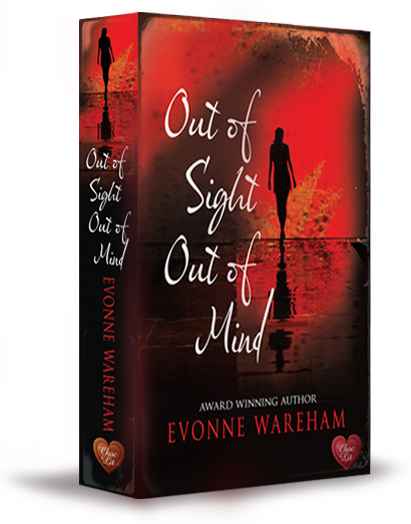 Walking in the rain

When you live by the sea, you always have somewhere to go. Occasionally I remember to take the camera with me.

Wales is unique. Apparently it's the only country in the world with a path around it's entire coastline. I live within ten minutes of a section of it, and walk there as often as I can. 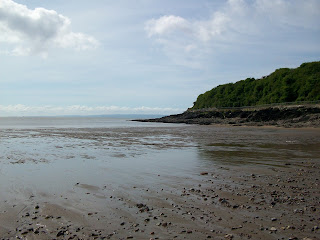 This summer it's mostly been in the rain. It's still lovely, and the noise of the waves is one of the most evocative sounds you will ever hear. The vegetation is thriving, threatening to take over the path at some points. 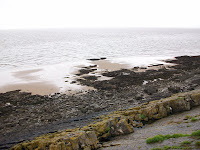 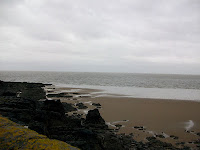 The sky and the sea are mostly the same colour on a dull day. And the rocks are black. Very sombre. Or dramatic. 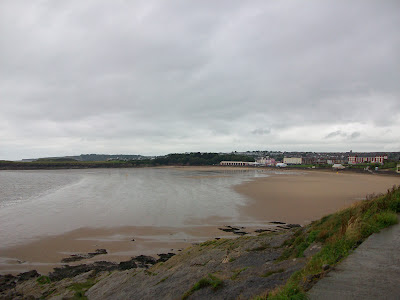 You have to be careful on this bit, if the wind is blowing. There's nothing between you and a drop onto the beach. Except a few of those rocks. Scary.

What else is there to talk about this week but the Romantic Novelists' Conference in Penrith? The Internet is awash with photos and reminiscences - and here are mine.
Fabulous goody bag this year. Lots of promo, chocolate and books. Suitcase on return journey was very heavy.  It wasn't the shoes, I only had three pairs. Sadly, none of them made it into the Beauty Pageant :( 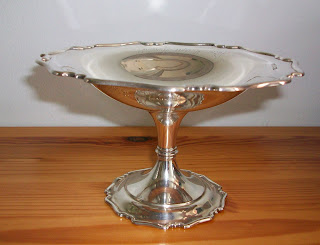 It's always a hard choice to decide what talks to attend, and this year was no exception. Full conference sessions at least take away that dilemma. It's become a tradition for the proceeding to kick off with celebrations of achievements during the year - stories of agents and contracts gained and books published and sold. My share of the celebration was to be presented  with the Joan Hessayan trophy once more. It now has my name engraved on it. I managed not to cry, this time. Just.
Janet Gover came all the way from the US to chair an industry panel on international publishing. Actually, I think she might have come to have fun at the conference as well. It was lovely to catch up with her. Discussions in the kitchen that evening included 'The woman we would all like to be when we grow up.' Joanna Lumley got that vote. Hugh Jackman and Alan Rickman got the votes for 'The men who ...'
Well, I'll leave that to your imagination. 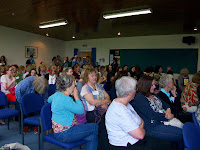 Saturday kicked off for me with Talli Roland's talk about on-line marketing. That girl is a phenomenon. I took notes. Now I just have to put them into practice ...
I was one of the next panel, talking to members of the New Writers' Scheme. I hope we managed to be encouraging and informative. Lunch was lasagna and I indulged in trifle afterwards. Louise, Linda, Lynne and Liz talked about writing co-operatively - which included collaboration, contributing books to series, and ghost writing. I don't think I ever want to do it - it sounds far too complicated - but it was fascinating to hear how it worked.
Moira Briggs from Vulpes Libres has a dry sense of humour, much in evidence as she talked about blogging and book reviews. In the last session the team from MIRA brought everyone up to speed on what they are looking for. And then it was the GALA dinner. Juliet Greenwood has posted pictures on Facebook of the excellent food. The outfits were spectacular (especially Rhoda Baxter, in a beautiful sari), the conversation even better.The noise level was deafening. Kitchen conversation later  included Jane's encounters with a bat and a black cockerel - and it's not what you're thinking.

I was proud to be up in time on Sunday for the 9am 'hangover' slot. Jane Wenham Jones surveyed the highlights of her career to date. Like the other Jane, the one from the war time cartoon, she's an expert in losing her clothes. She also had advice on how to be photographed to avoid the dreaded 'sumo wrestler arms'. Hands on hip, plenty of white space between arms and body, tummy in, chest out, chin up. Now I have to put that into practice too. Failing miserable so far, if the photographic evidence from the conference is anything to go by. RNA Chairman Anne Ashurst gave an inspiring presentation on handling the back story, and then it was the last session - a round table discussion for published authors. And yes, the subject of 50 Shades of Grey did occur in the conversation ...

I had a great time. Next year it's Sheffield. Have they been warned?
Posted by Evonne Wareham at 04:30 12 comments:

Have Love, Will Travel

Would you travel half across the world, to be with the man you loved?

A couple of weeks ago the Vale of Glamorgan had a wartime re-enactment weekend. In particular it was a celebration of the American soldiers who came through the port of Barry on their way to and from the Continent in the final stages of the Second World War. A plaque was unveiled, marking the event.

Last Saturday my mother's younger sister celebrated her ninetieth birthday. They did not spend the day together, because my mother is here in the UK, and my aunt is in the United States. She was one of the young girls, the G.I. Brides, who married one of those American soldiers and followed him across the Atlantic to begin a whole new life. She'd known him eight weeks.

Hundreds of women made the same sea crossing that she did, at a time when trans-Atlantic travel was unusual and expensive, to set up home with a man they barely knew, in an unknown country. There were undoubtedly some, either naive or opportunist, who expected everything to be as it was in the Hollywood movies that brightened the grim days of the war. The majority were ordinary women, who'd met the man of their dreams, who happened to have a different uniform, a different accent, a different nationality.

These days a trip to New York or Las Vegas is something to do over a long weekend - just hop on a plane, and go. Keeping in touch is a matter of lifting the phone, or sending an e-mail. Many of those brides faced the possibility that they would never again see their families, or the place where they grew up. Their parents would grow old without them, friends and siblings would go on with very different lives, the only connection the flimsy blue form of the weekly airmail letter.

They were brave, crazy  - and in love.

That's the spirit that every romance writer wants in her heroine - love beyond reason.

Magic, the stuff of dreams. 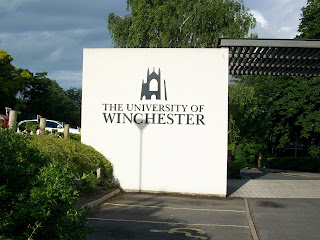 Last week I was just about to have lunch. A wide selection of salads, with donuts or Danish pastries for pudding, if you're wondering. I sat next to romance writer Allie Spencer's mum. I've not met Allie, but she is a previous winner of the Joan Hessayan Award - I can look for her name on the trophy, when I get it back. Despite the dreadful weather that hit so many places over that weekend, Winchester luck produced sufficient sunshine for the familiar sight of attendees sitting on steps and terraces during the breaks. Sitting on them is one thing - climbing them to go from one session to the next is quite another matter. Most of my sessions seemed to involved a long walk and a stiff climb. The first after lunch was no exception, when Lorna Fergusson from Fictionfire looked at opening lines and what made a memorable one. I'm big on opening lines - probably something to do with the American Title contest where one of the elimination rounds was based on your first line. Concentrates the mind quite a bit. I learned a lot from that contest.

John Appleton's hour on What Works and Why went by very fast, looking at ingredients that might catch the eye of an agent or editor - good, professional presentation was a given - but a successful manuscript has to sell itself to every department in a publishing house - something about it has to be distinctive and capable of being summed up as succinctly as possible.(In other words, the dreaded elevator pitch.)  The author needs to make sure that any special credentials for writing that particular story are front and centre in the covering letter. Everyone hated writing a synopsis, but John reassured us that making an effort to produce a good one, not too long, but comprehensive, was not time wasted, as they were read.

My next and last session of the day was just a few doors along the corridor, but before that it was afternoon tea break. And if I wanted tea - yes, you've guessed it - over to The Stripe, and up and down those steps again. I arrived to find a mini mutiny - the urns had run out and there was no cake. Happily the caterers  soon redeemed themselves with replenished tea supplies and large trays of cake of every kind. I'm still regretting that I didn't snaffle a piece of the cherry sponge as well as the fruit cake. A quick inspection of the bookstall confirmed that the pile of copies of Never Coming Home was decreasing. During the day I'd had such a lot of good feedback about my few minutes at the Plenary and now people were buying the book! If you were one of them, I hope you enjoy it. And please tell your friends.

The final session was with Sally Tickner, from Publishing Gateway, talking about creating an author platform - building a brand, developing your social networks - and more about book trailers. I'm going to have to have a go at that. Fascinating stuff, and in the audience I also met Lou, who is one of the Choc-lit tasting panel. We established that she'd not test-read one of my books - the panel get the submissions anonymously - but she might well be given one of mine in the future. Lou was a finalist in one of the competitions for children's fiction and was off at the end of the session to the awards ceremony, which I believe involved a well deserved glass of wine. The results are now up on the conference website and Lou was amongst the highly commended. Hurrah!


I went off to town, in search of some dinner.

I had a really good time. The sessions I attended were my choices out of a huge range of options that cover everything from poetry to screen writing. Deciding is hard, as I invariably want to do at least two things at the same time - and I don't have Alan Titchmarsh's ability to be in two places at once :) Many one-to one interviews took place. The upstairs room in The Stripe was buzzing throughout the day. Will a new writer be discovered as a result of the 32nd Winchester Writers' conference? Will there be more than one?

... to Janet Gover for making Never Coming Home one of her recommended reads.
www.janetgover.com

Posted by Evonne Wareham at 20:37 No comments: