My irregular series of things that 'inspire' me. Today, it's people.
It's usual for a published book to include a disclaimer, somewhere in the initial pages, to the effect that no character in it is based on any person, living or dead.  (Except when it's obvious, like Napoleon, or Queen Victoria).  Yet is still fairly common for readers to assume that books rely heavily on portraits of people the author knows, and that if anyone who is acquainted with a writer stands still long enough, they are in danger of being included in a book.

I love people. I find them a constant source of inspiration and entertainment, but I will say now categorically and out loud that no character in any of my books has ever been based on someone I know.  Apart from being too scared that they might recognise themselves and take umbrage, I actually find the people wandering around in my head are a lot more useful when it comes to writing -- they do as they're told.  Most of the time.

Writing romantic thrillers usually means producing larger-than-life characters, or ones who are undergoing some sort of extreme event or emotional challenge -- not the sort of thing you meet on the high street.  My characters turn up, with their own history, inside my head.  (And what does that say about the inside of my head?)

My books are basically about emotions ... two people falling in love and fighting danger.  Or possibly fighting  love and falling in danger.  And my characters have to have the special skills and emotional makeup to deal with whatever I've thrown at them.  Which does not mean that I'm not a compulsive people watcher and eavesdropper.  People-watching, for me, is mostly about body language and movement, that little gesture that signifies love, fear, tiredness, confusion. The way a woman fingers the chain around her neck, or the sequence of moves a man makes when removing a motorcycle helmet.  Those are the things that are likely to end up in a book, not a portrait or caricature of a person that I know.

And listening to people talk?  I do that for the speech patterns.  I've a particular thing about the rhythm of a sentence (too much time in the theatre, listening to Shakespeare?), I tend to read what I've written out aloud to check not so much how it sounds, as how it balances.  It's a difficult one to explain, except that sometimes the sentence has too many words and sometimes too few, which has nothing to do with what is being said.  Speech patterns are important too.  I write a lot of dialogue and it's a good idea that everyone does not sound the same -- so expressions and accent are useful in marking people out.  As they grow, characters get a vocabulary of their own, and I discover their favourite words -- if things are going well.

So that's the sort of inspiration I get from people. They never get lifted whole, to inhabit my books. Romantic thrillers are escapism, a variety of fantasy -- I hope my characters act and speak like real people, but they're not based on real people.  It's far more fun to make up my own.
Posted by Evonne Wareham at 06:30 No comments:

On location - Out of Sight Out of Mind

The location of my books is important to me. The setting is an essential part of the feel of the story. It may not always be geographically exact - the demands of the plot have to be met, so things get invented on a regular basis - but the atmosphere of a place is what matters. In order to share some of the locations for my debut novel, Never Coming Home, I created a location tour, featuring some key places in the book, with extra background on what they mean to me. You can find it at the top of the blog.

I intend to create a similar tour for Out of Sight Out of Mind and am currently assembling photographs. The book is set in London and Pembrokeshire, two very different locations. Until the tour goes live, I thought it might be good to say a little about the locations at this stage.

The book opens in one of the outer London boroughs - in Uxbridge - where I lived for a number of years. That was a while ago, and the place has changed quite a bit, and I proceeded to change it further. Specific buildings in the book, like the up-market apartments where Madison lives, are places I've created specially for the story - in keeping with what is there in real life, but not based on an existing place. I wanted a location that was London, but not in the centre and one where Madison's laboratory - also a figment of my imagination - could be created in an out-of-town setting - in this case, the Buckinghamshire countryside.

The second part of the book takes place in Wales, in Tenby and on the Pembrokeshire coast. Again the landmarks of Tenby, like the harbour and the castle are real, but specific locations, like the shop where Madison buys scented candles, are out of my imagination.

And then there are the beaches. I hope that anyone who knows that part of the world can identify with the atmosphere of the place. I wanted to re-created that, but I did not want to identify one particular beach or location too closely. Instead I've used what might be called a montage of elements from that part of the world. The reader is free to imagine Madison and Jay walking in the surf of a beach of their own choosing, or one out of their own imagination.

Many of my childhood holidays were spent around Tenby, and memories from those times have wound themselves into the book. There are miles of beautiful bays and inlets to chose from, but my father was a championship level sea fisherman, so visits always involved angling trips - and I have to say that the beaches that the fish seemed to prefer tended to be of the empty, wild and desolate type. As a child the presence of golden sand and ice cream was much more significant to me.

I like to set my books in warm, sunny places. In creating my 'essence of Pembrokeshire' I've leaned heavily on childhood memories of sunny days, and tried to re-create the feeling they invoked, but I was also able to call on a hint of that other, wilder side, when the plot demanded it. And there is one day in the book when the rain comes down in stair-rods, as only Welsh rain can. I remember those days too.

The Gayle Wilson Award of Excellence 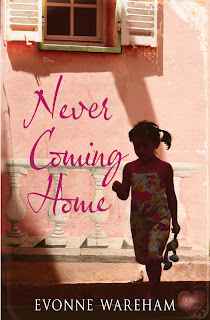 Although my debut novel Never Coming Home now has a new sibling, it hasn't retired to the background. I'm excited to announce that it is a finalist in the Gayle Wilson Award of Excellence contest 2013 - organised by the Southern Magic Chapter of the Romance Writers of America. A thrill and an honour.

Today I'm on Rhoda Baxter's blog - talking about books I've inherited and those I'd chose to pass on.

Drop in, if you can.

Posted by Evonne Wareham at 11:42 No comments:

Today I'm on the Romantic Novelists' Association blog - talking about writing romantic suspense and, of course, about Out of Sight Out of Mind.

And look what I got yesterday from my publisher, Choc Lit. 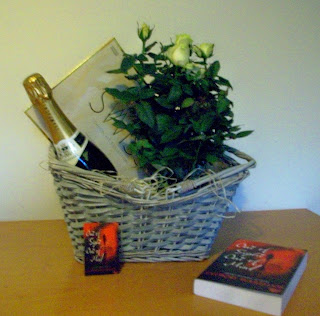 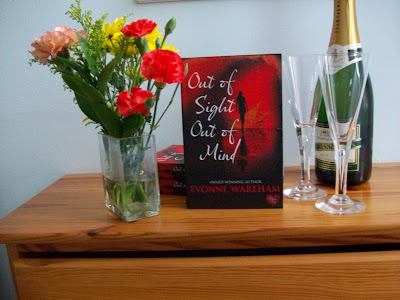 It seems to have been a long time coming, but it's finally here. Today is publication day for the paperback edition of  Out of Sight Out of Mind.

I'm celebrating with the Romaniacs - see you there.

http://theromaniacgroup.wordpress.com/2013/03/07/the-perils-of-paranormal-evonne-wareham/
Posted by Evonne Wareham at 10:25 No comments:

This is dedicated to ...

I'm always interested in the dedications at the front of a book.  A few lines, on the first page, when the author has the chance to offer the book to person or persons who are usually unknown to the reader, but who are significant in the author's life.  Occasionally these dedications are cryptic, sometimes they are poignant, now and then they clearly contain some sort of in-joke.  But in the overwhelming number of cases, they are written with love and gratitude.

When I wrote the dedications for Never Coming Home, it was easy to decide who the book was for -- my mother, and the close friends and family who have supported me throughout my attempts to become a published author. People who believed in me, and encouraged me, and picked me up and dusted me down, when the rejection letters came winging through the letterbox. (On a good day, with a prevailing wind, my postman can get a letter half way up the hall.)

In dedicating the second book, the choice was also easy --To my father who would have been  ....

Would have been, what?

The choice was easy.  The wording was much more difficult.  In the end I decided on 'To my father, who would have been astonished.'  And that's what appears on the title page of Out of Sight Out of Mind.  I'm pretty sure that what I've written is correct -- although I did have other 'a' words to choose from, 'astounded' and 'amazed' being two of them.  I don't think that it would ever have occurred to my Dad that anyone in his family might write and publish a book, and certainly not his daughter.  I hope he would have been proud of me, although it's difficult to know.  My Dad was one of the generation who, having come through the Second World War, kept their feelings pretty much to themselves.  Since he died I've been told, by several people, how proud he was of things I'd achieved in other parts of my life.  He never said a word to me.

I hope he'd like the idea that I've written a story that was an award winner.  And now followed it with a second book.  Whether I would have wanted him to read them?  Hah!  That is entirely another issue.  Out of Sight Out of Mind  is a thriller -- it has its share of skulduggery and dead bodies, but it is also a romance, and I  think it is a bit more romantic than Never Coming Home,  as many of the scenes take place just between Jay and Madison, and their growing relationship is an essential part of the plot.  And it's not just the romance...  There are love scenes  ... Definitely a no-go area as far as your father is concerned.  So no, I don't think I would have been comfortable with the idea of him reading it, although his capacity to surprise me was one of the things I most remember about him.  Maybe we would have astonished each other.  I like to think that.
He wasn't much of a reader, unless it was an angling magazine.  There is very little fishing in Out of Sight Out of Mind -- although a fisherman does have a very tiny cameo part -- literally a walk on.

That bit is especially for you, Dad.

The First Day of March

It's Saint David's day. The patron saint of Wales. 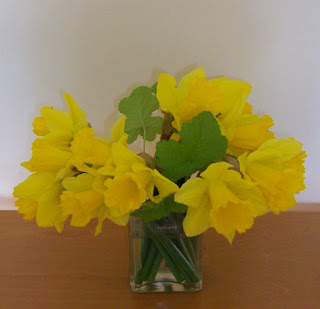 Greetings from Wales. Have a great day!
Posted by Evonne Wareham at 10:00 2 comments: