The Out of Sight Out of Mind Location Tour

Locations are quite important to my books, particularly the sense of atmosphere they convey. I write European set romantic suspense, and I like to use places I have visited, if I can. I also like to include at least one reference to Wales, where I was born and which will always be 'home'.
Out of Sight Out of Mind  is set in London and Pembrokeshire, in real locations and ones I have imagined. I lived in London for many years, so was able to include a few of my favourite places, and family holidays were spent in Pembrokeshire, so I have memories of happy times to draw on. In my memory it is a magical place of castles and beaches, with mostly sunny days but a few very wet ones. For the scenes in and around the town of Tenby it was that atmosphere I wanted to invoke, more than any specific location. My hero and heroine, Jay and Madison, go there to escape, to have some time out of time together, away from the very considerable pressures of the world surrounding them. I wanted that sense of an interlude in a beautiful setting, a kind of bubble where they are alone together against a hazy background of sand, sun and historic buildings.

But first things first. The book begins with their first encounter, in Uxbridge, which is an outer London borough, and where I used to live. A busy town, close to more rural Buckinghamshire, where Madison's laboratory is situated.


During this part of the book, Jay regularly takes long walks, trying to sort things out in his mind. One of his favourite routes takes in Uxbridge Common, which I snapped when there was a very deep frost.


When Jay does his walking it is later in the year and the weather is a little better! 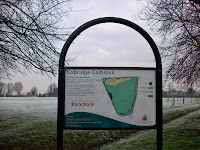 There is an interlude when Madison and Jay go on a trip to central London.
The Royal Opera House and Covent Garden are two of the places they visit. I'm very fond of this area of London. I was living there when the market opened as a site for shops and stalls, rather than fruit and veg. There is always something new to see and people to watch, from buskers to shoppers. Plus the quirky stalls to explore, often staffed by the craftspeople who make the items on display.

In the Pembrokeshire part of the book, apart from some of the landmarks in the town of Tenby, I have not identified any particular locations. Tenby town is a warren of small streets and alley ways, surrounded by beaches. Parts of the town walls still stand and there is a small harbour, where boats offer trips to Caldy Island and fishing expeditions. The restaurants and shops mentioned in the book are my own inventions, but I hope I have given them the right 'atmosphere' for a small and bustling seaside town at the start of the holiday season. The big landmarks, like the Town Walls and the Castle, are real.

Madison's cottage and the area around it are strictly my own creation, although I am sure you would be able to find many that share similar features in the area. For the beaches that are mentioned, I created them to suit the story and the reader is free to imagine their own particular favourite, either in Pembrokeshire or somewhere else.

I know that some of the scenes in my mind's eye owed a lot to my 'own' beaches, at Barry Island and The Knap, as much as memories of Pembrokeshire. But hey, this is romance, you're free to provide your own scenery. That's part of the fun.


Wales is apparently unique in the world, being the only country with a walk-able path around its entire coastline - there are many and varied beaches to explore, and if you visit you'll be sure to find one you particularly love.

The book ends back in London, and again the locations are of my own imagination.

And of course, the very last scene ...