Rambling around the further reaches of the blog and looking at old posts, I found this one on a perennial subject - the setting of books. It also talks about one of my great influences - Mary Stewart. In the current grey end-of-January weather, I thought it would be good to give it another airing.

Location. Location. LocationWhenever romance authors get together and begin talking about early influences on their writing, the name Mary Stewart invariably comes up, particularly amongst those who write romantic suspense. Her books have the classic ingredients - ambiguous alpha hero, who may be a good guy, or maybe not, independent heroines who are more than a match for the tough guy and European settings which, at the time they were written, must have seemed impossibly exotic - the Greek Islands, the south of France, Austria, Spain, the Isle of Skye (before they built the road). The impact on readers in post war Britain, ten years after the war, but with rationing only just ended and the package holiday still many years into the future was surely exactly what a good romance novel must be - an escape into another world. And location is still a key ingredient in books and films. Reviews of so many books talk of the location as a character in its own right. Films like The Tourist have ravishing settings - in that case Venice - which give the stars a run for their money in drool appeal. (Although I must say that a cameo appearance by Rufus Sewell brightened the screen considerably for me, and diverted me from rampant palazzo envy.)I still like books which take me to places I consider to be glamorous - with plenty of sunshine please. And those are the books I like to write. Being in a foreign place is an added layer to the uncertainty felt by the hero and heroine - essential stuff for thrillers/suspense. And it throws them together - essential stuff for the romance. And I get to enjoy the sunshine, even if it is only in my head.It wasn't until I began thinking about this piece that I realised how much my teenage reading of Mary Stewart had shaped what I now like to write. The power of early influence?  All the ingredients are there - particularly the settings.
Posted by Evonne Wareham at 08:00 No comments:

The delight of too many commas.

Writing up a PhD calls for a complete change of my writing style, or maybe a return to my academic style?

When I'm writing fiction I go for short sentences, and paragraphs - one line is not unknown. Lots of dashes and ellipses, a complete disregard for the rule that says you never start a sentence with 'And', 'But' or 'Because' - although I do try to steer clear of ending with a preposition. I was brought up, right, me.

My academic style is another thing entirely. Loooong sentences. Hello subordinate clause - haven't seen you in  a while. Commas, including Oxford, (although I think I put them in the fiction too) colons and semi colons! Liberal use of 'however' and 'therefore' and the occasional 'nevertheless'. Not used 'hertofore' yet, but I have hopes. Many Many Capital Letters. As my topic is WWII this is staying in period, as they were very fond of Capital Letters.

I still have the dashes and the paragraphs are still fairly short. I do have one or two one liners, but I expect they will come out in the edit. (Do you edit a PhD?)

Actually it's quite fun, weaving around all those commas and clauses and trying to make the stuff sound important. I think the word is 'verbose'.

Hope it doesn't stay with me when I finally get back to writing fiction again though.
Posted by Evonne Wareham at 08:00 No comments: 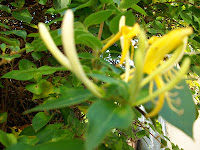 At this time of the year, with the weather mostly grey and a long slog of the day job still ahead, I'm not at my best. A time for appreciating some simple pleasures. I don't have time to spare for complicated ones!
So: -


Not a long list, but one to be grateful for.
One of those recommendations you get for the start of a new year is keeping a gratitude diary. I don't have one of those, but the blog is a good substitute. I won't be doing it every day though!
Posted by Evonne Wareham at 08:00 No comments:

Writers' Block is fairly well known - when a writer finds he/she cannot write for some reason. At the moment I appear to have whatever the opposite is - Writers' Avalanche?

I have ideas coming from all directions and none of them have any hope of being written in the foreseeable future, because, you guessed it - the day job. Until the thesis is finished I won't be writing anything that doesn't have lots of  'howevers' and 'It should be noted ...' and footnotes in it. And that won't be stopping until August.

I suspect that the aforementioned avalanche is my mind playing tricks with me - because it knows it is quite safe from having to deliver on any of this stuff, it is wandering around having the most tantalising fun it can think of. As a result, I have:

Regency assassins, including a lady poisoner. And don't anyone mention that I don't actually write historicals

A contemporary series about a shadowy security agency - to be fair, that one has been knocking on the door for some time. One of the episodes is partially written.

Another contemporary series about female friends setting up businesses in a small town - no suspense in that one. I may have a few pages of that, courtesy of a retreat day that the Welsh RNA Chapter held before Xmas. Well I had to write something, didn't I? And I really did not want to take the thesis. It was meant to be a day away from the thesis, and it worked - except I now have this new series ...

Another contemporary of a group of strangers thrown together on a package holiday. That doesn't have any dead bodies in it yet, but the plot is yet young ...

Something with clowns, because I snuck off for a day out over Christmas to the Clown Exhibitions at the Art Gallery on Bristol. I am now waiting for that idea to surface.

I have a horrible feeling that when I am finally free, all these ideas will evaporate like mist in the morning. Even so, I have at least three more of the Riviera series to go, some of them in various states of being written. And there are two stand alone contemporaries, partly done, one featuring second time around lovers, with added serial killers. I also have a partial of a mildly supernatural that has two romances and three separate villains. And there is that old manuscript that i uncovered the other day and started to wonder about un-picking ...

The brain is a wonderful thing - but right now mine is supposed to be focused on the day job. 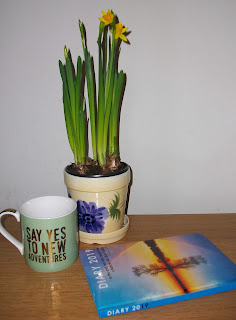 Well, the first question is - where did 2018 go? It only seems five minutes since it was New Year's Eve last year!

One way or another 2019 is going to be a big year - and that has nothing to do with politics, I hasten to add. The day job, a.k.a the PhD, has to be completed, so that is the first priority. Actually, it's the only priority. At the moment the thing is a MESS, but I am working on it. I hope it will get better, soon.

Once that is off my hands, and it will not be until August, I'm afraid, I can get back to some writing again, which will be a relief, as I have sooooo many books all lined up and demanding to be written. I think it is a plot, or a trick of the mind, or something. As I know there is no hope of writing any of them now, they are buzzing around like bees on a buddleia, Enough for about the next twenty years or so. Once the day job is finally wrapped up, all of them will be off into the sunset, I bet you. Won't see the little blighters for dust. All there will be is a pile of obscure post-it notes that don't make sense. I bet that too.

I don't do resolutions - all those more or lesses - you know, eat less, exercise more. I do have hopes though. And there is something about a brand new year.

Potential, and maybe just a shiver of excitement? Possibilities?

Time for that classic writer's question - What if?

New adventures? Maybe. I don't have plans - 'cos PhD, but it would be nice to do some new things this year, even, just maybe, have a proper holiday?

Who knows? Except that before you know it another new year will be rolling around?

Make the most of this one.