My mother does not often travel very far from home these days, but with some trepidation we decided we'd make the trip to London for the RNA Party and the Joan Hessayon Award. Travelling with her by train is rather like a royal progress, as we have assistance at the stations. She jibbed a bit over the wheelchair at Cardiff, but was very happy with the golf buggy which buzzed us around Paddington in fine style. My role in all this? Lady in Waiting and Keeper of the Luggage. A big thank you to all the taxi drivers we met on our travels, who were unfailingly helpful. (They even overlooked the balloons that accompanied several journeys.) 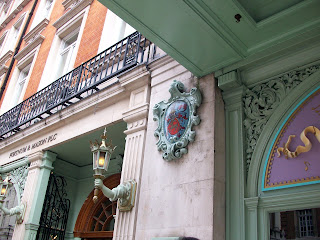 On the day of the party we had tea with two thirds of my cheer leading team at Fortnum and Masons - in the Diamond Jubilee Tea Salon, re-named after the Queen visited on St David's Day with the two duchesses. Crust less sandwiches, scones and four kinds of jam, small cakes (the eclairs flavoured with rose water!!!!!) the run of the large cake trolley and a pianist. Heaven.
Then to the party at the Royal Over-seas League. Can you see the royal theme emerging here? A lot of people have blogged about that, and I've put some more pictures in a gallery in the previous post. High spot for mum, apart from me winning the Award, which was a total shock, was meeting Anna Jacobs, who is her favourite author. Thanks Anna for appearing in the photo. 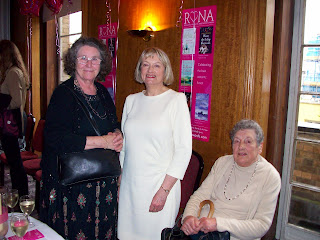 The next day it was a noisy lunch with almost all the Choc-Lit authors (Henri, you were missed) and various of their family members and the Choc-lit team. The Pizza Express in the Strand has got used to us now. Not sure if they offer the staff danger money. That evening I left Mum with the hotel TV and sloped off to The Duchess of Malfi at the Old Vic. It was excellent. Watching the protracted strangling scene confirmed where a lot of my darker writing impulses come from. The character of Bosola, the assassin, is an enigma. I've always felt that he is in love with the Duchess and the long look they exchanged as she died seemed to confirm this. But then, I'm a romantic novelist. I would think that, wouldn't I?
Posted by Evonne Wareham at 08:34