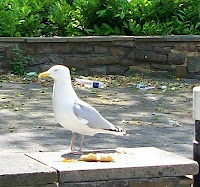 Apparently, Cardiff has the largest population of seagulls in the world.  Yes, I know what you're thinking, the same as me.  How do they know?  They are certainly a feature of life, if you live on the coast.  They’ve even earned honourable mention on my website, as the soundtrack to walks on the beach.  The sight of the birds gliding in the air currents and the haunting cry when they are flying is high on the list of favourite evocative sights and sounds.  When you live with them though, you learn about their other habits, and I'm not just talking about mess on the washing.  Those fierce bills make short work of black rubbish sacks, and their persistent cawing when they are displeased or defending their nests is a long way from the call when they are flying.  Unfortunately, that is the noise you hear the most if you have them inhabiting your chimney pots.  It’s a work of art too, to watch one unpack a whole litter bin, to get to the half eaten sandwich at the bottom.  They must have a really acute sense of smell. 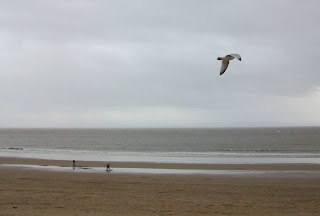 Then there are the babies.  I never realized that they have juvenile plumage that is completely different from the adult bird -- speckled brown and white, and a thin piping cry that lets you know when you have a new arrival on the roof.  They are very funny to watch when they are learning to fly, running along flapping their wings and jumping like a lot of small boys holding their arms out and pretending to be aeroplanes.  I remember a few summers ago, when one of the babies ran a little too far, while experimenting, and  fell off the roof. Or it may be that pushing the adolescent out into the world is part of the growing up process?  Maybe mum was just fed up with having a stroppy teenager around, eating her out of nest and chimney pot.  Baby wandered about in the street for a couple of days, anxiously watched over by the occupants of at least 20 houses, until he got the idea of what his wings were for.  Mum and Dad patrolled diligently to see off any threats. (Yes -- male seagulls seem to be wings-on parents).  Then one day he got the hang of it, and was off.  I think that similar experiences may be the origins of alarming stories of people being attacked by gulls in their gardens.  Luckily we’ve never experienced that. The noise they make is enough to keep me away from any errant offspring.
But when the sky is blue, and cloudless, sitting watching the gulls floating on air currents, that’s one of life's simple pleasures.
Posted by Evonne Wareham at 01:00