Not quite your conventional castle 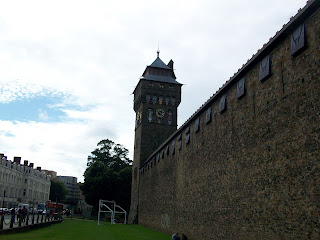 Cardiff Castle has been around since Roman times. It's seen some action, through the years, right up to the air raid shelters that were constructed at the base of the walls for use in the Second World War. It's a landmark in central Cardiff, at the end of the main shopping street, and a tourist attraction.

It has all the usual things on a check-list for a castle - thick walls, turrets, a keep - but it is also a huge and amazing example of a Victorian folly, created by the architect and designer William Burges for a nobleman who at the time was reputed to be the richest man on earth.

The interior is a heavily decorated Gothic masterpiece - or monstrosity, depending on your taste. Rooms painted with medieval scenes, knights and ladies, myths, flowers, foliage - carved furniture, a table built to accommodate a whole grapevine ...


Outside there is less of the folly to be seen, just the tower, with its highly coloured embellishments ... and the animal wall. When I was little, whenever we went to Cardiff, my grandmother would take me to see the animals. I loved it. Looking at it now, it's a wonder that I didn't get nightmares, as the birds and beasts are all pretty ferocious, strange or exotic. Or all three. Bears, lions, monkeys, a vulture, a pelican, what I think is a leopard, an ant eater ... Actually, he is rather cute, with his nice new nose. 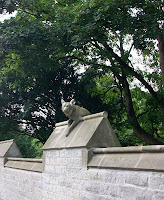 Over the years the wall fell into a poor state of repair and the animals were looking very sad and sorry for themselves, but renovations have recently been done and they are back at work, clambering over the wall, intimidating passers by. I could never decide whether they were escaping from some sort of stone menagerie in the castle grounds, or whether they had been magically turned to
stone as they climbed. 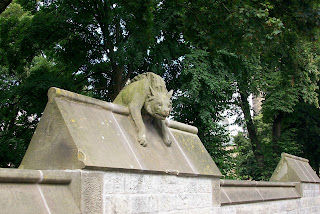 I've never seen anything quite like it anywhere else and I don't know why it was created.

But that's a folly for you. It doesn't have to make sense.
It just is.