Are you going to eat that?

One of the things I always find interesting in a book is what the characters eat.  Food and drink are a big part of hospitality and social interaction all over the world, and as books are usually about people getting to know each other and getting on with each other, food and drink play a part.  Some authors make a real thing of it, including recipes in the books.  Choc-lit authors of course have a special affinity with chocolate, so that many a hero has been matched with a perfect chocolate bar  A number of writers will tell you about books that have degenerated into a series of cups of tea and coffee, where every exchange involves some sort drink, but that is art imitating life -- when you think about it, most meetings with friends and family usually involve some sort of eating or drinking.

But what has all this to do with the play The Judas Kiss, now running in the West End? Well - one of my pet hates is scenes where food goes to waste. How often does a book contain a scene where the hero and heroine go out for a deal-breaking meal -- you know the set up -- expensive restaurant, soft lights, hovering waiters -- she is expecting a proposal, he is telling her that they are breaking up . Or one of them is moving to Australia, has a terminal illness, has just discovered he's about to go bankrupt, and has to break the news.  As a result, whatever food they’ve ordered goes to waste.  I hate waste, and I'm afraid I'm often to be found yelling, 'Couldn't you have told him/her that before you ordered?'

As so many of these kind of real life transactions do take place over a meal, it's inevitable that books will reflect this.  And although I hate it, I've done it myself.  If you have to find something to bring your hero and heroine together, and provide a setting other than just the need to talk, then across the table is high on the list.  Which is how I found myself ordering lunch for Devlin and Kaz, in Never Coming Home, and then realising that, as she is telling him about the loss of her daughter, she is never going to be able to eat it.  I did slightly let myself off the hook -- I only ordered her a salad to pick at, which seemed less wasteful than a hot meal.  Counting up, they have two lunches, one dinner and two breakfasts that I've recorded in detail, plus a memorable coffee on a lightning trip to Cardiff, when Kaz learns a piece of information that changes the way she looks at herself and the way she interprets the past.  When you're writing, you can never get away from food and drink. 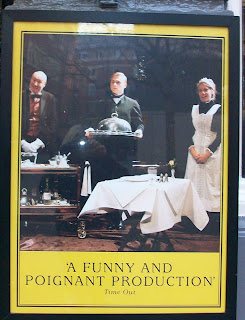 What about Out of Sight Out of Mind? Well in that book the characters always seem to be having breakfast. Madison, the heroine, is not particularly interested in cooking, but she does produce a very good fry-up - so there is a breakfast scene quite early in the novel. You'll have to read the book to find out how it comes about.

And The Judas Kiss? It has had excellent reviews and Rupert Everett inhabits the role of Oscar Wilde superbly. When I saw it in Bath, on its pre-London run, I enjoyed it. But yes - there was a scene where food was served and I spent half an act wondering if anyone was going to eat the specially ordered lobster that had been cooked for Oscar in his hotel suite, the night before his arrest. I nearly disgraced myself by cheering when it was finally consumed and I was able to settle down and enjoy the rest of the play.