One of the best things about an event like Thrillerfest is the people you meet - readers, aspiring authors, big names. An especial attraction for me was being able to spend time with leading authors in the romantic suspense genre, writers like prolific talent Heather Graham and Thriller Award nominee Alison Brennan, who are not as well known over here as I  think they deserve. Where ever you happen to be there is always someone interesting to talk to. Thrillerfest authors cover every field you might imagine - from  books about FBI profilers to eco-crime. It was good to see friends too, like Meg Gardiner, who gave me a lovely cover quote for my first book. One of the big features of the event is a breakfast with debut authors who have made it into print in the past year. One of these was Elizabeth Heiter, a fellow member of the Romance Writer's of America Romantic Suspense chapter, appropriately entitled the Kiss of Death. Her debut is out now and she will have six further books out in the next year - an output to swoon over. And the breakfast where we met the debutantes was good too - bacon, eggs, muffins, fresh fruit ...

And then back to the panels. I picked one on conflict overload. And the message I took from that one? Fear is more potent than descriptions of physical damage. Of course I had to be at the panel on building sexual tension. I write romance! My message from that? Sex should complicate things. (Believe me it does - and that is soooo much fun to write.) A panel of legal thriller writers arguing over sticking to the facts diverted me enough that I didn't take any notes, and one on techniques to get your readers invested in your book from the get-go produced a number of ideas - my favourite being 'Figure out what the chase is and cut to it.' 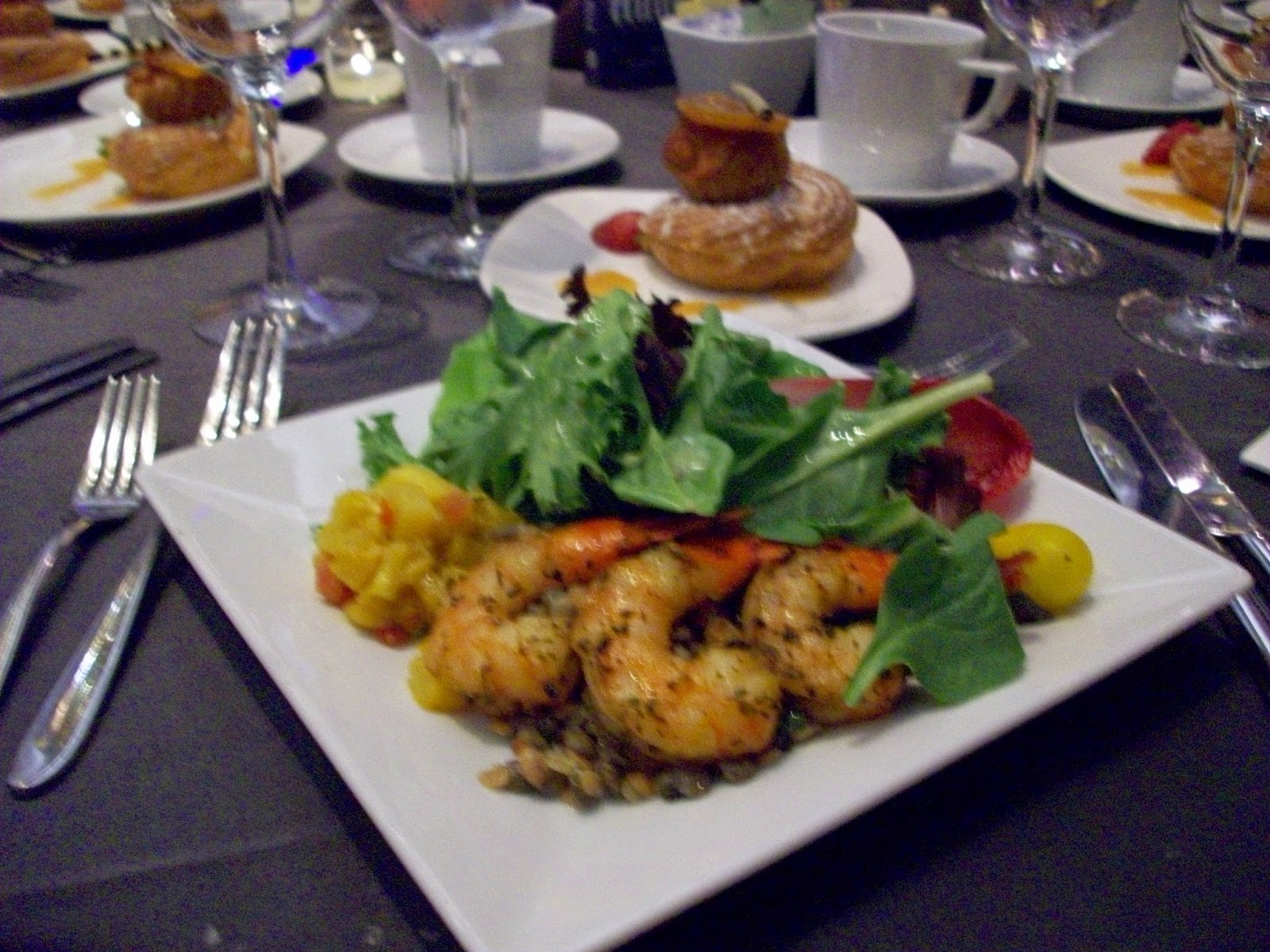 And then it was nearly over - brought to a fabulous close by the gala cocktail party, a delicious gala dinner - including the announcement of the 2014 Thriller Awards - and the after-party. I know taking a picture of what you are about to eat is becoming a joke, but I really couldn't resist a snap of the prawn starter and the choux pastry dessert in the background. And in between there was steak. A distinct change for the usual chicken or salmon at this kind of event. And then I had to coax all my party clothes and shopping into my suitcase for a short trip to New Jersey and some time with the American branch of the family. Thrillerfest was an experience I'd like to repeat. I don't think I'll be able to do it next year - the bank manager wouldn't like it - but, as the saying goes. 'I will be back.'
Posted by Evonne Wareham at 07:00