A tribute - and an explanation.

Early in the morning of 19th September I said goodnight to my mother for the last time. Today is her funeral. The final goodbye. It is going to be a hard day, but thanks to love and support from friends, I am going to make it through. I know that the mother/daughter relationship can be a difficult one - but ours was one of the good ones. Which is not to say that we are/were not both independent, opinionated, bossy women. The apple does not fall far from the tree. She was fiercely self sufficient, living alone for 25 years after the death of my father, until the last few months, when progressive ill health began to take its toll. She was my biggest supporter and always believed that I could achieve ANYTHING. And of course, because of that belief, sometimes I could.

I've assembled some photographs which I hope will be a small tribute to her. They seem to have a theme - which actually does not surprise me. Her greatest love (after my father and myself - I hope!) was her trade. She was a dressmaker. She has made me countless outfits over the years. The last was a pair of trousers  - the ones with birds on, for those who have seen me wearing them. She  was always learning. The last dress she made me was for the ball at The Romantic Times Book Lovers Convention in Kansas City in 2013. She'd never worked on sequin covered lace before, but the dress turned out a dream. She was then 93 years old. In her head she was still 18.

And now for the explanation. I have not said much up to now about what has taken me away from work, except for hints of personal issues. In the past few years my mother suffered an escalating series of health crises which left her increasingly frail and in need of care. - which is why there has been no new book and no PhD. Everyone has been very understanding - although the characters in the books who were demanding to be written - maybe not so much. At the moment all the books have fled and the studies remain simply a pile of notes. I hope that I will gradually get them back. At present I am very tired. I also have health issues of my own to face, so it may be a while. I desperately want to write and to study again. I want there to be a growing pile of books with my name on. I want to complete my doctorate.
I know she would encourage me all the way.
Now it is up to me to make it happen.

The top picture is her wedding day, showing off the back of her suit, modelled after Dior's New Look which was unveiled earlier that year. She made most of it, but my honorary Aunt Margaret made the sleeves as it was considered unlucky to make your own wedding dress.
The bottom picture is a mystery, she didn't remember having it taken, but we suspect that from her glamorous up-do her sister had a comb in it. My Auntie Glen was a hairdresser.


This was the first picture I took with my new camera. If I'd known it was going to be such a lovely one of her, I'd have moved the washing out of the way.

The last dress, which left a trail of sequins over both our houses, but was worth it. I'm looking forward to one day having an occasion to wear it again. 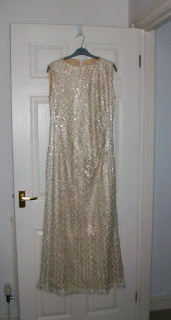