Swotting up on Shakespeare. 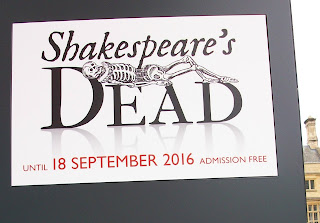 As it's the 400th anniversary of Shakespeare's death this year, as you would expect, there have been a lot of Bard-themed events going on. I've managed to get to two of the exhibitions - not for long, as being still convalescent I find can't stay on my feet for too long. But long enough. Both of them were libraries, both involved books - folios and first editions - the kind of thing that gives you a buzz, even behind glass. Well, it does me.

The first was at the British Library - one of my favourite haunts for the 'day job'. That one was all about Shakespeare in performance - photos and costumes as well as those books. A bit scary when I found that I'd actually seen more than one of the 'historic' performances on show. But I did start my love affair with Shakespeare at a very young age. My Mum said I was about three, and I take her word for it. It was on the TV and I think it was Julius Caesar - I was probably fascinated by all the men wearing bed sheets.

But I digress. The second exhibition was Shakespeare's Dead, in Oxford, all about, as you might have guessed, the ways in which Shakespeare handles the portrayal of death and it's prevalence in the plays, even the comedies. As you can imagine, as I have a tendency towards littering the scene with corpses in my own literary efforts, I was especially drawn to that one. My most recent work - and there has been some recent work, I'm glad to say - has been much lighter stuff, but I'm beginning to hanker after something with a Jacobean body count again. So that's a watch this space moment. And I really enjoyed that Oxford exhibition - ideas to think about. I've always wanted to write a modern revenge plot. It's not happened yet, but it will, I'm sure.

And what about something with all those ghosts ...
Posted by Evonne Wareham at 07:30