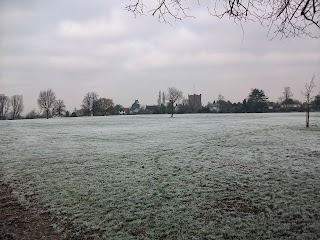 As I mentioned the week before last, I have what might become a new novella in the works. A Christmas novella. (Don't panic, it will be next Christmas.) It began with a discussion on kidnapping over lunch that started off an idea, and as it was coming up to Christmas that seemed a good time to set it. (Atmosphere and all that.) And snow will be involved. Which is a bit of a surprise, as I do not like snow very much. But it will mean that I might get one of those pretty glittery snowy covers that Christmas books always have. I will try not to get bloodstains on it. As it is my hero who is getting kidnapped there had better not be any blood - or at least, not much.

So, I have a bit of a challenge going on. Romantic suspense is not generally the first thing you think of in relation to Christmas spirit. Cosy crime seems to get away with it, and ghost stories are part of the Christmas tradition, but thrillers? We're back to that body count again. I'm also determined that it will be a novella - 30,000 to 40,000 words, as I have other stuff I want to do, like getting back to a full length romantic suspense, not to mention the day job. But I'm wondering if that is enough for a thriller? I have a gut feeling that a true thriller takes a bit longer to develop. A novella? Too much menace too soon and it's horror, not enough and its crime rather than suspense?

Anyway. I am going to have a go. I have an interesting hero and heroine and a four year old, and a cat, and  a lot of snow, which is a surprise to them as it was to me.

And Devlin from Never Coming Home is going to make a cameo appearance.

And there is going to be a helicopter ...
Posted by Evonne Wareham at 07:30