You never expect the unexpected... 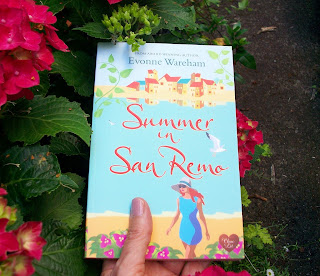 When Out of Sight Out of Mind came out as a paperback in 2013 I never imagined that it would be five year before I'd hold a paperback that I had written in my hand again.

Back then I was expecting there would in due course be another romantic suspense, and another, and another and Summer In San Remo was going to be a piece of frivolous nonsense - a distraction for the summer - what suspense writers do when they let their hair down.

Well, you all know how that turned out.

Yesterday Summer in San Remo came out as a paperback - and I really hope that it is NOT going to be another five year before that happens again!

It's not all bad though - in the interim the Riviera Rogues were born. I'd had such fun with Cassie and Jake that I didn't want to let them go. Their love story is done, but why couldn't there be other couples getting their happy ever after on the Riviera - and as Jake is the boss of a detective agency ...

So - there will be a series. At the moment it is moving at the pace of a sloth that is working to rule (Can you tell that I was a shop steward in a previous existence?)  but once the PhD is done - and it has to be written in the next few months - then all my creative time will be for my writing. More Riviera books and more romantic suspense.

Isn't that a scary thought?