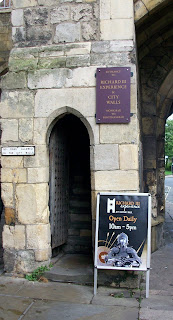 I made a trip to York last week - to have some fun, at the RNA Afternoon Tea, which was worth the six hour trip in itself, but I also wanted to complete a little piece of research. When I was last in York - probably about twenty years ago, we stumbled on a gatehouse in the city walls that had a small museum to Richard III. In one of the books that is half written and will be leaping back to life - I hope - once the day job is put to bed, the heroine reads a copy if JosephineTey's Daughter of Time (If you haven't read it you must)  and takes herself on a Richard III tour of the country. (I'm keeping her away from the hero at that point, so it has a purpose.) I did Bosworth and the new tomb and the car park and everything some time ago, but I wanted to complete it with the museum from York - which I was able to do, so now that is all taken care of and I only have to write the thing. It will probably only have a few lines in the book, but I wanted to visit all the places, for fun, as much as anything. You know about writers and research.


I had a fabulous time in York - it is a lovely city. I stayed in a quirky boutique hotel, which has fed some ideas into a similar hotel which will be in another book, in a new romantic suspense series. I found an original copy of a book by author Elizabeth Gouge in a shop in the Shambles and treated myself as a memento of the weekend. (One of the Romantic Novelists' Association competitions has a trophy in her honour.) The hotel had a large library/lounge with a wild and wonderful selection of books - including a copy of the Dictionary of National Biography for the period of World War Two, which I have been trying track down for details on the man who was the Regional Commissioner for Wales - so I was able to take notes on that.  On Saturday morning I watched a troupe of Border Morris
dancers, and chatted to one of them about the costume. Forget bells and hankies - the Border Morris involves tattered black coats, hats and feathers, cudgels and black faced make up - a traditional method of disguising identity - quite spine stirring. There is a Border Morrris in another book of that romantic suspense series - one of the heroes plays the fiddle for them. It was good to see a troupe in action. I was so busy watching I didn't take pics!

Then on Sunday I discovered Fairfax House, which is a glorious Georgian building fitted out with correct period furniture. It was amazing - and gave me two more bits of research - a spinet and a bureau with multiple secret drawers. That is for a Georgian romantic suspense series which I have partly started and want to return to. It is where the private security service that features in the contemporary series begins - a secret society of dangerous rakes and dandies. I really want to write that one too.

All in all York was tremendously inspiring. Now I just have to get to those books in waiting - the characters have started to line up, demanding to be written and I don't know how long I can hold them off.