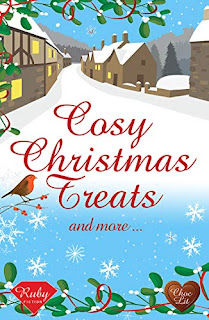 My publishers, Choc-lit, are known for their Christmas books and several have been published in the last few weeks, but there was one last surprise on the way - a volume of short stories and flash fiction from twenty of the Choc-lit and Ruby authors that was released on Monday. Many of the stories are Christmas themed, but there are other types as well. Some are new, some have appeared previously  in the publisher's newsletter. The e-book is available from Amazon, priced 77p, and the proceeds are going to Shelter. Buy HERE
I've got a little something in there - it's a treat the was published a few years ago when What Happens at Christmas was released. It's the very last one in the book. Set on Christmas day, based very loosely on a real life event and with a rather naughty ending!
Ruby author Jan Baynham has two completely new stories in the anthology and the second one gives us a glimpse of the kind of Christmas her characters from Her Mother's Secret might be spending. I've invited her on to the blog to tell us about the research she  did. Over to you, Jan:

When I was asked to write a short story for the Ruby and Choc Lit anthology, Cosy Christmas Treats, I began to wonder what Christmas would be like for my character Alexandra in Her Mother's Secret when she spent her first Christmas in Greece. The story entitled, Christmas Surprises on Péfka, is a stand-alone but those who have read my debut novel will know that most of the story is set on the fictional island off the Peloponnese.

In the past, the Greek people didn’t use Christmas trees to adorn their houses. An old and very traditional decoration is a shallow wooden bowl with a piece of wire dangling along the rim. On this wire hangs a small wooden cross with a sprig of basil wrapped around it. Once a day someone, usually the mother, dips the cross and basil into some holy water and uses it to sprinkle in each room of the house. This ritual is believed to keep the Kallikantzaroi, the Greek Christmas goblins, away from the house. While this is still the case throughout many regions, Christmas trees have been rising in popularity over the past few centuries. Over the years, the Christmas tree was integrated into the local culture and now the Greeks decorate fir trees in their homes and in squares

The Christmas season in Greece begins on December 6th, which is Saint Nikolaos day, and ends on January 6th with the Feast of the Epiphany. As this is a maritime country, the Greeks traditionally decorate boats for Christmas. This custom survives today in seaside towns and islands, where people decorate Christmas boats in the central squares. Saint Nikolaos is the patron saint of sailors and fishermen. It is said he worked hard to save sailors from the angry seas. Especially on the islands, you will see boats decorated with blue and white lights.

‘To the left of the quayside, she noticed a large sailing ship where the full sails were festooned with tiny lights sparkling like diamonds against the indigo sky as well as the hull of the ship and its tall mast at the top of which was an illuminated cross.’

On Christmas Eve, children often go out singing kalanda (carols) in the streets, travelling from house to house. They play drums and triangles as they sing. Sometimes, following a very old custom on the Greek islands, they carry model boats which are filled with nuts painted gold. If they sing well, they will be rewarded with nuts, sweets, dried figs and sometimes money

On Christmas Eve, too, it is traditional to bake Christ’s Bread, Christopsomo, ready to eat on Christmas day. It is a round, slightly sweet, light, buttery bread, infused with cinnamon, orange, and cloves. The top is decorated with a cross. A knife is never used to cut the bread as it is considered to be harmful to the good spirit that Christopsomo symbolises. Other traditional Christmas sweets are melomakarona, honey-dipped and often stuffed with nuts, and kourabiedes, dusted with powdered sugar and very white.

‘Plates of baklava and oblong shaped melomakarono covered in chopped walnuts were laid out on the work units, along with the customary Christopsomo, the special Christmas bread... The smell of cinnamon, oranges and cloves hung in the warm air.’

These are just a few of the many Christmas traditions I read about. The Greek people have so many interesting customs and traditions; it was fascinating for me to find out how some of those ancient traditions are celebrated alongside the new in modern Greece.

Kala Christouvenna. Merry Christmas to you all.

A big thank you, Evonne, for inviting me onto your blog.

Originally from mid-Wales, Jan lives in Cardiff with her husband. In October 2019, her first collection of short stories was published.  As well as writing shorts and flash fiction, she writes full length novels where she can explore her characters in further depth and delve more into their stories. Her books deal with family secrets and explore the bond between mothers and daughters. Set in the last year of the 60s, her debut novel, ‘Her Mother’s Secret’, takes you to sun-drenched Greece, her favourite holiday destination, and was published by Ruby Fiction in April 2020. This was followed by ‘Her Sister’s Secret’ in September 2020.

Having joined the Romantic Novelists Association in 2016, she values the friendship and support from other members and regularly attends conferences, workshops, talks and get togethers. She is co-organiser of  Cariad, her local RNA Chapter.

You may find out more about Jan here: