How may cups of coffee are too many?

Or - are my characters in danger of being over caffeinated?
It's a topic that writers occasionally discuss - not just coffee, but food in general. In real life many social interactions involve food and beverages - adult or otherwise. It's a part of life to be sociable and hospitable - meeting for drinks or a meal, offering guests refreshments - even business meetings usually involve a refreshment break. If you do all these and more in a week, it doesn't seem strange. Exhausting maybe, and bad for the waistline, but not strange. But in a novel? What would be normal in real life can slide into over use. I'm having this problem at the moment, because my characters always seem to be drinking coffee - which is in itself ironic as I rarely drink the stuff - I'm strictly a tea drinker. I do have five varieties currently in use, including a fruit tea and one that tastes of toffee. Somehow I can't envisage a hero who drinks tea. Hey, actually I can - I think the hero of the next book might be a tea drinker. The heroine thinks he's stuffy and snooty with a poker in an uncomfortable place, so drinking tea might suit him. He isn't, of course, but she and I are going to have fun finding that out. But I digress, as usual. 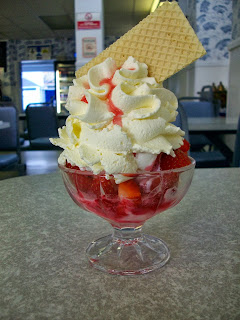 My characters like to eat. What a surprise! I always describe what they are eating as my mother gave orders that I should, because as a reader she liked to know. Always try and please the readers. For meals in the current book I am trying to serve things that would be local to the Riviera and Liguria. What people eat can also be a clue to character - back to that tea drinking. Actually I think Elliot would probably like that toffee tea - which means he has a sweet tooth. I can see that he's going to be one of those disgustingly lanky types who can eat chocolate and cream cakes and never put on weight. Many of my books feature ice cream, because I like ice cream, although the current one doesn't.
And you can be pretty sure in my books that any food around will get eaten. One of my pet hates as a reader is the scene where the characters are having a meal which is abandoned because of some big emotional drama. My dramas don't mean lost food. If you are going to emote, please step away from the table. Scenes where a meal is prepared and the intended recipients don't turn up are a no-no as well.  Waste not, want not?
None of this solves my coffee problem. I'm going to have to count them up and see what I can do. Substitute gin?
Posted by Evonne Wareham at 08:00