Putting yourself in your books.

Writing is a strange occupation. I've heard it described as telling lies for a living.  And all the stories/lies come out of you own head, which is even stranger. Disturbing when you are enjoying writing a villain. Perhaps even more disturbing when your characters take off and start doing things you never intended.

There's a classic joke - 'Be careful or I'll put you in my novel.'  I would never do that - too afraid of possible consequences - but I have noticed lately that I'm putting myself in my novels. Not as a character, but using specific memories and experiences.

I'm currently transferring the WIP from hand written to type written - a bit of a laborious process, although it is also the first rough edit, so it is useful. I've just transcribed a scene in and around Sloane Square in London, and I was struck by how much of my daily walk to work had influenced the scene in small ways. Re-reading it on Saturday took me back to the Square on a sunny day, the cafes and restaurants, the people, the shops, the entrance to the tube station. I know the geography of the square and the positioning of the zebra crossings is going to be significant for the plot in a future scene. It was nice to remember.

I've blogged previously about how  I used objects I've inherited in A Villa in Portofino - you can see a 'tour' of these in the special pages at the top of the blog. One object, or set of objects, in particular stands out - the postcards that my father must have brought home from his time serving in Italy during the Second World War. They are views of the major cities and some more obscure ones too. I know nothing about them as my parents were engaged before and after the war, but not during - long story - and Mum and I did not find them until we were sorting out things after he died.

Why did he keep them? 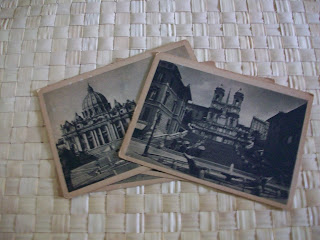 I'm guessing that it might have been accidental. You know how it is - you find a box, have a quick look through and then put it back where you found it, to be sorted out another day. And there is something about throwing away photos.

One of the things I wanted to explore in A Villa in Portofino was the idea of family 'secrets' that are not really secrets but have simply come down the generations only partially explained.

Those postcards formed the stepping stone into Megan's  mystery of the Italian poetry books. A small 'mystery' that the depths of the writer's mind embroidered into a completely different direction. You can get 'inspiration' from all kinds of places. Then your characters take it and run with it and that's how you get a book.