A day at the Eisteddfod ... with pink tents 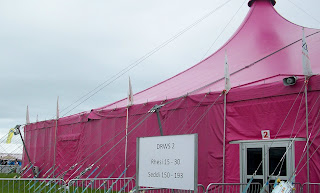 I've never been to a national Eisteddfod, but as it was taking place this year in the Vale of Glamorgan, the chance to get a brief experience of the event was too good to miss, even though I don't speak Welsh, the language in which the formal presentations and competitive elements are conducted.

The train ride was an adventure in itself - a journey I have not made in years, across the Harry Potter style viaduct and following the coast for much of the way, with glimpses of the sea. (Shame about the glimpse of the cement works, but you can't have every thing.) The transfer to the Maes, by special shuttle bus, was quicker than I expected. And then there it was, pink tents and all. And they were gorgeous - the most wonderful deep raspberry colour. What was going on inside them sounded pretty good too.

Everyone said it would be muddy - it was, but not impossibly so, if you were careful, and watched where you walked. There was a rainbow selection of patterned wellington boots being worn, and gravel and wood chippings had been put down to soak up the soggiest patches. I had a really good time simply wandering around, listening to Welsh being spoken, absorbing the atmosphere and looking at the various stands and stalls, which covered just about every organisation and activity in Wales that you could think of. There were lots of stalls selling crafts - I coveted some particularly lovely travel bags that mixed tapestry and leather. Many people were commenting that they had already started their Christmas shopping and one vendor had completely sold out of bunting embroidered with Nadolig Hapus (that's Happy Christmas, in Welsh). I particularly admired a stand of the most beautiful harps, all carved in different coloured woods. They were beautiful as objects, leaving aside the music. 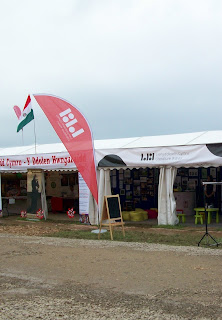 A murky morning turned into a glorious afternoon and when the sun came out, the temperature rocketed. A number of Welsh publishers had stands, and I think I visited them all - every kind of book you could wish for, from Welsh classics to coffee table editions with mouth watering photos of seascapes and old buildings. I dropped into the Literature Wales stand, where they were selling tickets for events later in the week, and also the large display from the Welsh Book Council, where I was pleased to see books by fellow members of the Romantic Novelists' Association, Leslie Cookman, Jane Wenham Jones and Juliet Greenwood, who all have Welsh publishers.
I came away with some shopping, a vast number of leaflets and booklets, which will keep me innocently amused for quite a while, and a warm glow from the sunshine and the experience of many people enjoying themselves. The number of coaches lined up along the road outside, from all parts of the Principality, testified to the popularity and enthusiasm for the event. The crowded station platform, when the train pulled in, caused amusement from local commuters who were alighting and exclaiming that they had rarely seen their station so busy.
A lovely day, and well worth the trip.