A darker kind of heart.

It’s Valentines day tomorrow. I expect you’re wondering about the poster for the play Tis Pity She's a Whore that I’ve selected to illustrate this post. 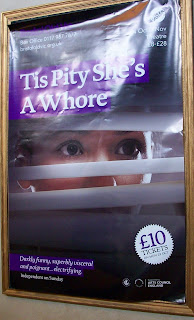 Well, it’s like this … I write romantic suspense, so frightening readers, as well as writing a love story, is part of the job. Last month I was talking about the heart as a symbol of love, and the celebration of St Dwynwen’s day. But the heart doesn't have to be about finding true love -- it can also have its dark side – I'm thinking of another symbol, a heart pierced by an arrow.  Maybe it's Cupid's arrow, but maybe it's not? And what about a heart pierced by a dagger, a motif often seen in traditional tattoos. A signifier of  heartbreak?

The heart is at the centre of being human -- you don't function long without one, unless you're a vampire -- so ripping the heart out of something is very much bringing it to an end.  A violent end.

I've been thinking about dark representations of the heart in plays and books. As you do. All right, as I do! One of my favourite Shakespeare quotations is from Much Ado About Nothing, where Beatrice, intent on revenge for her disgraced cousin, expresses the bloodthirsty wish to eat Claudio's heart in the marketplace.  It is a wonderful depiction of female frustration, grief and fury, one that many women might identify with.  Mary Stewart -- a romantic suspense author that many romance writers cite as an early influence -- takes that a gruesome step further in This Rough Magic -- I won't spoil it by saying any more, if you haven't read the book. It's one of those breathtaking moments when an author manages to horrify you and make you laugh, all at the same time.

And what about  Tis Pity  -- it's the blackest of Jacobean plays with the central theme of the passionate and unnatural love of a brother for his sister, and a blood drenched coup de theatre at the end.  My first recollection of seeing the play performed was at the National Theatre, in London. Rupert Graves (now playing Inspector Lestrade, in the Sherlock series) was Giovanni, the incestuous brother. My overwhelming image from the performance is of him crossing the stage, with his sister's heart on his dagger.  I was in the cheap seats, right in the front, and got the full benefit.  I knew it was probably only a sponge liberally dipped in stage blood, but it didn’t look like it.  My most recent experience of the play was a production by Cheek By Jowl, at the Bristol Old Vic, hence the poster.  Modern dress, with a distinctly vampire theme – a stunning production for the True Blood generation, which included Giovanni, mentally well past the point of no return, sitting on the bed, cradling his sister's bloody heart.  This one was even more realistic, but I knew it was coming, and it fitted so well with the performance of claustrophobic horror that it became part of the whole.  And maybe I’ve got older and more inured to these things?

So the heart isn't just a symbol of romance; it's got its black side too.

Happy St Valentine's Day, and I sincerely hope that any you receive on Thursday will be surrounded by love and flowers, not dripping down your arms.  Actually, that may have given me an idea …