Crimefest is the Bristol crime writing convention for authors and readers that now draws visitors from all over the globe. I've been attending, on and off, ever since it first began, as an overseas outing for the American crime conference, West Coast Crime. In that time I've moved from being a fan and an aspiring author to a published writer. But still a fan. This year I got to participate in a panel on Crime and Crossover, with other authors who add a bit of something else to the crime mix. In my case, of course, that's romance.

A look around the on-site book store which, like the convention, has grown year by year, points up the sheer variety of crime writing on offer. Why are we so fascinated by something that is inherently nasty, and not an experience you would ever court in real life? That's a big topic, and I'm certainly not qualified to get into deep water on that one. But evil actions do fascinate a great number of people. While I was still an aspiring author - and I was aspiring for years   - I noticed that all the manuscripts I produced had some sort of crime in them - which eventually set me on the trail to writing romantic suspense. Now I consider the crime element of the book to be a counterpoint to the love story. Throwing the protagonists together in a life threatening situation makes them more aware of each other and the attraction between them. It raises the stakes on the relationship and enhances the emotions. And yes, all right, it's exciting to write.

I had a great time in Bristol, meeting old friends and making new. The high point for me was listening to master plotter Robert Goddard, one of my great inspirations, but everyone I spoke to was in agreement that all the panels seemed to be better than ever this year. 2013 is going to be a hard act for the organisers to follow - but they'll manage it, I'm sure. 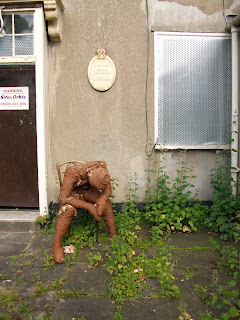 Authors are  always on the look out for unusual things. Strolling back through Bristol to the station I was diverted by the house in the photograph, marooned on a fragment of land between lines of traffic and obviously boarded up against vandals. I was attracted to approach by the plaque on the wall. On closer inspection it revealed that the poet Thomas Chatterton was born there. The somewhat bedraggled rope sculpture added a layer of strangeness. Chatterton, who died from poisoning at the age of seventeen, gets credit these days for being a precursor of the Romantic poets. I know the name best from the painting by Henry Wallis, who was an associate of the PreRaphaelite Brotherhood, in which the artist imagines the poet's tragic death scene. I've walked that route many times on visits to Bristol. I wonder why I never noticed the house and the plaque before. Something to ponder, and to further investigate. Is there something for a book there?

To end, a bit of personal Crimefest trivia. Which two authors attending the event have lived in Uxbridge and set books there? Me, in Out of Sight Out of Mind and Nev Fountain, creator of the Mervyn Stone comedy crime mysteries. And which two authors have both been nominated for an RT Book Reviews Reviewers' Choice award? Me, for Never Coming Home  and Anthony Hays, writer of Arthurian mysteries.

Six degrees of separation or what?
Posted by Evonne Wareham at 05:00