It's supposed to be one of the staples of chick lit. Fashion, shoes, handbags. I don't really write chick lit - too many dead bodies in my books - but I do write about love. And I still like all that girlie stuff. 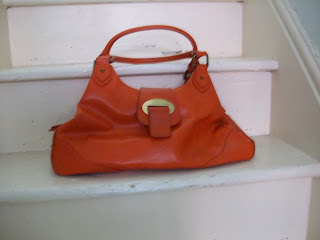 One of the deep, meaningful relationships in a woman’s life is the bond between a female and her handbag. Handbags are covetable objects – in the same realm as shoes, but I’m not talking about the outside here, but the contents – the mysterious bits and bobs that make a woman risk having one shoulder permanently lower than the other, in order to ensure that they are always within reach. I was a writer long before I discovered that there was an alternative to stuffing your essential life support system into your pockets. And it took even longer than that to figure out that handbags were desirable items, suitable subjects for LUST. But that is a completely different issue and something best kept between me and the John Lewis accessory department.

What does a writer keep in her handbag? Is it different from what a normal person keeps in hers? I’m probably not qualified to answer that question, as I’ve never been what you might call normal ...
I must confess I haven’t done a survey of writers’ handbags either, this is not a well researched academic study, but I can have a look in my own. It’s got all the usual offices – purse, keys, mobile phone. My phone is usually turned off, as I spend a lot of time in places where they are expected to be neither seen nor heard.   I won’t go into the priceless collection of paper napkins and other unsavoury stuff churning around in the bottom – old bus tickets, out of date magazine coupons. On a higher level there’s a skeleton set of makeup for the times when you start to look like one, smelling salts – I’m an old fashioned girl – hand cream, shopping lists, receipts, travel, loyalty and discount cards. In my case there is the attendant paraphernalia of being dangerously short sighted – specs, contact lenses, reading glasses. Then there is often something to read, and an umbrella. Tube maps and various items of an edible nature make guest appearances. So far, so stereotyped. But are there any signs that this bag belongs to a writer? Carrying more than one pen might be a clue. Plus a wallet with a large number of membership cards for libraries and archives, local and national – like the British Library and the National Archive. I don’t usually carry a notebook, although I know I’m supposed to. The big give away that this might be a writer’s bag is the significant amount of what is frequently referred to as ‘swag’ - mine and other people’s. Business cards with pictures of books, the pen’s again, with authors’ names on them, emery boards and lip salve, a slew of bookmarks, fridge magnets, badges and buttons - some with men in kilts. My key rings have my book cover pix on them too. All potential clues.

While I’ve been waffling, I’ve started to wonder – what would my characters carry in their bags and pockets that was distinctive? Maybe next week I will have come up with some answers?