The Inspiration Files - The Theatre

Theatre,
I'm addicted to the theatre.  I don't get to feed my habit quite so often, now that I don't live in London, but it still has a powerful influence on me. Definitely something to put in the inspiration category. 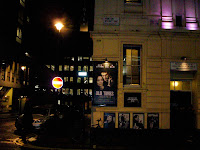 A lot of what I get from theatre is a sense of atmosphere.
The tone created by the set, the music and the lighting all have something to offer a novelist who is looking for inspiration in conveying emotion and mood. Details can be telling. And it doesn't have to be in a theatre. I've watched plays in derelict churches, in the open air and once, in a disused film studio, where it was raining inside the building as well as out. It all provides access to memories and feelings that can be called up in other very different places and settings.

I'm pretty sure that the thriller element of what I write has its roots in my early introduction to, and subsequent fascination with, Jacobean drama. Those plays explore evil in many forms and are frequently set in Renaissance courts - sumptuous and sinister. Conspirators flit from cloister to bedchamber, men and women luxuriate in velvet and jewels, Love is deep, but often illicit and usually tragic. Revenge is sought with swords and poisoned chalices - which leads directly to the last element that characterises the Jacobean playwrights - a final scene with a very large number of dead bodies. My books are contemporary romantic suspense, so I don't do much with swords - but I'm certainly guilty over the body count.

I've absorbed a lot from watching plays over the years about timing and dialogue and the way characters interact through words.  My books are heavy on dialogue and I'm sure that comes from my fascination with drama.  My love of theatre does sometimes get me into trouble.  Modern playwrights frequently steer clear of too much explanation from their characters, on the basis that people you meet in real life don't automatically open a conversation by telling their life story, and that characters on stage shouldn't either.  Which means that when it comes to editing I'm frequently asked to add the back-story and my books are longer when they've been edited.  And don't get me started on unreliable narratives.  Playwrights are often happy to embrace contradictions, evasions and lapses of memory, if it suits the character -- a bit like people in the real world -- but I rarely get away with it.
Editor 'He said X. on page 9, and on page 27, he said Y.'
Me.'Yes, well, you see... If this was a play ...' 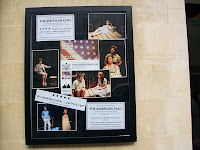 Another theatrical habit is building up the reputation of an as yet unseen character, by other characters constantly talking about the absent player, ready for a big entrance later in the play.  My last theatre trip was to see Noel Coward's Relative Values in Bath. A Hollywood starlet is marrying into an upper class English family. Everyone is talking about her, and the proposed wedding, long before she arrives. By the time she makes her entrance the audience really wants to know what she's going to be like. But take it from me - it's hard to make that work in a book.  I've been told so, often enough.  The reader, quite
reasonably, is looking to meet the hero and/or heroine as soon as possible. If that doesn't happen, confusion ensues- so I now try not to fall into the trap of the dramatic buildup. 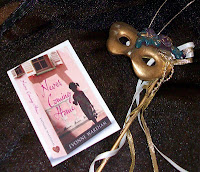 I have an unrealised dream project - to take the plot of a bloodthirsty Jacobean drama and turn it into a modern romantic suspense.  It is unrealised, and I suspect it will remain so, as I really don't think it can be done - not many of those plays have a happy ending - they wouldn't be tragedies if they did.  So that's probably a theatrical project too far, but that doesn't stop the atmosphere of the theatre transferring itself into my books.

And, of course, the theatre can be an excellent hunting ground for irresistible males who have no idea that while acting their socks off on stage they are unwittingly auditioning to be the hero in your latest story.
Posted by Evonne Wareham at 09:00