The triumph of hope

Every year, in October/November I plant bulbs. Every year I do it rather grudgingly, as it means sorting out pots and compost and other stuff in the cold and possibly the rain. And, let's face it, a bulb 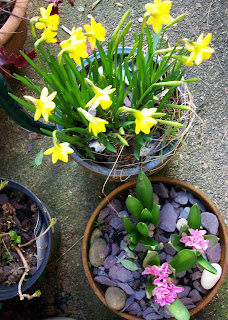 does not look like a very promising thing when you put it in the soil. But I do it because I know that in a few months time I will be very glad I did. If for no other reason than that I get flowers that come out before the snails have woken up. After that, it's a lottery.

I did it last year, and now that they are starting to flower, the few hours in the cold were worth it.

The triumph of hope - putting that small brown globe into the earth and getting back something that looks - and often smells - heavenly.

A lot of people a rather snide about romance books with happy endings. They are unrealistic. They raise unreasonable expectations. They do not reflect real life. They do not prepare the readers for the ups and downs of sustaining a relationship.

Yes - all that is probably true, But we like them anyway. The naysayers don't really get the point - that we, the readers, do understand all that, but that we want some of the good stuff too. Want to believe in love and happy ever after. It lifts us up. Life is not all about sorting washing and school runs. Alright, it is the romance that gets us into the sorting and the running. But isn't it that which makes it all worthwhile?

When you get to the end of a romantic novel it has to leave you with something positive. Something that will get you through the day. 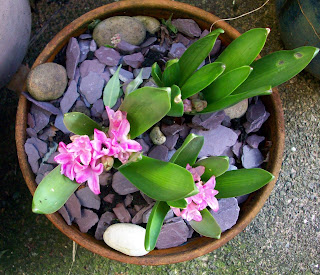 The triumph of hope?
Posted by Evonne Wareham at 07:30