I've been to a marvellous party. 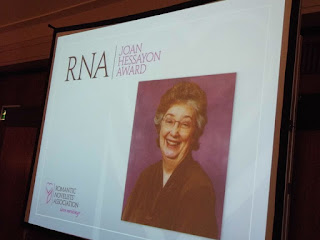 The Romantic Novelists' Association throw a good party. The summer one, which took place last week at the Royal Overseas League in London, also included the presentation of the Joan Hessayon Award for the best new novel this year. (Won by Clare Harvey for The Gunner Girl). Yes - that's the award I won, four years ago for Never Coming Home.

A lot has happened since then and not much of it to do with writing. As regular readers know, there has been a whole heap of personal stuff, culminating in an operation in March. I'm recovering slowly, and beginning to think about my writing career again. So the party was something of a stepping stone. A promise to myself that it would happen. I sat down for most of the proceedings, and was teetotal, but still had a great time. I saw loads of friends, my publisher and my editor and prospective editor. I got to hold the Joan Hessayon trophy again for a few minutes (thanks Jan). That is always a big thrill and part of the promise that I will get back out there, with more books. I also have to re-start my academic career, which is another story and a potential challenge for the writing, but I'll have to sort that out somehow.

One step at a time.

The pictures here are courtesy of RNA New Writer and photographer extraordinaire John Jackson. As always after an RNA 'do', there are dozens of photos sloshing around the Internet which give a real taste of the atmosphere, I've been totally vain and picked two that I'm in from the many John took.

The official RNA photos are also to be found HERE  Including one of me as a Choc lit editor sandwich - between Lusana, who has done a fab job on the novella, which will see the light of day - we promise - and Jane, who will edit my new romantic suspense, when I manage to produce one. I don't remember it being taken, but I'm glad it was.

Another little piece of that promise.

One step at a time.