Trains and boats and planes. 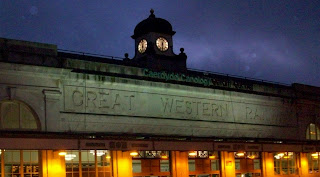 I don't drive. Which means I rely on public transport. A lot. Which has it's good side, as I can write on trains and eavesdrop/people watch on buses. And shiver and clutch at the seats on airplanes. Not keen on flying. But it is a crash course in fear, which can be useful when you write romantic suspense.

I found a book in the library on rail journeys in Britain yesterday, and am having great fun planning trips and the books to go with them.  Which got me thinking about transport in general, and how it can be romantic and scary. Chases across moving roofs,mysterious strangers, murders in first class compartments,dining cars, sleeping cars, steam locomotives.

I'm sure I could think of more, but that's enough to keep me busy for about 10 years.