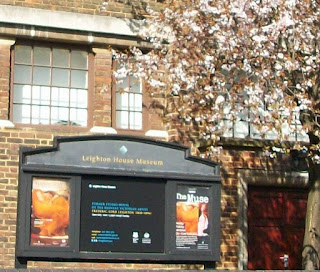 I spent a fabulous few days in London last week - I was at the Romantic Novelists' Association Awards on Monday night and was able to cheer home several friends who won. On Tuesday I was at the London Book Fair at Olympia and had the chance to talk to my publishers, Choc-lit, about the book that we both hope will be out this summer! More of that at another time - then you'll be fed up with hearing me talk about it!

On Wednesday I caught up with an exhibition that has been on my radar for a while, but I wasn't able to make it to London. This time I managed it, and just in time, as it will close in a few weeks. It was possibly appropriate too, as apparently Leighton House has been voted the country's most romantic museum. And the painting I went to see has some mystery in it's past. And I love mysteries. Romantic suspense?

When I lived in nearby Chelsea, many moons ago, I often visited Leighton House, the former home and

studio of the painter Fredric, Lord Leighton. It's an unusual building - in some ways everything you
would expect from a Victorian home, but with an artist's studio on site, a secluded garden and a fabulous Arab Hall, with mosaics and tiles and a working fountain. It wasn't a family home, Leighton lived there alone and his modest bedroom is one of the rooms open to the public, but it was a working studio and also housed the painter's own art collection.

The reason I particularly wanted to re-visit was the exhibition centering on the painting Flaming June, which was one of the last paintings Leighton exhibited at the Royal Academy before his death. The sumptuous painting - and I think that is an appropriate word - of a woman in a flimsy orange gown, sleeping under an awning on a marble terrace beside a glittering sea, has become one of the painter's most well known works, frequently reproduced.

The curators have recreated the exhibition of six paintings that were sent to the Royal Academy for the show in May 1895. Leighton was President of the Academy, but by then was an ill man, and was unable to attend the private view and banquet, as he was travelling for his health, hoping that warmer weather in North Africa would aid his heart condition. The exhibition shows not only the six paintings - all of which are worth seeing and which have been assembled from various collections around the world - but sketches and preparatory work that was done and influences that can be seen in Flaming June. It spoke a lot to me of the effort that has to go into any creative exercise, and the determination and desire to continue to create, even when suffering from illness. Food for thought.


Photography inside the building, and of the paintings, is limited,  so I have pictures of the outside of the building and my postcards. I sat in the room with the paintings for quite a while and it was wonderful to have that opportunity, knowing that this was the place in which they were first brought into life.

You can see more about the exhibition from the Museum website, HERE.