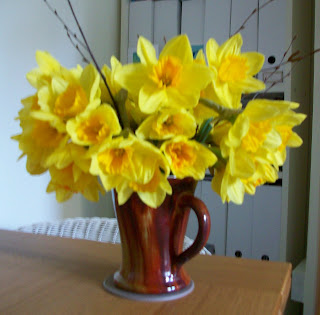 I think March may well be my favourite month of the year. More daylight, weather improving, things in gardens coming into bloom, and the summer still to look forward to. I've had a Wordsworth of daffodils, in a variety of pots, and now the tulips and the Forsythia are having their turn. The latter is bitter sweet, as it was a stalk that my mother planted and, like everything she planted, it rooted and grew. And now I have it in a pot as a standard. I think her walking stick would have sprouted if she had left it in the ground long enough.

And it's not just in the garden that things are growing. Last Friday I went to lunch with the lovely authors from the Wye Chapter of the Crime Writers' Association, which involves a bus ride from Hereford to Ross, and back again. All sorts of pale green stuff was sprouting in the hedges, making me feel cheerful just looking at it.

So, Spring is doing its thing, and I'm also having a go at reinventing myself.

This year there will be a book. Yes, really. Fairly soon, I hope. It has a title, and a series title and eventually it will have a cover and a release date. And - as with the addition of an epilogue which no one at Choc-lit has read yet, but I hope they will like -  it has now tipped over the 60,000 word mark, it's no longer a novella, apparently, but has been promoted into a book.

So in it's honour, I have been streamlining and sprucing up my various social media profiles. Soon there will be pages on Facebook, and a Newsletter and I will be harassing everyone to 'like' and sign up. I'll let you know when. Actually, I will probably be difficult to avoid. But for the moment I'm just looking at my biographies and all that stuff. And thinking about what I should say to reflect the person I am today. As you know, the new book - I love saying that - is not romantic suspense. More like romantic comedy, with people running about on the Riviera, in the sunshine. I'm still thinking about that one, but in the meantime I'm looking at the words that define me at present.

For the last few years the main word would have been 'carer' and after that, 'convalescent' but now I'm moving on, or trying to, so for the time being I've chosen something simple -  'writer, historian and mature student'.

It's Spring, and I'm looking forward. I hope it's going to be a lot of fun.