Are you ready for this? 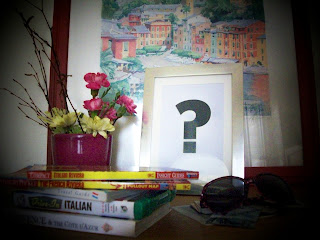 No, it's not a cover reveal, but I did think it was time I told you the title of the new book. As I've said, often, it is not romantic suspense. No dead bodies in this one. (You'll have to wait until Christmas for more of them) It does have a mystery in it, which is what gets the hero and heroine to the Riviera, chasing a couple of crooks. I had in mind all those romantic comedy films from the 40s and 50s  - glamorous settings and sunshine and fantastic scenery and beautiful people and luxurious villas and fast cars. And food. There's quite a bit of that too. It's a summer book. A holiday sort of book and I hope that it's going to be the first of a series. It had to have a holiday type name and after a meeting with my publisher at the London Book Fair, it got one. Very simple, but sums up everything about the book.

So, now, drum roll, please - It's going to be called Summer in San Remo and that's exactly the sort of mood I was after.

And the series title? Ah, now that was suggested by the lovely Kath, from The Nutpress, right here on the blog. The whole series will be  Riviera Rogues. All of them will have a mystery, sunshine and a holiday feel - and the rogues won't all be just the villains. Some of the heroes have a way to go before they win their heroine. Starting with Jake ...

I'm looking forward to a bit of lighthearted fun, in amongst the darker stuff, and I'm already thinking of all the places that can be categorised as 'Riviera'.

Oh, and that cover reveal? It will happen, I promise.
Posted by Evonne Wareham at 07:30