Being able to read 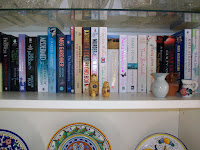 I was in a stationery store the other day. Writers, stationery - it's a thing. Anyway, there was a gratitude diary with pages to record things you were grateful for, with a series of questions to answer. I didn't buy it - such restraint, but it did make me think. And that got coupled with reading a short story from Veronica Henry. It's called The Apple Orchard and it's currently free on Amazon with a large chunk of her next release, The Forever House in the back. The short story is a bitter sweet one, a bit of a tear jerker, actually, and features a character who is unable to read. I don't think that's a spoiler, as he says it on the first page.

It made me think about being able to read, and how life would be if you couldn't, and all the things I have read, in the last few days, starting with that short story

The power to be able to read, and it is a power.

Something to be grateful for.