Regular readers - you know who you are, and thank you - will know that I usually make a trip to London in November, to attend the Romantic Novelists' Winter Party. Actually, I will jump at any reason for a trip to London, but this is an especially good one. I hadn't actually been away anywhere since submitting the PhD, so I had a few extra days, with the party as the high spot at the end. 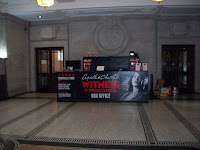 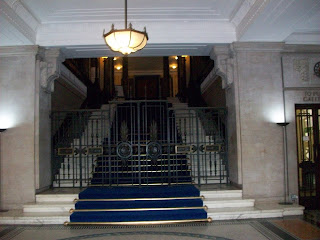 As I stayed in the Premiere Inn at County Hall, the first night I got myself a ticket for Witness for the Prosecution, which is an Agatha Christie court room drama which is staged in the old Council Chamber for the Former Greater London Council. Not a really a court room, but it was very atmospheric, the acting was good and I enjoyed it. I also had a chance to see the posh end of a building I used to visit many moons ago when working for a London Borough, like any public building, plenty of boring offices behind the facade. I was particularly interested in wall plaques with the names of former leaders, including Herbert Morrison who left in 1940 to become Home Secretary in Churchill's wartime cabinet. He gets a few mentions in the PhD as a result.

Next day I did a very special exhibition at the National Portrait Gallery on the PreRaphaelite Sisters - the women who inspired, modelled for and generally supported the more famous male painting group. The exhibit was the best I have seen for quite a while, staggering in the amount that these talented and dedicated women achieved, largely out of the spotlight, as well as raising a family. I'm sure they will find their way into a book sometime. After that I took myself off to afternoon tea in the National gallery next door and then to see Ian McKellen in his one man show which is touring the country to celebrate his 80th birthday. His Richard II was my first experience of seeing professional Shakespeare in the theatre. I'm not admitting how long ago that was, but it got me hooked and it has
been down hill ever since. 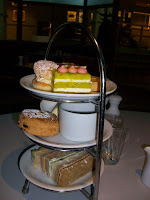 Thursday was the party. I didn't take pictures - camera wouldn't fit in my handbag, just as I didn't fit in the first three outfits I was hoping to wear. PhD spread!! It was a new venue, lots of space and lots of old friends. Plenty of pictures on the RNA website, if you want to have a look.

In between I found lots of locations and ideas for future books, including the Christmas market on the South Bank and a very very grand and expensive apartment blocks where a future heroine is going to live. All in all, it was a very good trip.