Writers have a variety of techniques for sorting out the stories that run riot in their heads. I know one who allegedly wraps a roll of wall paper all round the room and plans the whole thing on that. Post-it notes, in various colours, are very popular. One of the more artistic ways is to make a story board. An author will collect pictures - hero, heroine, the dog, the perfect cottage, the car ... you get the idea - and put them together like a collage. It always looks like a lot of fun, although I'd worry about getting a bit obsessed with collecting, rather than writing. That comes under the heading procrastination, and we all know how authors love to do that!

I don't use pictures of people, my characters usually arrive in my head without that, but I'm wondering about doing a bit of story boarding of things and places for future books. I already do it in a small way, as I have a bag of odds and ends that are going to fit into a story sometime, but they tend to be written stuff, not visual. I like to create location tours for books, but those are usually done after the book is written, not before. 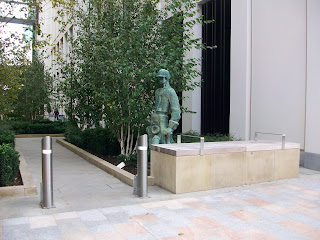 When I was in London last week, I took a few pictures of interesting things, including this one, of a garden area in a very up market block of apartments It looked even prettier lit up after dark. I made up  my mind then that someone was going to live in one of those apartments, and soon came up with Romily, who is a actress with a very rich daddy, who could certainly afford to buy her one - maybe it was a birthday present. She's not going to be appearing in a book for some time though, as she is heroine of book three of a romantic suspense trilogy.

Which gives me plenty of time to collect some more pictures to make a board.