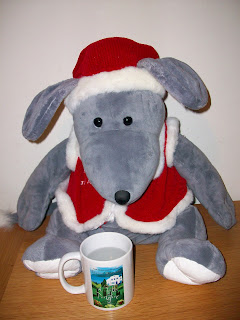 You know by now that my fellow Choc-lit and Ruby authors have conspired together to convince me - a Christmas sceptic - about the joys of the festive season. So how is that working out? Have the efforts of Ella and Helen, Angela and Berni had an effect? Well, Timmy says they certainly worked for him, and he insisted that I should find his Christmas hat and coat. I must admit he looks very smart in it. Me - maybe we still have a way to go? Today I have a guest author who has made a bit of a speciality of writing festive books for Choc-lit. Kirsty Ferry has a new paperback version of her 2019 e-book for Choc-lit out - Christmas in the Isle of Skye  and she also has a brand new book for Ruby fiction- Christmas of New Beginnings. That's versatility.

Now I have my mug of advent calendar tea - a festive fruit mix of fruit and chocolate called Chocolate Fondu and today's chocolate nibble, a dark chocolate penguin, and am all ready to let Kirsty persuade me.  She's chosen to highlight four topics from the books that are vital parts of Christmas.

Over to you, Kirsty.

In Christmas of New Beginnings, Cerys and Edie try to plan their Christmas lunch around the timings of Edie’s favourite festive films, Holiday Inn and Willy Wonka,’ but it doesn’t bode well when it’s not a fuss-free meal. When it looks like Frosties and milk are on the menu, Lovely Sam swoops in to save the day. My favourite Christmas films are Elf and Muppets’ Christmas Carol. Elf is for when I wrap my presents and the Muppets are for Christmas Eve. It’s a festive feel-good tradition!

In Christmas of New Beginnings, Cerys owns a craft shop and tea room, and arranges a village Christmas Craft Fair, and in Christmas on the Isle of Skye, Ivy has her little jewellery business in Glastonbury, and Zac has his in Skye. It’s all the more important to buy artisan or to buy from small businesses this year – I absolutely love quirky Christmas craft fairs…helped along the stalls by a good glug of artisan mulled wine and a home-made mince pie, of course.

Respecting other’s beliefs and being kind

A weird one, perhaps, but in Christmas on the Isle of Skye, Ivy and Zac embrace the winter solstice celebrations in Glastonbury, as well as the traditional Christmas they are used to having. Not everyone will have the same traditions and feelings about Christmas as we ourselves do, so it’s important to remember to respect other people and understand that they might not want a big celebration, but just prefer something on a smaller scale. If it works for the person involved, then know that is absolutely fine.

I think those four are really good choices - sadly I'm not sure we will be able to meet with family and friends in quite the free and easy way we were all hoping, but remembering them is still important. I'm really with Kirsty on the last one - one of the things that I dislike about December is the darkness and the cold and I do have a little celebration for myself for the solstice and light a candle, because it marks the point when we start going forward into the light again. I'm glad that Kirsty has reminded me about this.

Has she succeeded in winning me round? You'll have to wait until later in the week to find out. I still have that empty tree, remember ... 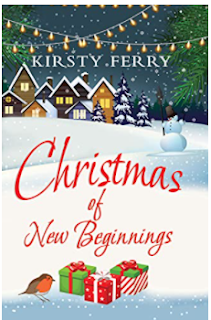 Folk singer Cerys Davies left Wales for the South Downs village of Padcock at Christmas, desperate for a new beginning. And she ends up having plenty of those: opening a new craft shop-tea room, helping set up the village’s first festive craft fair, and, of course, falling desperately in love with Lovely Sam, the owner of the local pub. It’s just too bad he’s firmly in the clutches of Awful Belinda …

Perhaps Cerys has to learn that some new beginnings take a while to … well, begin! But with a bit of patience, some mild espionage, a generous sprinkling of festive magic and a flock of pub-crashing sheep, could her fifth Christmas in Padcock lead to her best new beginning yet?

You can buy the book HERE

Christmas on the Isle of Skye is part of Kirsty's series that includes Spring at Taigh Fallon, Summer at Carrick Park and Jessie’s Little Bookshop by the Sea.
How far would you go to be with the one you love at Christmas?The Isle of Skye is a magical place, especially at Christmas, and there’s no place Zac Fallon would rather be. But whilst Zac has everything he needs on Skye, there’s still something missing – and that something is a somebody called Ivy McFarlane.Ivy used to work with Zac but then spread her wings and moved to Glastonbury. He’s missed her ever since. Now it’s almost Christmas and Zac realises that the Ivy shaped hole in his life is too big to bear. So starts his festive mission to the mainland – but will he be back in time to spend Christmas in Skye? And, more importantly, will Ivy be with him?

You can buy this one HERE 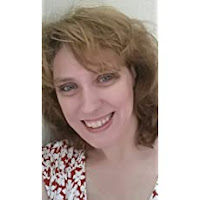 If you are are looking for one more Choc-lit festive read and haven't treated yourself to Marie Laval's 2019 book Bluebell's Christmas Magic yet - that one is now out in paperback too. HERE
Posted by Evonne Wareham at 07:30