A Trip to the English Riviera

Ever since I began the "Riviera" series I've had it in mind to set a book on the English Riviera. Now I've finally done it. The WIP opens in Torquay, which is not only on the Riviera but also has numerous connections with the "Queen of Crime" Agatha Christie. The book has Christie type overtones as it begins with a house party during which a valuable necklace goes missing. Add in that the necklace is alleged to have belonged to Cleopatra, among others, and you can tell how much fun I have had with this. And don't worry - the grand finale takes place in Monte Carlo/Monaco - so there is some Mediterranean sunshine in the mix too.

My trip to Torquay for the Crime Writers' Conference gave me the opportunity to prowl the town and  get some pictures for atmosphere. I thought I would share a few of them below. 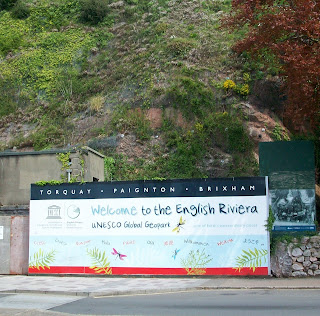