Its a bit hectic around here.

Life has been little chaotic for the last few weeks, but it is settling down now. I hope so, as I do have a book I want to finish and get to my publisher!

After the excitement of the CWA conference I came home and went straight into having my bathroom re-modelled. Long story, but the short version is that my shower sprang a leak and attempts at having 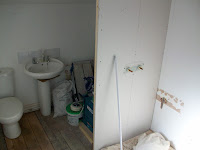 a bath after many decades were traumatic in the extreme. You've heard the one about the three old ladies. This was one old lady who having got in, couldn't get out. The work took twice as long as it was supposed to, and I decamped to the nearest hotel for a couple of nights in order to be able to enjoy - gasp- a working shower. The picture is work in progress, which gives you an idea. The shower is done now, and it is beautiful. Still stuff to do in the room, notably the floor, but we will get there.

In amongst all this, lovely and longstanding book buddy Margaret James had invited me in January to be a guinea pig for a new column she was trying out in Writing magazine, and the feature, Five Quick Questions was published in the latest addition. Many thanks to Margaret. It was fun to do and I hope it will give readers an insight into how I got where I am today. It was a long journey. Never give up should be the writers' motto. 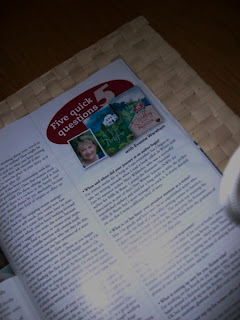 Having got the bit between my teeth I am now attempting to organise other work that needs doing around the house and of course get that book done. The end is nearly in sight, I hope. It got a boost yesterday when the RNA Cariad Chapter had another on-line retreat day, again beautifully organised by the tireless Jessie. It gave the work a boost, as I had no excuse to be diverted to house type stuff.  And it was fun. So good to have support and hear about what other writers are achieving during their day.

The book is top of the agenda for next week. Wish me luck.