The week before last I made my first visit to the London Book Fair.
Why?
1)I was curious.
2) My publishers, Choc Lit, would be there.
3) I knew that a number of friends would be there too.

So I treated myself to a short trip to London and spent Monday at the Fair. I enjoyed it - as I said, I was curious, and it was in the nature of a fact finding mission - I had no particular plans of what to do or see. 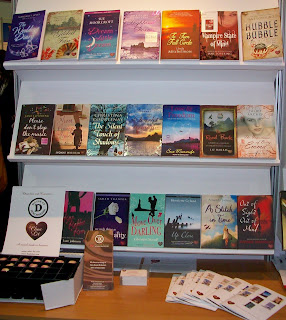 Overall impressions? That there are an awful lot of books out there - so many stands, each with a colourful display. It was fun to find that many of those dedicated to romance were being staffed by friends. I got used to being hailed as I wandered along, gawping. I was disappointed that I couldn't find one presenting books from Wales, as Scotland and Ireland were attractively represented. I didn't find any Welsh publishers, either, among the displays, or on the lists of exhibitors. If they were there I missed them, although Aberystwyth University had a presence and were very busy at Literature Without Frontiers. It was exciting to see best sellers from people I know featuring on the revolving photo displays on the biggest stands. Trisha Ashley's Good Husband Material  looked particularly pretty as it hove periodically into view. I picked up a small amount of swag - mostly pens. I failed to get into any of the seminars in the Authors' Lounge, which looked to be heavily over subscribed. And, of course I admired the Choc Lit presentation, especially as there were two book of mine on display. Also chocolate truffles from House of Dorchester. I had lunch with my publisher and fellow authors and chatted to all sorts of interesting people. It was fun, and I shall definitely go again. Now that I know what is on offer I'll organise myself a little more next time, to take advantage of the chance to listen to speakers and maybe imitate the real movers and shakers and arrange appointments with a few influential people - although at this stage who they might be I have no idea!

The next day it was books in a different kind of display. The British Library's small but beautifully curated and researched A to Z of crime writing. Some interesting and memory provoking choices, from the Golden Age to the Mean Streets. It seems that the idea of a celebrity penning a novel is not as new as you might think. I certainly didn't know that the footballer Pele had his name on a crime novel! I also discovered Ronald Knox's Decalogue - ten golden rules for writing crime, which were prominently displayed. I've broken at least two and a half of them.

I also managed to take a few more pictures for the location tour for Out of Sight Out of Mind. And a whole cache of research material, in and around Trafalgar Square, for the (maybe) new book. Having looked at the site, I'm going to have to re-model the perimeter of the Square quite a bit. D'you think anyone will mind?
Posted by Evonne Wareham at 09:00